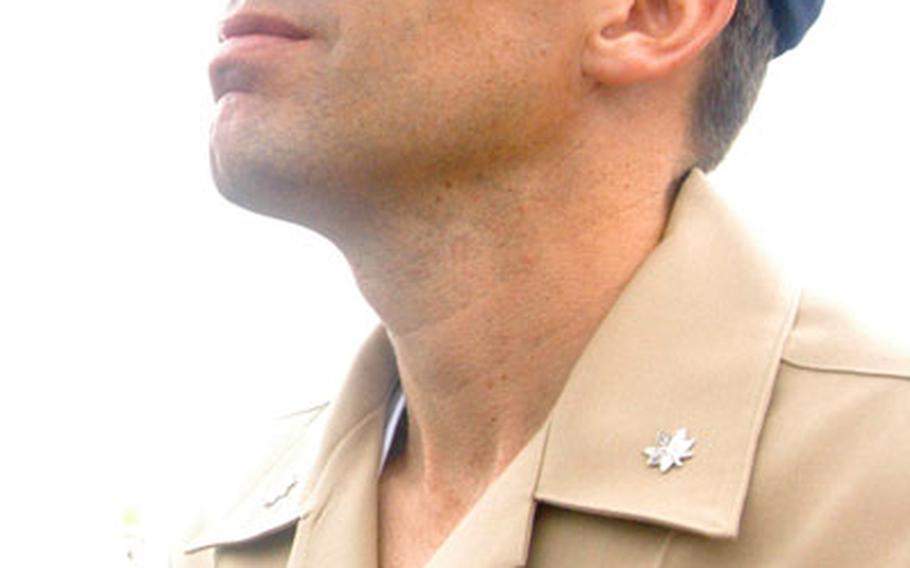 Cmdr. David Chase, commanding officer on the USS Vandegrift, will emcee Saturday’s “turn-over” ceremony when the USS Mustin destroyer arrives from San Diego to take the Vandegrift’s place at Yokosuka Naval Base, Japan. The frigate leaves for good in August, but Chase will change commands before that. (Allison Batdorff / S&S)

Cmdr. David Chase, commanding officer on the USS Vandegrift, will emcee Saturday’s “turn-over” ceremony when the USS Mustin destroyer arrives from San Diego to take the Vandegrift’s place at Yokosuka Naval Base, Japan. The frigate leaves for good in August, but Chase will change commands before that. (Allison Batdorff / S&S) 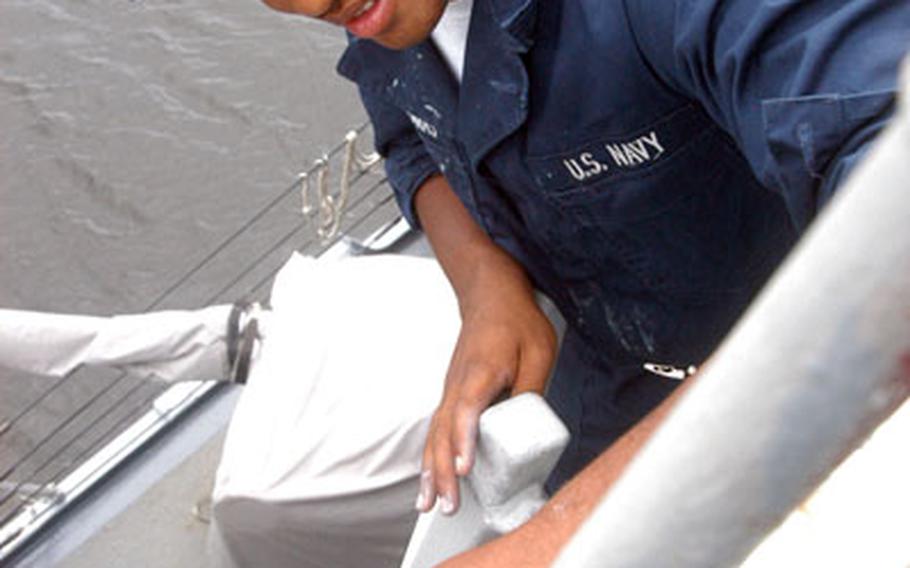 Seaman Eric Thomas serves on the USS Vandegrift but will change over to the USS Mustin when the destroyer arrives from San Diego to take the frigate’s place. (Allison Batdorff / S&S) 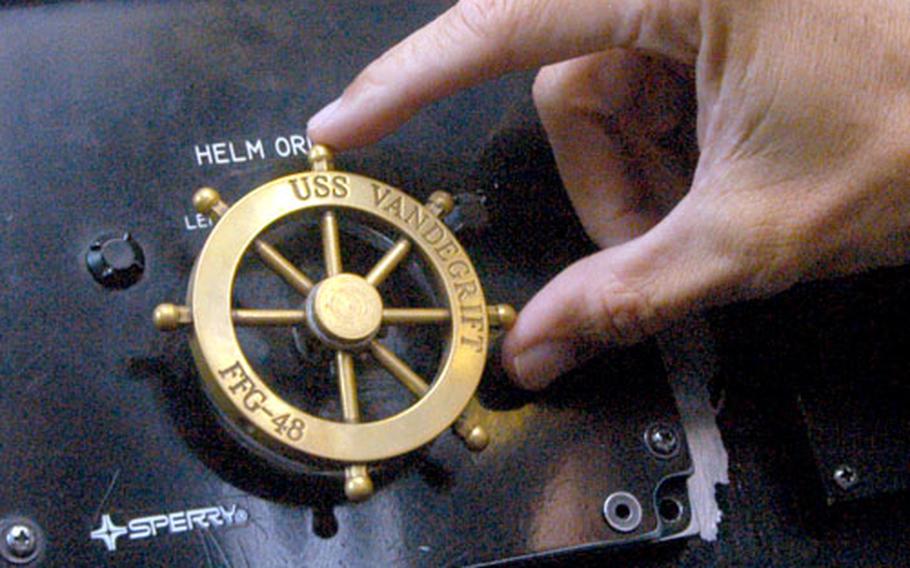 As a frigate, the USS Vandegrift is smaller, narrower and has less crew then her cruiser and destroyer peers. The wheel is smaller too, but it moves the ship the same way a larger one does. (Allison Batdorff / S&S)

Thomas, along with about 70 Vandegrift sailors, will &#8220;cross decks&#8221; to the USS Mustin, the Navy&#8217;s newest Arleigh Burke-class destroyer, coming to take the 12-year-old frigate&#8217;s place in the forward-deployed naval forces.

The Mustin hails from San Diego and is to arrive Saturday at Yokosuka Naval Base.

This poses a challenge for the crew swap, as some jobs don&#8217;t translate between ships, he said.

For example, a Vandegrift gunners&#8217; mate operates a 76 mm rapid-firing gun. One on the Mustin &#8212; commissioned in 2003 and equipped with the Navy&#8217;s most modern combat weapons system &#8212; will deal with missiles, torpedo launchers, an electronic weapons system and a 5-inch gun.

Crews started integrating in January and leadership is planning to conduct on-the-job training, Chase said. They also will use the month between Mustin&#8217;s arrival and Vandegrift&#8217;s departure to &#8220;impart wisdom about living in Japan,&#8221; he said.

The frigate has been forward deployed for 10 years and has been a &#8220;workhorse&#8221; in terms of operational tempo in the Pacific, he said. Beyond returning to San Diego in August, the Navy&#8217;s long-range plans for the Vandegrift are unknown, said Chase.

In general, the Navy plans to phase out all of the frigates by 2020. About half of the Navy&#8217;s 61 Oliver Hazard Perry-class frigates, like the Vandegrift, have been decommissioned. Others are being used for counter-drug operations, Chase said.

For his part, Chief Petty Officer Gerald Stanker, an operations specialist, anticipates a &#8220;steep learning curve&#8221; when he switches over to the Mustin. There are more &#8220;whiz-bang toys&#8221; on the Mustin that operations specialists must do manually on the Vandegrift, he said. But he gets more office space on the new ship, he said.

Shipping in: A ceremony welcoming the USS Mustin will be at 3 p.m. Saturday at Yokosuka Naval Base.

Shipping out: A farewell ceremony for the USS Vandegrift will be held Aug. 10, time and place to be announced.