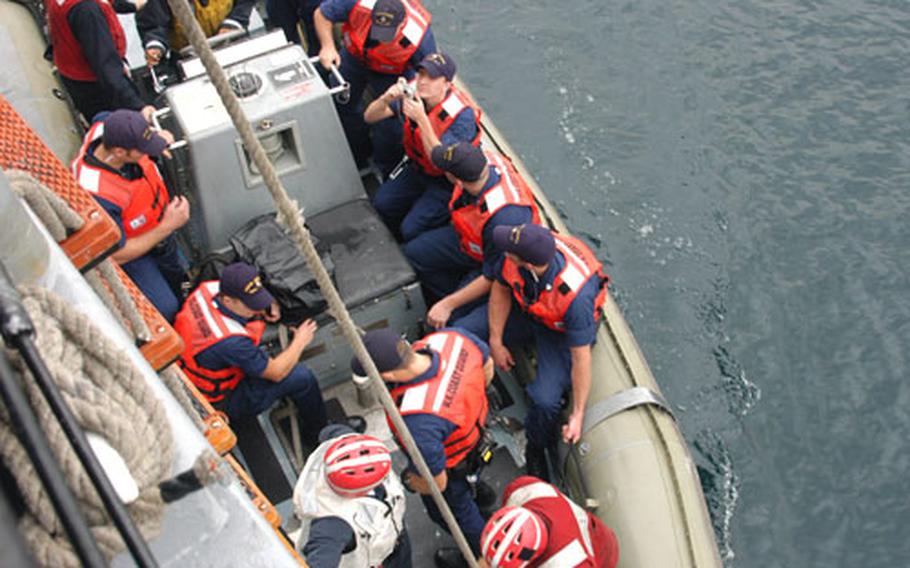 A Coast Guard law enforcement team from Alameda, Calif., prepare to leave the USS Vandegrift to zip over and board a Japanese ship pretending to carry weapons of mass destruction in Tuesday’s exercise under the Proliferation Security Initiative. The training was held in Sagami Bay, north of Yokosuka Naval Base, Japan. (Nancy Montgomery / S&S)

ABOARD THE USS VANDEGRIFT &#8212; Cameras flashed and scores looked on as a team from the U.S. Coast Guard climbed from their rubber boat up the ladder to the deck of the merchant ship American Summer.

It was a little tense. Just minutes before, in a highly scripted decision, the ship had defied orders to stop and tried to outrun the USS Vandegrift.

The captain said he was in a hurry. And no wonder. After a search by the Coast Guard and French and Australian customs officials, clear plastic bottles imprinted with skulls and crossbones were found in the hangar. In the script of the event, the substance was sarin, a weapon of mass destruction.

The American Summer was, in fact, a Japanese Coast Guard vessel called the Izu, and aboard it were media, dignitaries, admirals, one U.S. undersecretary of state for arms control and international security, and observers from some 14 nations.

All were there Tuesday to see the first drill ever in Asian waters to practice intercepting weapons of mass destruction under a multinational initiative to find and seize such weapons as they&#8217;re transported by sea.

The exercise, under the Proliferation Security Initiative, was held in Sagami Bay, just north of Yokosuka Naval Base, Japan. But everything that was done &#8212; with Japanese ships and helicopters; ships from the United States, France and Australia; and a team of Coast Guard law enforcement specialists from Alameda, Calif. &#8212; was under the auspices of maritime forces of Japan, which hosted the exercise.

For the people involved on the Vandegrift, however, the exercise was a gift.

There were two parts to the exercise, with the first, involving the Japanese, being the most spectacular. In that portion, the first of the day, the skies filled with seven Japanese helicopters circling over two ships.

&#8220;That&#8217;s a lot of helicopters flying around,&#8221; Cmdr. Jon Bernard, spokesman for the Kitty Hawk battle group, enthused as he watched from the Vandegrift.

One ship, the American Summer, was flying a U.S. flag; the other, the Yokohama Autumn, flew a Japanese flag. Both, a variety of intelligence had it, might be involved in transferring WMD. (Both suspect ships were played by Japanese coast guard ships).

Japanese coast guard crews boarded the Japanese ship &#8212; &#8220;fast-roping&#8221; in along thin ropes from helicopters onto the vessel, ninja-style.

In the scenario, rehearsed many times, it was determined that that ship was carrying sarin or a &#8220;sarin precursor.&#8221;

The ship was ordered to Yokohama port, and the next phase of the exercise began.

In an actual interdiction mission performed by the Navy, either Coast Guard law enforcement teams or Navy SEALs usually would be on hand to do the boarding of other ships, Chase said. That&#8217;s in large part because of the Coast Guard&#8217;s experience in boarding and conducting thorough searches and its familiarity with international laws of the sea that govern which ships in what waters can be boarded. The SEALs would be used in more threatening environments.

A French team from the Vandemaire, then Australian customs officials and sailors from HMAS Arunta followed the Coast Guard aboard the Izu.

The end of the exercise came when the Coast Guard informed the American Summer captain his voyage had come to an end. &#8220;We let the captain know we were terminating his voyage because we found sarin gas onboard,&#8221; Smith said.

What then would be done with the ship and its deadly cargo &#8212; which port to take it to, whether the port would accept it and how to get it there &#8212; was not part of the exercise.

For the Coast Guard, Tuesday&#8217;s exercise was a plum assignment. Making it especially interesting, Smith said, was &#8220;that we&#8217;re working with an international force and learning the different ways the different coast guards conduct boardings.&#8221; Coast Guardsmen did not, however, carry their standard weapons assortment: Pistols, batons, pepper spray and handcuffs were not allowed in the exercise.

Tuesday&#8217;s drill was the 12th of its kind since September 2003, when the United States led 14 countries to form the PSI. The effort now has the support of 60 nations, according to the United States

Although the exercise largely was to have different agencies train together and practice their skills, it also served as &#8220;a useful deterrent to companies that otherwise might be tempted to do business with proliferators like North Korea,&#8221; according to remarks made last week by John Bolton, U.S. undersecretary of state for arms control and international security.

Bolton was aboard the Izu on Tuesday, leaving by helicopter when the exercise concluded.

Although the 7th Fleet is expected to focus more this year on efforts to determine which ships are carrying what in Asian waters, most of the Vandegrift crew had not been briefed on Tuesday&#8217;s exercise.

But the Vandegrift has done interdictions before. In 2003, in the Straits of Hormuz, Vandegrift crews under United Nations&#8217; mandate boarded tankers, cargo vessels and &#8220;anybody who came from Iraq,&#8221; said Lt. j.g. Nick Nordvall. Almost all the ships cooperated and nearly all were &#8220;just merchant guys trying to make a living,&#8221; Nordvall said.

The Coast Guard team, though, is tasked primarily with visiting and boarding ships for a variety of reasons, and not everything they find is benign. Smith said a team he once was on found some 100 people being smuggled into the United States on a ship flying no flag near the California coast.

Petty Officer First Class Mike Aguilera said a team he was on found $27,000 on a 20-foot sailboat in San Francisco Bay owned by a foreign national without the proper papers.