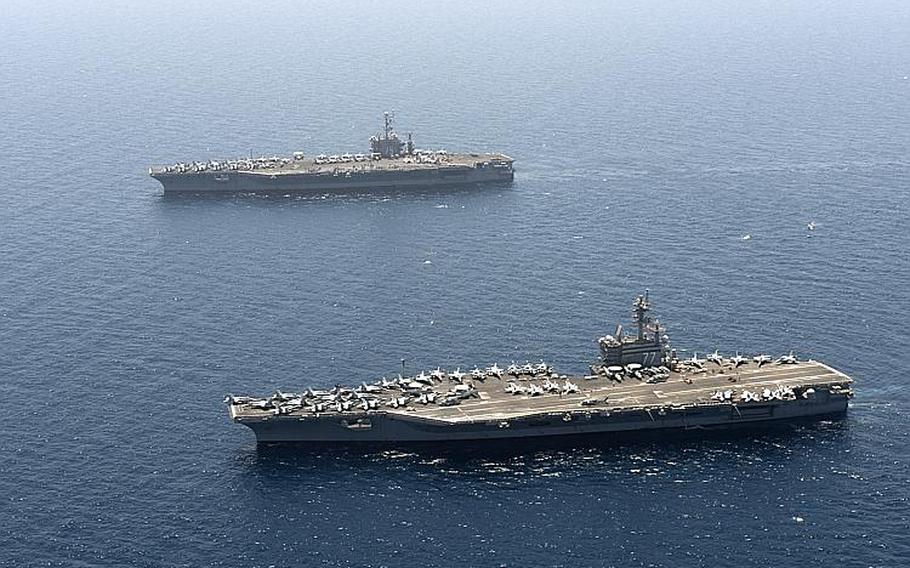 MANAMA, Bahrain — The USS Harry S. Truman strike group has completed its Middle East mission, and the end of its lengthy deployment is in sight.

The group, which includes the aircraft carrier USS Harry S. Truman, two guided-missile cruisers and two guided-missile destroyers, transited the Suez Canal on Saturday into the Mediterranean Sea after spending seven months in the 5th Fleet area of responsibility, the Navy said. The ships may stop at some liberty ports on the way back to the United States.

“Despite the many security challenges throughout the Middle East, the Truman Strike Group demonstrated America’s commitment to this region and certainly enhanced the level of trust and confidence our partners have with us,” Rear Adm. Kevin Sweeney, commander of the carrier strike group, said in a news release.

The Norfolk-based Truman deployed in July on a scheduled deployment of eight to nine months. It arrived in the Middle East in August during the height of tensions with Syria over use of chemical weapons.

The flattop spent five weeks conducting carrier operations with the French carrier Charles de Gaulle. During combined operations, U.S. F/A-18 Hornets and Super Hornets landed and launched from the French carrier, while French Rafale fighters did the same from the Truman — a rare occurrence that took more than a year of planning.

While in 5th Fleet the Truman conducted more than 2,900 sorties in support of Operations Enduring Freedom, Capt. Robert Roth, commander of the USS Truman, said in a note posted on the ship’s Facebook page.

“The ship and air wing’s knack for operating seamlessly with one another is a testament to the focus, commitment and resolve of your Sailors and Marines, which ultimately enabled us to support the coalition troops on the ground in Afghanistan. I could not be more proud of such a talented and amazing crew!” Roth wrote.

After a slight delay, the USS George H.W. Bush Carrier Strike Group has now replaced the Truman in the Middle East. The Pentagon held it up in the Mediterranean Sea for a few days to reassure allies amid the turmoil in Ukraine.