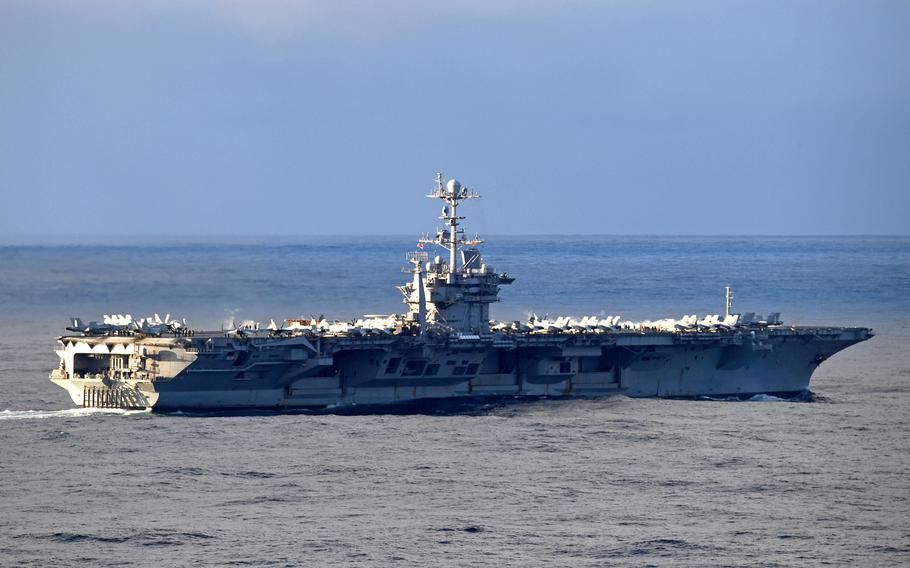 The USS Harry S. Truman transits the Vestfjorden off the coast of Norway, Oct. 24, 2018. Two of its sailors were arrested in Lisbon, Portugal, on Monday, Nov. 12, on suspicion of assaulting a taxi driver while on shore leave. (Thomas Gooley/U.S. Navy)

Two sailors were arrested Monday on suspicion of assaulting a taxi driver and stealing his cellphone while they were on shore leave from the aircraft carrier USS Harry S. Truman in Lisbon, Portugal.

The sailors were released to U.S. authorities and are back aboard the carrier, Navy officials said Wednesday. They said that the Portuguese justice system will handle the case.

“The personal behavior of the two sailors is not in keeping with the standards and expectations of the U.S. Navy or Harry S. Truman,” spokeswoman Lt. Cmdr. Laura Stegherr said in a statement Wednesday. “We offer our sincerest regrets and apologies to the gentleman involved in the incident and to our gracious hosts in the city of Lisbon.”

A taxi driver told Portuguese police that two American sailors assaulted him and took his phone at about 2 a.m. on Monday after he picked them up in Lisbon, the Portuguese news outlet Cofina Media reported.

The driver was treated at a hospital for injuries, Cofina reported. The sailors later appeared in Lisbon criminal court with a lawyer and representatives from the U.S. embassy and Portuguese navy.

Portuguese authorities were not immediately available for comment, and it was not clear Wednesday whether charges had been filed.

The incident occurred while the aircraft carrier was making a port stop in Lisbon after participating in the NATO exercise Trident Juncture in the North Atlantic.