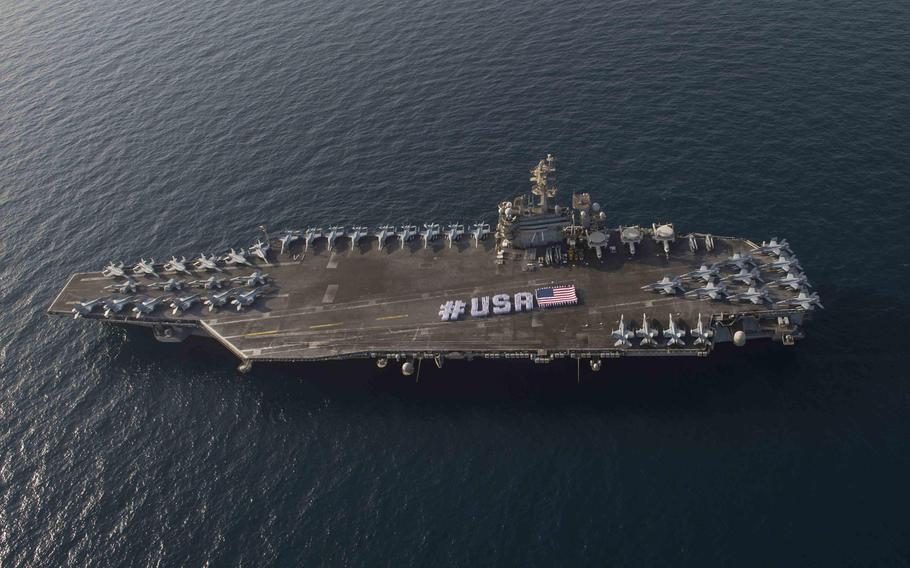 Sailors spelled out #USA on the flight deck of the aircraft carrier USS Theodore Roosevelt last month ahead of the Independence Day weekend. The Roosevelt, currently deployed in the Navy's 5th Fleet area of responsibility, arrived on a port visit to Bahrain Sunday, July 19, 2015. (Jackie Hart/U.S. Navy)

The Norfolk-based Roosevelt is the flagship of the Theodore Roosevelt Carrier Strike Group, which comprises five ships with more 6,000 sailors and Marines who are halfway into their eight-month deployment. The Roosevelt has been in the Middle East since April conducting airstrikes on the Islamic State group in Iraq and Syria.

For a few days in April, the Roosevelt was positioned near Yemen while Pentagon officials tracked an Iranian convoy they suspected of carrying arms to Houthi rebels.

The Roosevelt’s most recent port visit was to Dubai in June. It last stopped in Bahrain in May.

Following the port visit, the Roosevelt will continue its support of coalition air strikes against the Islamic State group.

At the end of its tour, in the 5th Fleet area of responsibility, the Roosevelt heads to San Diego, its new home port, as part of a three-carrier shift, which will also send the USS Ronald Reagan to Yokosuka, Japan, and the USS George Washington stateside for nuclear refueling.