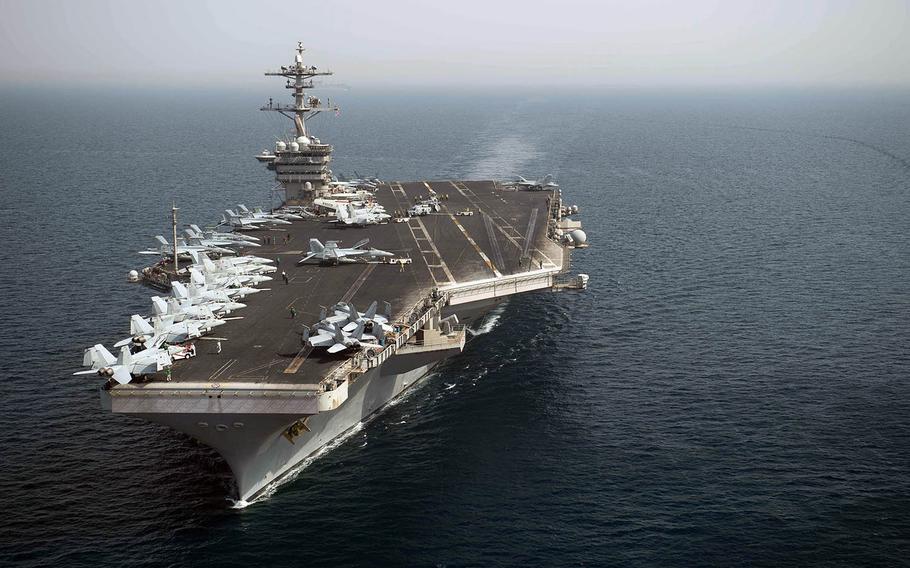 YOKOSUKA NAVAL BASE, Japan — The USS Theodore Roosevelt aircraft carrier is back in the Pacific after four months in the Arabian Gulf launching strikes against the Islamic State and the Taliban.

The carrier and its support ships have rejoined the Yokosuka, Japan-based 7th Fleet on a temporary basis to conduct maritime security operations and build relationships with partner navies and allies, the Navy said in a statement this week.

On its way to Bahrain, home of the 5th Fleet, the ships drilled for four days alongside two other carriers — the USS Ronald Reagan and USS Nimitz — near the Korean Peninsula.

In December, aircraft from the Theodore Roosevelt launched dozens of sorties from the Arabian Gulf against the Islamic State in the Middle East and the Taliban in Afghanistan.

“It is unusual for an air wing to fly sorties on the same day in support of two different operations in different geographical locations,” Capt. Chris Ford, commander of Carrier Air Wing 17, said in a statement. “The squadrons and air crew are able to do this dynamic combat support because they have maintained a high level of readiness, both in training and maintenance.”

The Theodore Roosevelt is one of two 3rd Fleet carriers operating in the Western Pacific. The USS Carl Vison has been patrolling here since deploying from San Diego in January under the Third Fleet Forward initiative, which allows ships to remain in the 3rd Fleet chain of command while operating in 7th Fleet waters. It made a port call in Vietnam earlier this month, a first for a U.S. carrier since the Vietnam War.

The two carriers are filling in for the Yokosuka-based Ronald Reagan, the Navy’s only forward-deployed aircraft carrier, which is undergoing maintenance.