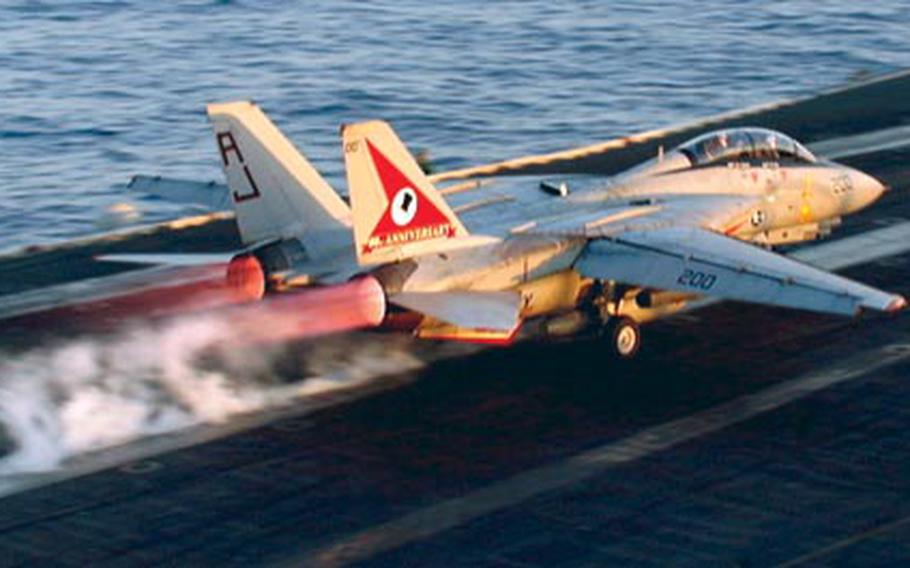 An F-14 Tomcat screams off the aircraft carrier USS Theodore Roosevelt during flight operations on May 15, 1999. Fighters from the Roosevelt were attacking military sites inside Kosovo. (S&S file photo)

As the U.S. military poised itself to lead the NATO-bombing campaign against Yugoslav President Slobodan Milosevic, the Navy&#8217;s 6th Fleet positioned a fleet of warships in the Adriatic Sea &#8212; augmenting the aerial firepower of the U.S. Air Force and participating NATO allies.

"By being stationed off the coast of Albania, TR&#8217;s attack aircraft had much quicker turnaround times, could remain on station longer, and could respond quicker to targets of opportunity than the land-based NATO air forces operating from Italy," Winkler said.

The Navy, in essence, took a backseat to the Air Force, but provided critical support, according to then-6th Fleet commander Vice Adm. Daniel J. Murphy Jr.

"I view the role of the 6th Fleet, the Navy and the Float Marine Forces assigned to me as being that of a junior partner to [Gen. John] Jumper and his Air Forces," Murphy said in a statement to congressional leaders at the time.

The TR battle group, which included ships such as the amphibious assault ship USS Saipan, guided-missile cruiser USS Anzio and guided-missile destroyer USS Mitscher among a few, stepped in to respond to NATO&#8217;s message to Milosevic "that we were dead serious this time," Murphy said.

"During two months of strikes in support of Allied Force and Noble Anvil operations, [Carrier Airwing-8] aircraft expended more than 800 tons of ordnance against the Serbs," Winkler said.

"While the Navy cannot claim that it won the war, it certainly contributed to an outcome that led to NATO occupation of Kosovo and the return of over a half-million refugees."

The operation&#8217;s commitment of military assets left other areas of the world vulnerable from U.S. protection, wrote Heritage Foundation experts James Phillips and James H. Anderson in a July 1999 review titled "Lessons from the War in Kosovo."

"The military intervention in Kosovo reduced the capacity of the United States to respond to other, more important security commitments around the globe, such as those in the Middle East and on the Korean Peninsula," an excerpt of the document reads.

"The United States is fortunate indeed that rogue states like North Korea and Iraq did not exploit the diversion of U.S. military assets to the Balkans."