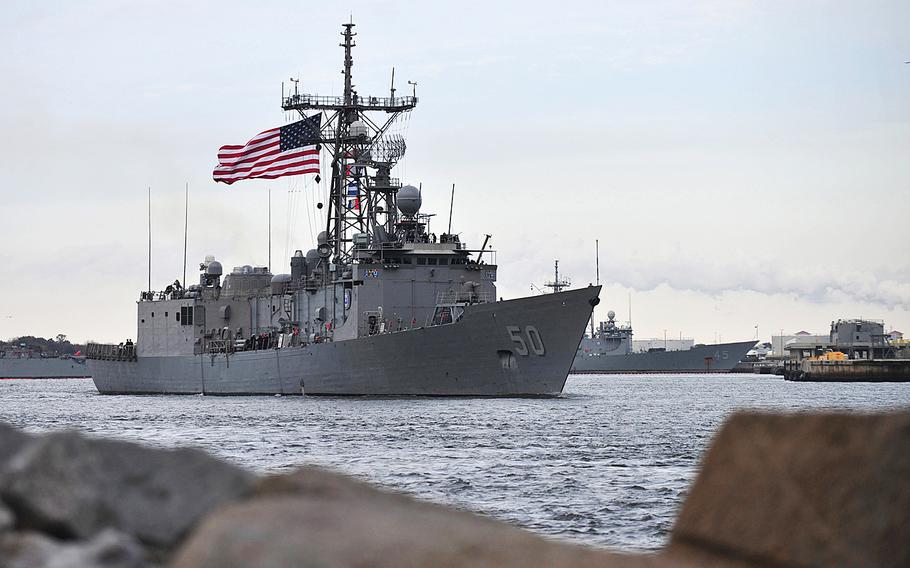 NAPLES, Italy — A Navy frigate moored in Turkey since running aground in the Black Sea last month is being towed to Crete for repairs.

The USS Taylor will have its propeller hub and blades replaced at the Navy base in Souda Bay, a process expected to take several weeks, a spokesman for U.S. Naval Forces Europe-Africa said. The ship will then finish its deployment in European and Middle East waters.

A contracted tug boat began moving the ship on Friday.

The Taylor ran aground while attempting to moor in Samsun, Turkey, on Feb. 12, and has remained pier-side for damage inspection since the incident. No one was injured during the grounding.

Cmdr. Dennis Volpe, the ship’s commanding officer, was relieved of duty after an initial inquiry into the incident, with another officer taking interim command.

The guided-missile frigate entered the Black Sea on Feb. 4 with the amphibious command ship Mount Whitney. The Navy called the visit routine, although it was timed around the Sochi Olympic Games and was announced by the Pentagon in January, after terrorist groups threatened to disrupt the events at the Russian Black Sea resort.

As the Taylor departed Samsun on Friday, another Navy warship entered the Black Sea. The guided-missile destroyer USS Truxtun passed the Bosporus Strait on the way to engagements with Bulgarian and Romanian navies, according to a photo tweeted by Agence France-Presse.

The Truxtun, part of the George H.W. Bush Carrier Strike Group, enters the Black Sea at a time of heightened tensions on Ukraine’s Crimean Peninsula, where Russian troops have taken over key military installations. The Navy has called the Truxtun visit routine and unrelated to the crisis.