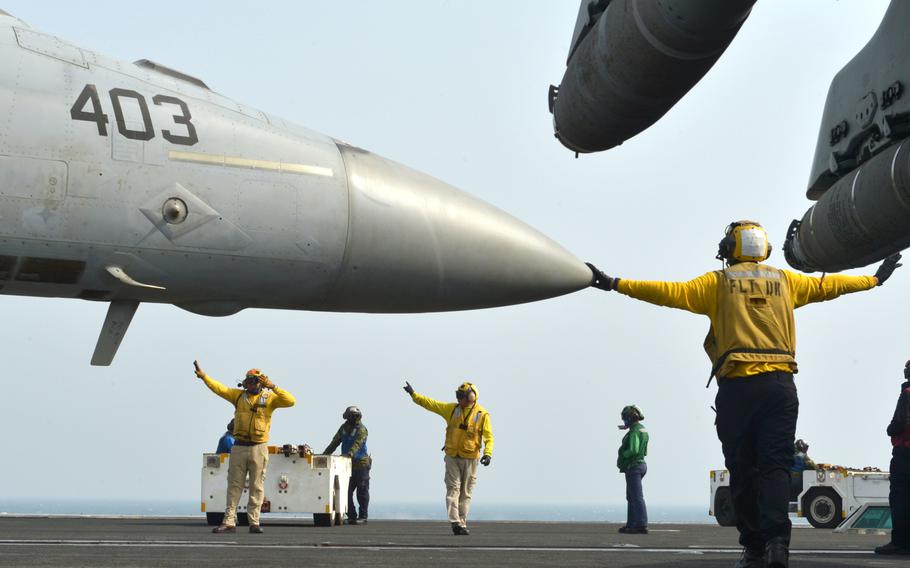 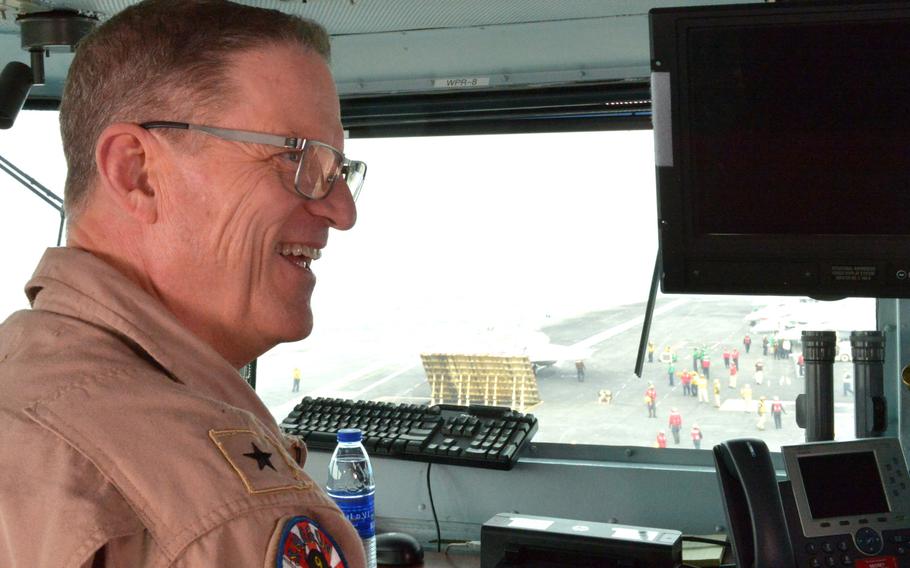 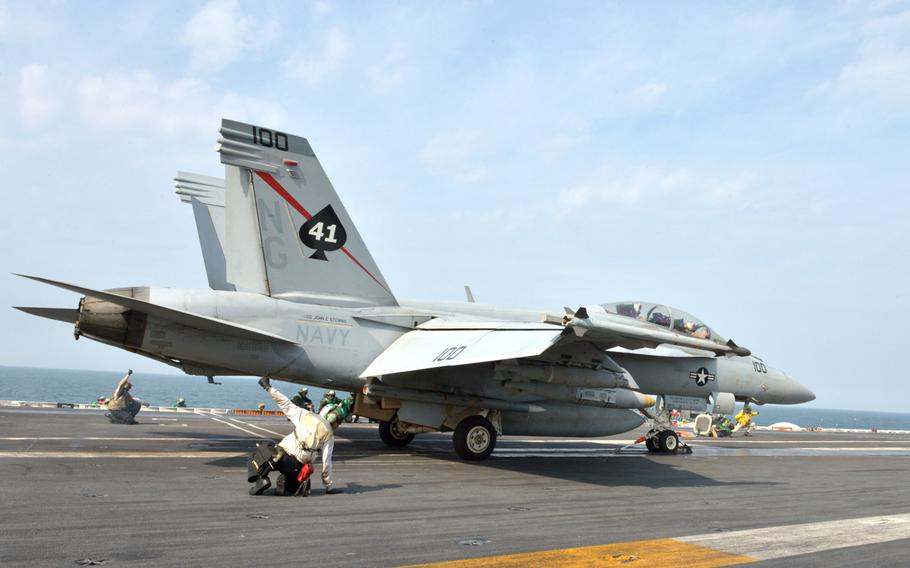 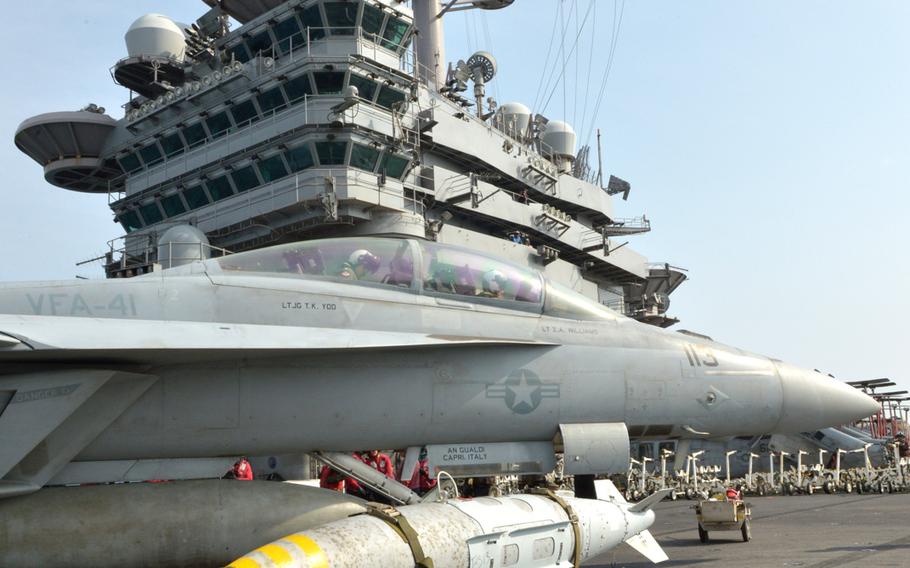 Buy Photo
Ordnance awaits to be attached to aircraft on the flight deck of the USS John C. Stennis on Jan. 8, 2019. (Joshua Karsten/Stars and Stripes) 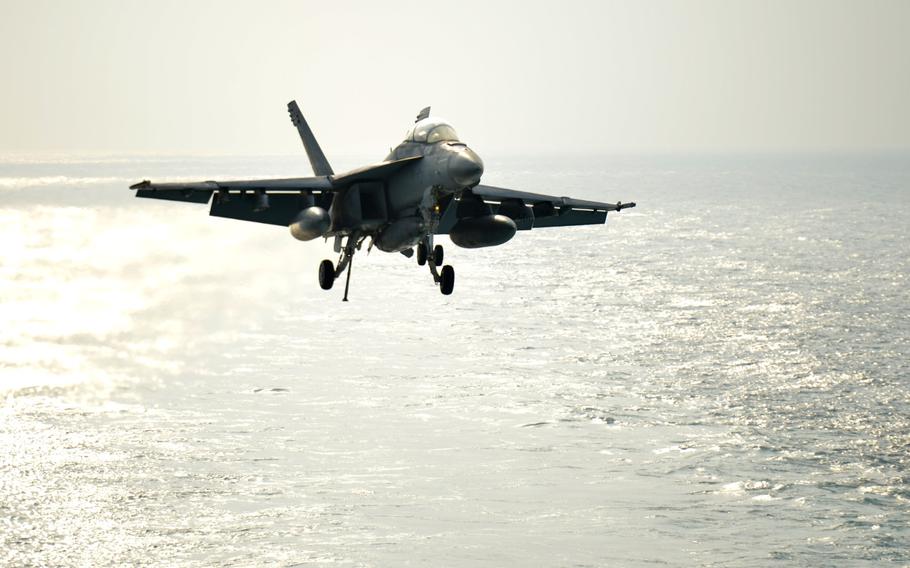 Buy Photo
An FA-18 Hornet prepares to land on the flight deck of the USS John C. Stennis on Jan. 8, 2019. (Joshua Karsten/Stars and Stripes) 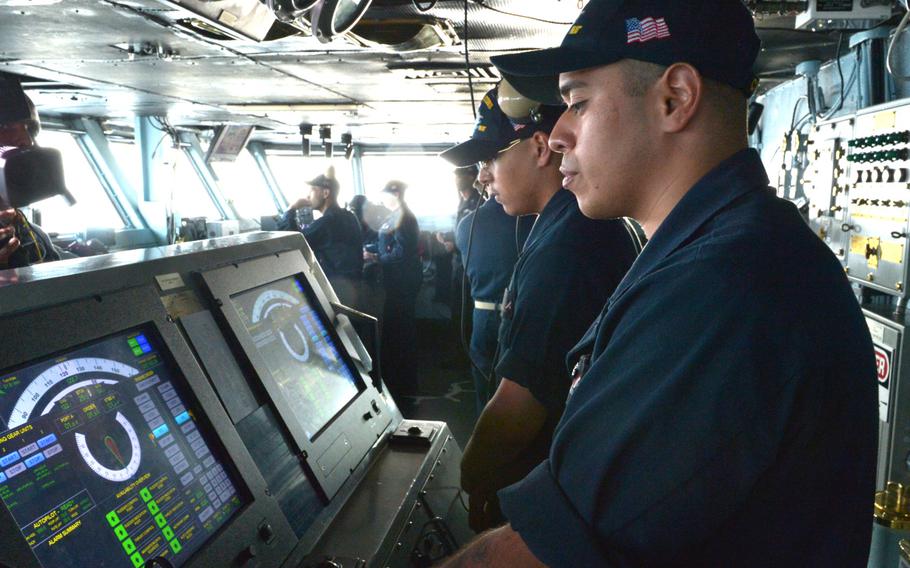 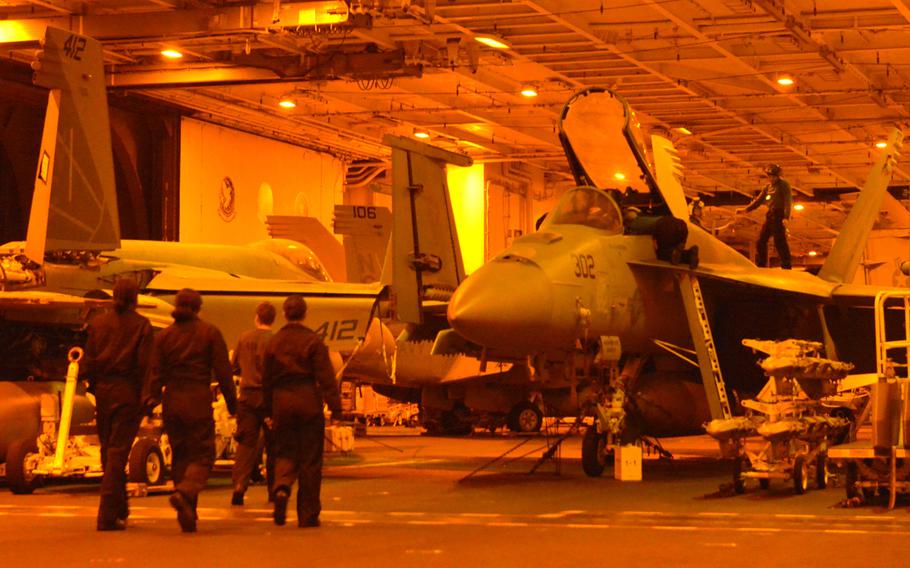 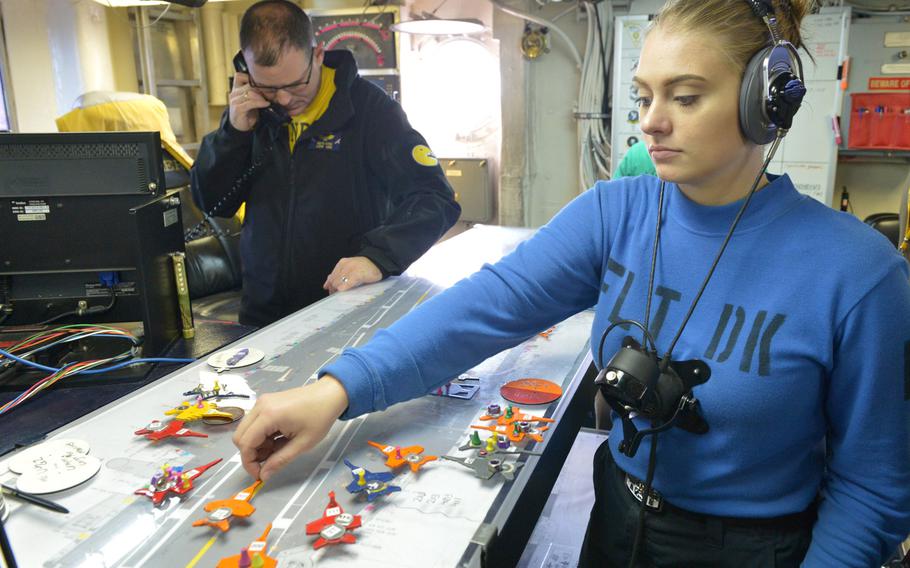 Buy Photo
A flight deck control sailor moves pieces around a board that mirrors real-time aircraft movement on the flight deck of the USS John C. Stennis on Jan. 9, 2019. (Joshua Karsten/Stars and Stripes) 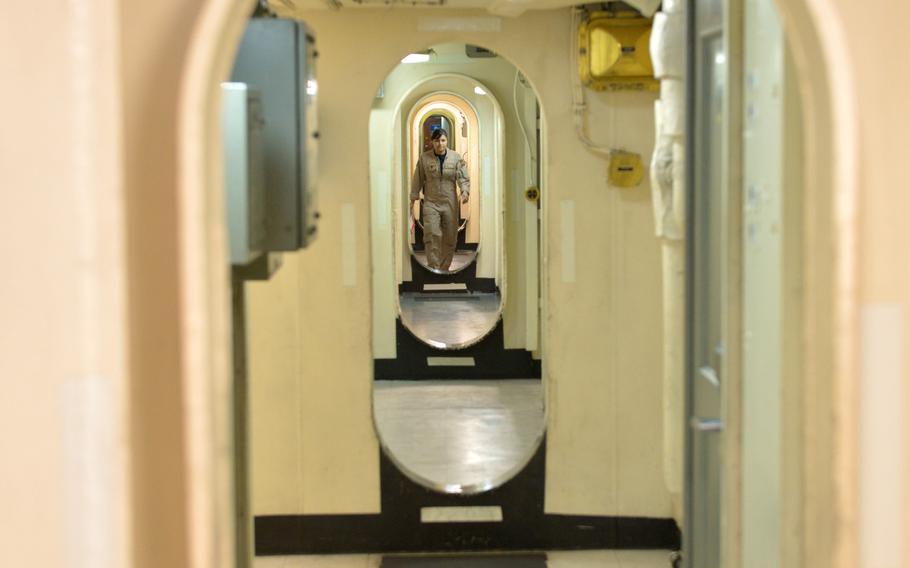 Buy Photo
A pilot transits the narrow passageways on board the USS John C. Stennis on Jan. 8, 2019. (Joshua Karsten/Stars and Stripes) 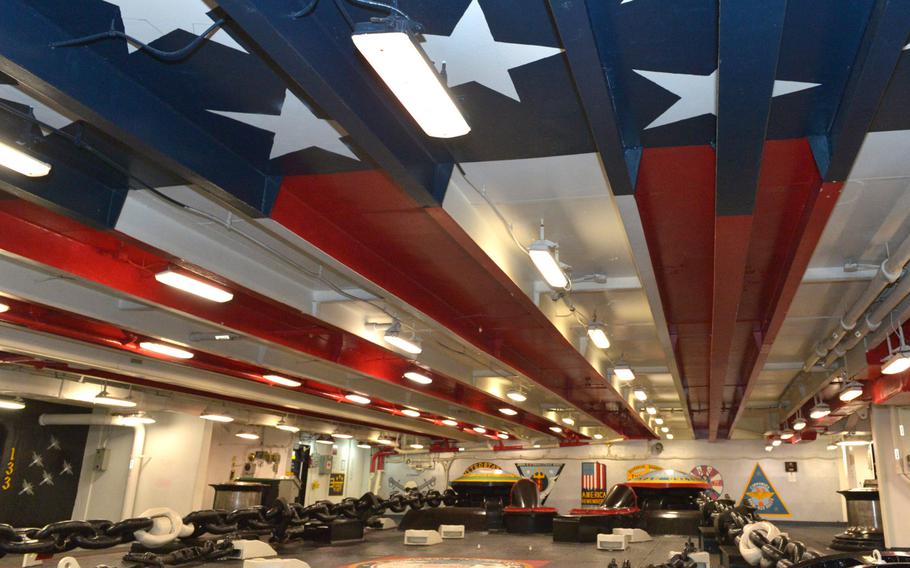 Buy Photo
An American flag painting covers the overhead of the forecastle on board the USS John C. Stennis in the Persian Gulf, Jan. 8, 2019. (Joshua Karsten/Stars and Stripes)

ABOARD USS JOHN C. STENNIS — U.S. warplanes thundered off the runway as the USS John C. Stennis maneuvered through the Persian Gulf during an intense 24 hours that sent scores of bomb-carrying fighters into Iraq and Syria, where American air power remains on display despite talk of a troop drawdown.

For now, the mission in the region hasn’t changed, carrier group commander Rear Adm. Mike Wettlaufer told Stars and Stripes on Tuesday aboard the Stennis.

“We are given missions to do and we fulfill those missions whether it’s delivering ordnance where the ground commander may need it or providing overwatch for folks on the ground,” Wettlaufer said. “Our presence is part of the overall joint coalition force presence here.”

The presence is a signal of the U.S. commitment to ongoing operations in the Middle East, sailors said, and even some deploying for the first time said they are ready for whatever may come.

The USS Stennis arrived in the Persian Gulf last month — the first carrier visit to the region since April — at a time of heightened tensions.

Iran has threatened to close the strategic Strait of Hormuz, where much of the world’s oil transits. The Yemeni civil war is ongoing and key U.S. allies Saudi Arabia and Qatar remain at odds.

Meanwhile, President Donald Trump’s decision last month to pull U.S. troops out of Syria has created confusion over what could come next in the battle against Islamic State fighters in Syria. But in recent days, the Trump administration has sent mixed messages about its withdrawal plans. National security adviser John Bolton indicated earlier this week that a pullout could take months.

For the sailors aboard Stennis, the direction of Syria policy in Washington has little bearing on the day-to-day mission in the Gulf. On Tuesday, about 70 fighter jets launched and returned from flights, many in support of ground forces in Syria and Iraq.

Any carrier mission in the Persian Gulf means a nearby Iranian presence. The Stennis transited the Strait of Hormuz last month shadowed by Iranian warships. Local Navy officials said that while they have recorded some interactions with Iran that they deemed unprofessional recently, none were considered unsafe.

Stennis skipper Capt. Randy Peck joked that Iran was “escorting us through the Strait” in response to the interaction.

“It doesn’t deter us from being able to do our job to gain access and entry into the Gulf,” he said. “It’s an international strait, we’re exercising our right to be there and despite the show of force, it didn’t deter us from our ability to do that.”

Thompson said that all the roles on board – ranging from logistics to repair, food preparation to administration – are “behind that one possible pilot to get him or her airborne and to get their ordnance heading up toward Syria.”

Driving the ship, Seaman Jose Antiveros, a 26-year old helmsman on his first deployment, joked that while he does have a valid driver’s license, he is also trained to steer an aircraft carrier.

“It’s a pretty important job,” Antiveros said. “There’s 11 nuclear-powered carriers in the world and I am one of those people driving the ship right now, so I think that’s pretty good.”

The ship’s workups helped prepare first-time deployers like Petty Officer 3rd Class Javen Rogers, a navigation specialist, for the long mission at sea. She said she’s ready for any type of emergency.

“Everything we did on the underway (training) prepared me for the deployment, so nothing is unexpected.”