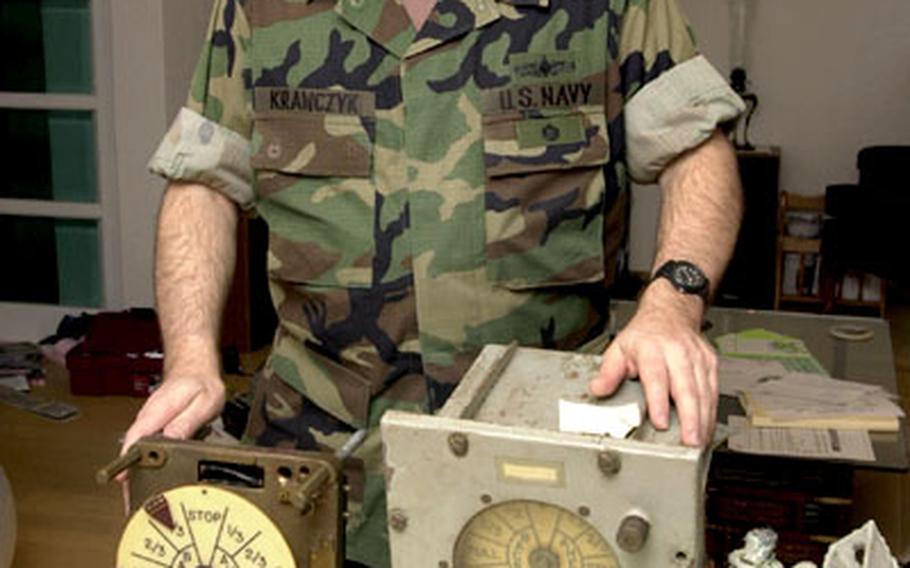 U.S. Navy Capt. S. Greg Krawczyk, displays some of the parts which will find their way to the U.S. in the effort to restore the USS Slater. (Greg L. Davis / S&S)

The aluminum, steel and brass parts look like junk. But to Kraw- czyk, the steel is better than gold &#8212; pieces of the past that will eventually teach history to those too young to remember World War II.

The smaller parts are sent by mail to Albany, N.Y., by Kraw- czyk. There, dozens of volunteers have restored 90 percent of the USS Slater, a World War II-era destroyer escort. Krawczyk, Navy reserve liaison officer at CNFK, gave tours of the Slater while stationed at the Naval and Marine Corps Reserve Center there.

Last year, he was driving near Chinhae Naval Base when he spotted a deteriorating prize. It was a World War II-era destroyer escort of the same kind as the Slater, full of a huge score of hard-to-find parts, he said.

The USS Cavellero, renamed Kyung Nam, for its service in the South Korean navy, was being used for target practice, Kraw- czyk said. It had taken one torpedo and two anti-ship missiles, which punched damaging &#8212; but not lethal &#8212; holes in the Kyung Nam.

Since August, Krawczyk and others have removed at least 300 parts from the ship after working an arduous, six-month permission process with the South Korean Defense Ministry. In February, Krawczyk and seven U.S. sailors volunteered to spend four days taking parts off the Kyung Nam, one of five trips he has made since August.

The heavier parts are in a parking lot at Chinhae Naval Base on Korea&#8217;s southern coast, and the others are in Krawczyk&#8217;s apartment. &#8220;Luckily, I have a three-bedroom apartment,&#8221; Krawczyk said. A few hours every night, Krawczyk takes detailed digital pictures of parts and forwards them to the Slater&#8217;s restoration team.

The USS Slater is one of only six destroyers of its kind still in existence, although about 565 were built during WWII. It was a heavily armed, expendable ship built by Navy shipyards to meet the demands of a monstrous naval war, Krawczyk said.

In May 1944, the Slater was commissioned, but never saw battle. The Slater escorted convoys to England and sailed to the Philippines, Japan and the Caroline Islands, but it was placed out of commission by the Navy just three years after being launched.

In 1951, the ship was transferred to the Greek navy and renamed the Aetos-01.

The Slater served as an officer-training vessel until 1991, when Greece gave the ship back to the Destroyers Escort Sailors Association. Former sailors donated about $275,000 to bring the Slater back to the United States.

In 1993, a Russian tugboat brought the rusting, battered Slater from Crete to New York City. By that time, the ship had ceased running and was about to be scrapped.

Since then, volunteers have been diligently restoring the ship to its original form, a mighty, time-consuming task since the ship was modified numerous times by the Greeks.

Don Norris was a code writer on the Slater. He got on the ship in Tokyo Bay in December 1945, just a few months after the end of the war, when the bay was still littered with derelict, burned-out warships.

Norris is active in Slater reunions and also helps with restoration work.