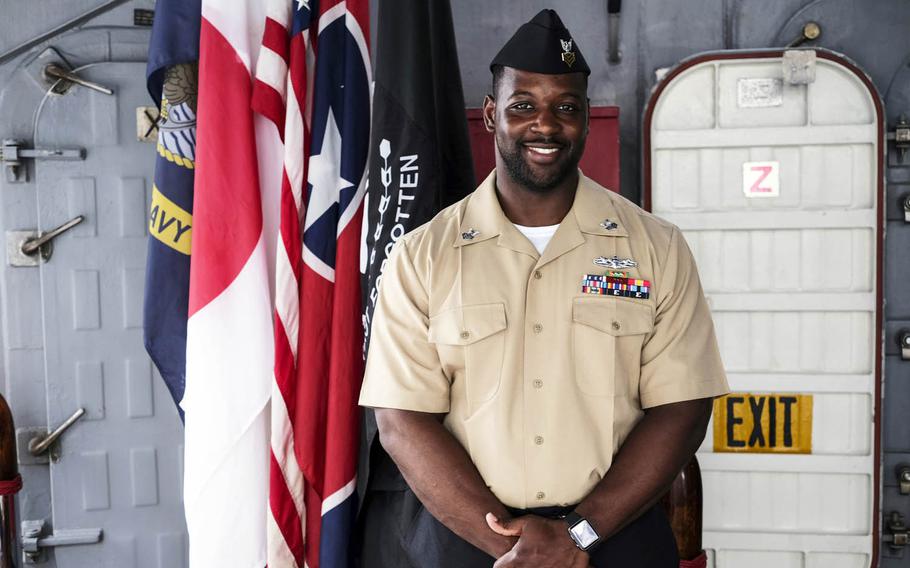 YOKOSUKA NAVAL BASE, Japan — For sailors looking for an easier way to study for advancement exams, a USS Shiloh sailor has an app for that.

Officials from the Yokosuka-based guided-missile cruiser announced last month that the Shiloh had out-performed other 7th Fleet cruisers on a recent exam, resulting in 49 sailors selected for promotion.

Officials attributed this to several factors, including a smartphone-based study aid developed by Petty Officer 1st Class Marquise Hubbard, a sonar technician aboard the ship.

Hubbard developed the free application, called the Sailors Mobile and Readily-Accessible Trainer, over a two-year period. It functions like flashcards, allowing sailors to study for and or take practice exams in preparation for their advancement exams.

The app comes pre-loaded with tests but also allows sailors to develop tests of their own. It also grades practice exams and shows sailors which questions they got wrong.

The app, which was available for IOS and Android, requires internet access to be downloaded but doesn’t need a connection to be used.

“The whole purpose is to allow [sailors] to use it both in port or underway without any Wi-Fi connection,” he said.

Hubbard, who developed the app based on his experiences taking exams and teaching advancement training to sailors, said it allows sailors to study whenever they have a free moment, and keeps them from carrying around hundreds of notecards.

“I’ve take the advancement exam a lot,” he said. “There’s times I’ve had 900 notecards, and going through 900 notecards every single day is a lot. So, having something on hand that you can just flip through and read helps a lot.”

The app’s popularity spread throughout the Shiloh by word of mouth, and Hubbard has had sailors stationed on Navy ships throughout the world contact him on social media asking about it, he said.

The app is primarily geared toward those stationed aboard cruisers, but covers some baseline knowledge that most sailors are required to know.

Sailors in Hubbard’s advancement class used the app and most of them did well on the exams, he said.

“The advancement percentage came out about how Shiloh did previously and compared to the other cruisers, and there was an increase … any increase is great even by .01 percent,” he said.

Hubbard – who said he learned the skills to make the app by reading and watching videos online and asking friends for help – said he recently pulled the app from stores because he is working on expanding it and adding more capabilities. He has plans for it to also serve as an aid for sailors while deployed and making port-call visits.

Hubbard’s vision for the app includes giving it the capabilities to pass messages about bad weather, submit or receive electronically approved liberty plans, show sailors maps of off-limits liberty areas, pass command messages to sailors while they are on liberty during port visits and allow them to carry around a contact roster electronically. He expects to begin beta testing in a few weeks.

Hubbard said the Navy is in a “digital age” and that sailors often respond better to digital learning than reading a book or a manual.

“I’ve been in [the Navy] for 12 years,” he said. “When I came in, it was books … but in this day and age, these sailors are using digital to help themselves out. I think if you talk to a sailor about how much time they spend with their phone, they would tell you all day.”