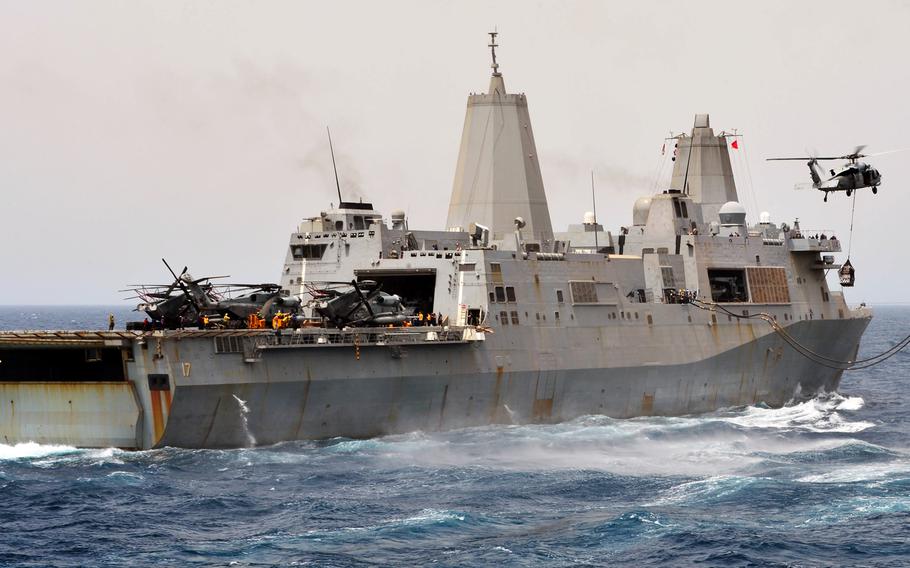 The ship is part of the Kearsarge amphibious ready group, which left the East Coast in March for a routine deployment to the Middle East and Europe. The group includes two other ships, the USS Kearsarge, an amphibious assault ship, and the USS Carter Hall, an amphibious dock landing ship. Amphibious groups are crisis-response forces capable of landing Marines, their vehicles and cargo.

The Kearsarge and Carter Hall were still in the Middle East as of Sept. 2, according to a Facebook post by Col. Matt St. Clair, commander of the 26th Marine Expeditionary Unit embarked on the San Antonio, to the unit’s official page.

St. Clair wrote that the San Antonio’s arrival in the Mediterranean was “pre-planned” and that its operations and training at the time were routine.

Five U.S. guided-missile destroyers are believed to be positioned in the eastern Mediterranean as Congress considers a military strike against the Syrian regime for its alleged use of chemical weapons against rebel-held areas near Damascus on Aug. 21.

Two U.S. aircraft carrier strike groups also remain in Middle East waters. The USS Nimitz was in the southern Red Sea as of Tuesday; the USS Harry S. Truman was in the Arabian Sea as of Monday.

Tensions remain high in the area amid posturing and movements by several nations. A joint U.S.-Israeli test of Israel’s missile defense system on Tuesday sparked concern and headlines in Russia. Meanwhile, Russia recently announced deployments of a reconnaissance ship and a missile cruiser to the eastern Mediterranean, according to media reports.

Russian media also described those movements as routine, according to the reports.