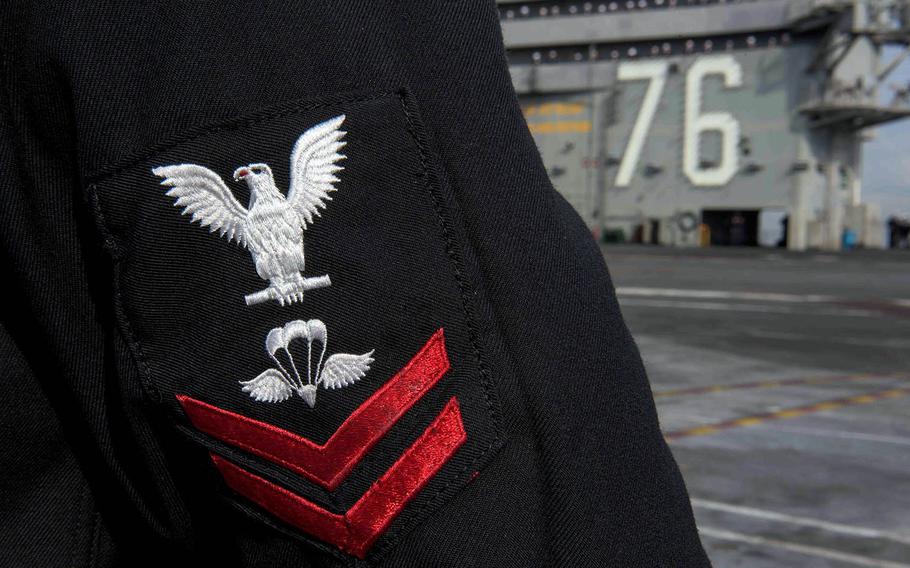 A sailor mans the rails as the USS Ronald Reagan arrives at Yokosuka Naval Base, Japan, Dec. 4, 2017. (Kenneth Abbate/U.S. Navy)

YOKOSUKA NAVAL BASE, Japan — A sailor assigned to the aircraft carrier USS Ronald Reagan was arrested Saturday by Tokyo police after being accused of sexual assault, the Navy said on Monday.

Navy officials would not identify the sailor.

“We are cooperating with Japanese authorities,” Naval Forces Japan spokeswoman Cmdr. Reann Mommsen said in a statement. “Due to the ongoing investigation and privacy concerns, it would be inappropriate for us to comment on any additional details.”

A Navy official told Stars and Stripes that the victim was not a Japanese national.

News of the arrest comes on the heels of a short-term alcohol ban placed on Ronald Reagan sailors. Capt. Michael Donnelly, the ship’s commander, implemented the restriction on Sunday morning after an uptick in alcohol-related incidents. The ban was lifted on Monday afternoon after an all-hands call aboard the ship that focused on “the importance of safe and professional conduct every day, on and off duty,” Mommsen said.

One of those incidents involved a Ronald Reagan sailor being injured over the weekend at a Yokosuka barracks. Navy officials would not provide further details, but said the incident is under investigation and that the sailor is in stable condition.

Homeported at Yokosuka, the Ronald Reagan is the Navy’s only forward-deployed aircraft carrier and has a crew of approximately 3,000 sailors.