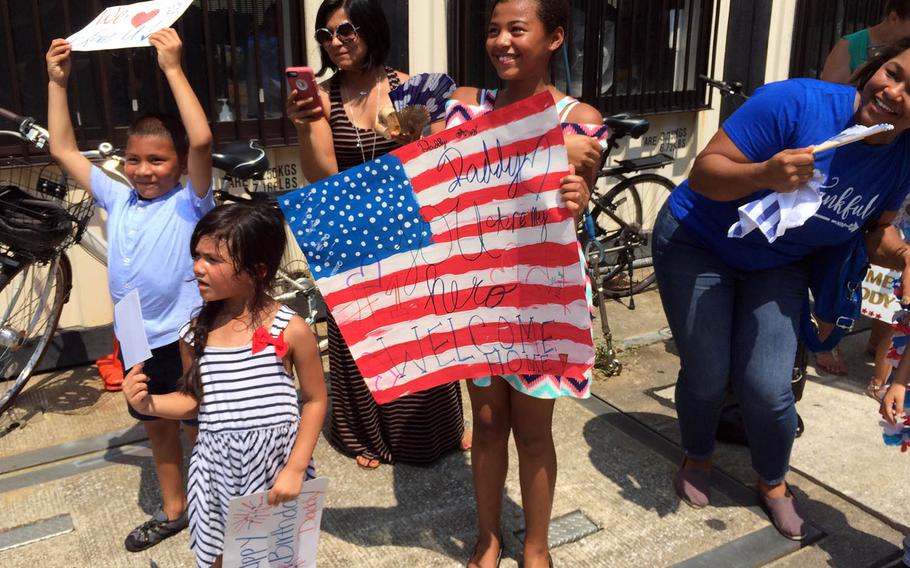 Buy Photo
The family of a USS Ronald Reagan sailor waits for his arrival at Yokosuka Naval Base, Japan, Tuesday, July 24, 2018. The aircraft carrier returned from a two-month patrol of the region. (Allen Onstott/Stars and Stripes)

Buy Photo
The family of a USS Ronald Reagan sailor waits for his arrival at Yokosuka Naval Base, Japan, Tuesday, July 24, 2018. The aircraft carrier returned from a two-month patrol of the region. (Allen Onstott/Stars and Stripes) Buy Photo
A sailor assigned to the USS Ronald Reagan greets his family after returning to Yokosuka Naval Base, Japan, Tuesday, July 24, 2018. (Allen Onstott/Stars and Stripes) Buy Photo
A USS Ronald Reagan sailor greets a loved one after returning to Yokosuka Naval Base, Japan, Tuesday, July 24, 2018. The aircraft carrier wrapped up a two-month patrol of the region. (Allen Onstott/Stars and Stripes)

YOKOSUKA NAVAL BASE, Japan — The USS Ronald Reagan aircraft carrier and its strike group returned home to Yokosuka Tuesday after a two-month patrol of the South, East and Philippine seas.

Rear Adm. Karl Thomas, who was sworn in as Task Force 70 commander last week, said though the deployment was not lengthy, all goals for the mission were accomplished.

“We like to operate when we need to and where we need to,” he said. “We don’t talk about future deployments, but the amount of time we were out allowed us to prepare and to train and to conduct exercises.”

The Ronald Reagan left its homeport on May 29 after a two-week delay to repair a “material issue” discovered during sea trials earlier that month. Thomas said the delay did not affect the overall mission.

“We were a little bit late getting underway, but we still were able to conduct all the exercises we wanted to do,” he said.

Those drills included Malabar 2018 early last month with the Indian Navy and Japan Maritime Self-Defense Force. The countries exchanged expert and professional information, and practiced surface and anti-submarine warfare, medical operations, damage control and helicopter operations over the nine-day exercise, according to the Navy.

“Our presence out there is the most important thing so that we can sustain the peace and security of the region,” Thomas said.

The Ronald Reagan’s commanding officer, Capt. Buzz Donnelly, said he was “proud of the crew,” which is excited for a “short break this summer” in Yokosuka.

As the sailors disembarked, a crowd of eager family members sat in the blistering heat awaiting the moment their loved ones would walk across the bridge from the carrier Tuesday morning.

While festivities included music, cold water, festive tents and handmade signs, the 91-degree temperature and 63-percent caused at least one person to suffer heat exhaustion while awaiting a reunion.

Rebecca Barlaan said her husband, Petty Officer 3rd Class Trenton Barlaan, was excited to find out she had won a “first kiss ticket,” meaning he would be one of the first sailors off the carrier.

“It made my whole entire day [when I won,]” she said. “I think my husband was more excited than I was.”

At 1,092 feet long, the Ronald Reagan is longer than the Eiffel Tower and more than three times the length of the Statue of Liberty. More than 5,000 sailors serve aboard the ship.

The carrier and its strike group — which includes guided-missile cruisers, destroyers and the Marine Corps Air Station Iwakuni-based Carrier Air Wing 5 — will undergo maintenance while in port. The Navy does not reveal when future deployments will take place.