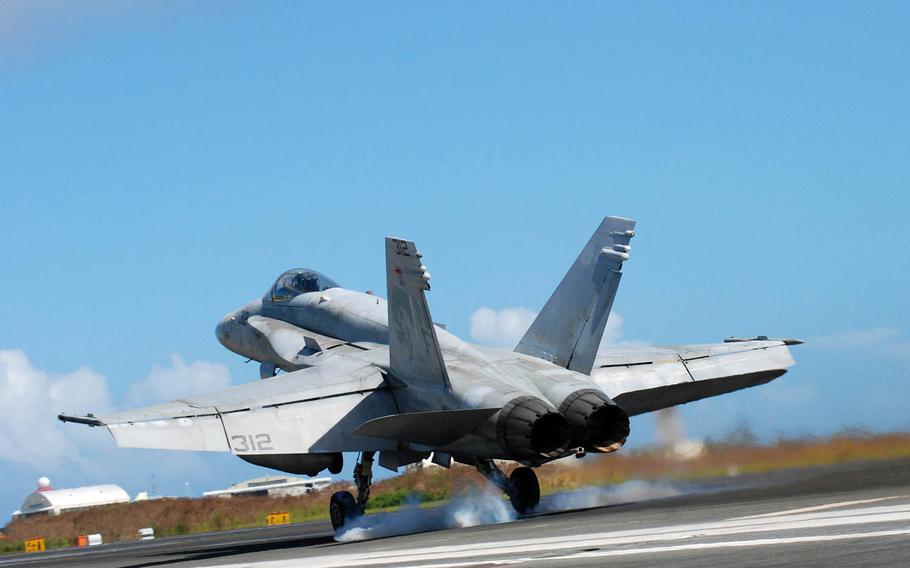 An F/A-18E Super Hornet touches down during past field carrier-landing practice on Iwo Jima, an island known in Japan as Iwo To. (Courtesy of the U.S. Navy)

An announcement, which said the training was to start back up on Saturday, came a day after the service said it had paused Carrier Air Wing 5’s practice for “operational reasons.”

The day-and-night operations — which kicked off May 3 and were slated to run through May 13 before the delay — prepare and qualify pilots to land aboard aircraft carriers ahead of their upcoming deployment aboard the carrier.

After the land-based training, the pilots were to practice landing day and night aboard the Ronald Reagan, Lt. Cmdr. Matt Knight, a Task Force 70 spokesman, told Stars and Stripes last month.

The delay was attributed in part to allowing time for the Navy’s only forward-deployed aircraft carrier to repair a “material issue” that came up during “successful” weeklong sea trials, Knight said Thursday.

“The repair will result in a delay to the scheduled departure date for USS Ronald Reagan and Carrier Strike Group 5,” he added.

Knight did not provide further details about the issue or say when the carrier and its strike group would head out on patrol.

Most of the field carrier-landing practice is still planned to happen on Iwo Jima — known in Japan as Iwo To — though inclement weather could move it to Misawa Air Base in northern Japan; Yokota Air Base in western Tokyo; Naval Air Facility Atsugi in Kanagawa prefecture; or Marine Corps Air Station Iwakuni near Hiroshima, the Navy said.