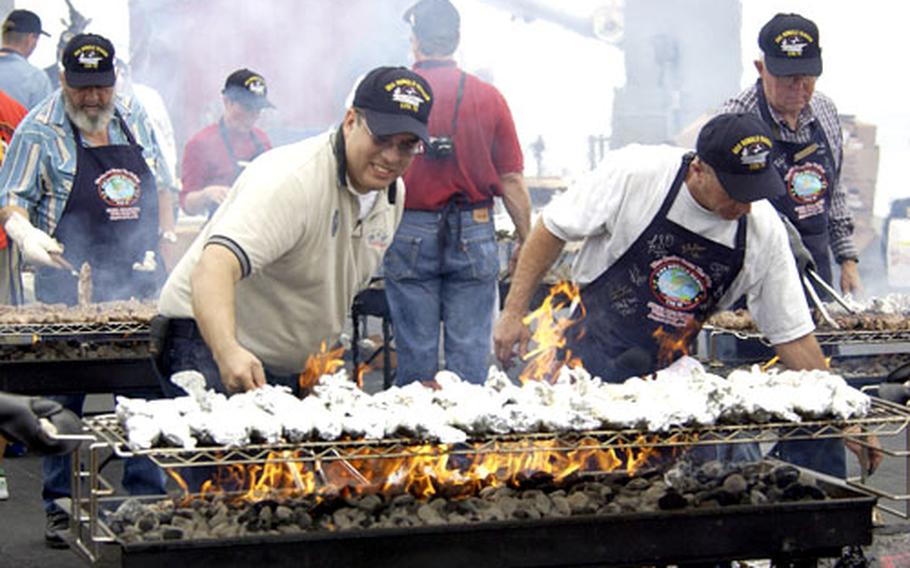 Volunteers prepare steaks for the crew aboard the USS Ronald Reagan during a “steel beach picnic” in August. The USS Reagan, which is on its maiden voyage, has all the amenities to make sailors feel right at home while on the ship. (Konstandinos Goumenidis / Courtesy of U.S. Navy)

Volunteers prepare steaks for the crew aboard the USS Ronald Reagan during a “steel beach picnic” in August. The USS Reagan, which is on its maiden voyage, has all the amenities to make sailors feel right at home while on the ship. (Konstandinos Goumenidis / Courtesy of U.S. Navy) 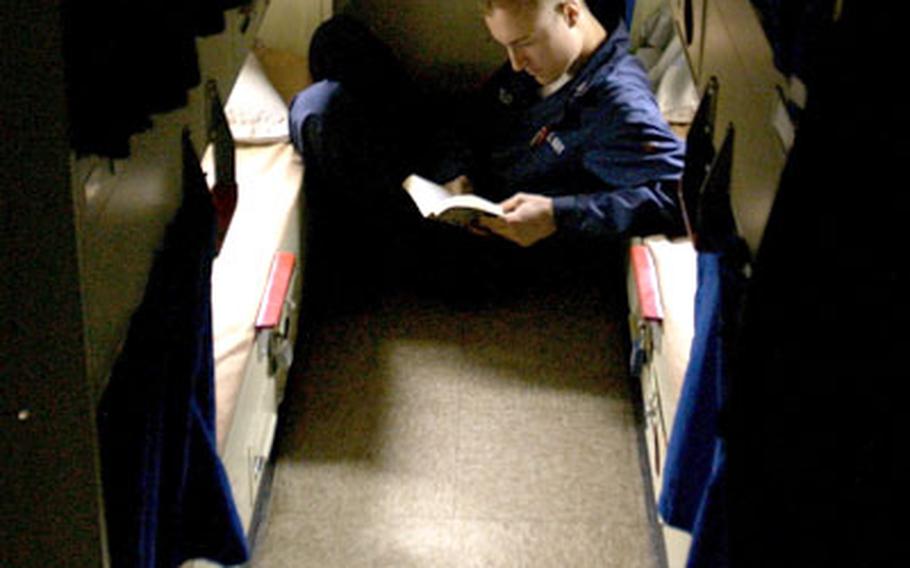 Petty Officer 3rd Class Les Sheffield, from Sweetwater Texas, reads a novel while he relaxes in between two racks after a long day of work aboard the USS Ronald Reagan, which is on its maiden voyage. (Konstandinos Goumenidis / Courtesy of U.S. Navy)

Jets from the USS Ronald Reagan officially joined the fight in Iraq on Wednesday as two F/A-18E Hornets launched from the flight deck and dropped ordnance on enemy targets, Navy officials said.

&#8220;We launched our first combat sorties two days ago and have had great results supporting the Operation Iraqi Freedom and our maritime support obligations,&#8221; the carrier&#8217;s commanding officer, Capt. Terry Kraft, said in an e-mail Friday.

The Reagan, the Navy&#8217;s newest and most advanced nuclear-powered aircraft carrier, is on its maiden operational deployment. It recently arrived in the Navy&#8217;s 5th Fleet area of operations to support the U.S. military&#8217;s ongoing missions in Iraq and Afghanistan.

&#8220;Our air wing is comprised of the most advanced aircraft in the world and is a key player in deterring aggression from the insurgency within Iraq,&#8221; Rear Adm. Michael Miller, commander of Carrier Strike Group 7, said in a statement.

In addition to having the best aircraft, the carrier has all the state-of-the art bells and whistles that make it a superior fighting machine, sailors said.

It&#8217;s those quality-of-life perks that make living on board all that much better, sailors say. Perks like the 800-ton air-conditioning plant that keeps sailors comfortable, Petty Officer 1st Class Chip Land, a hull technician, said in a phone interview Friday.

And if it weren&#8217;t for the other ships in the Reagan&#8217;s carrier strike group that need the service of the hull technicians, Land and his crew might not have too much to do during their shifts, he joked.

The Reagan has state-of-art communication and computer systems sailors use for e-mails and browsing the Web, Petty Officer 1st Class Mario Fernandez said.

&#8220;Now, we have technology to support having many people simultaneously using e-mail, searching the Web, and to top all that, conduct our mission. We&#8217;ve come a long way.&#8221;