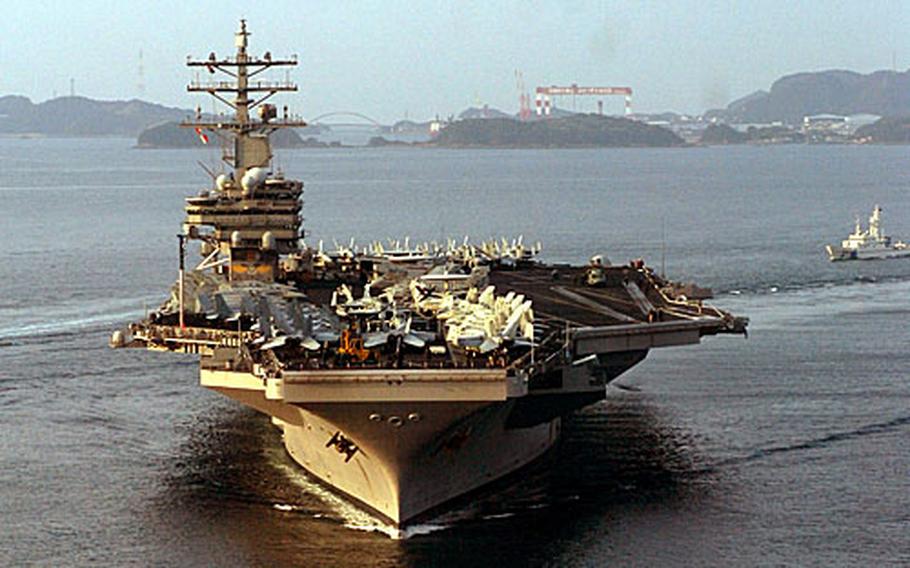 Reagan is currently in the U.S. 7th Fleet&#39;s area of responsibility as part of a surge deployment to promote peace, cooperation and stability in the region. (Courtesy of the U.S. Navy)

Reagan is currently in the U.S. 7th Fleet&#39;s area of responsibility as part of a surge deployment to promote peace, cooperation and stability in the region. (Courtesy of the U.S. Navy) 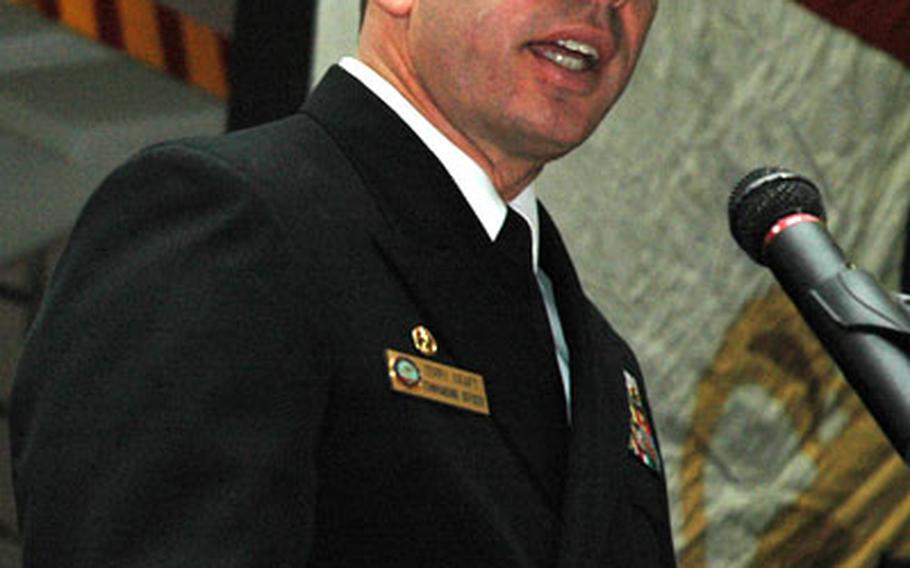 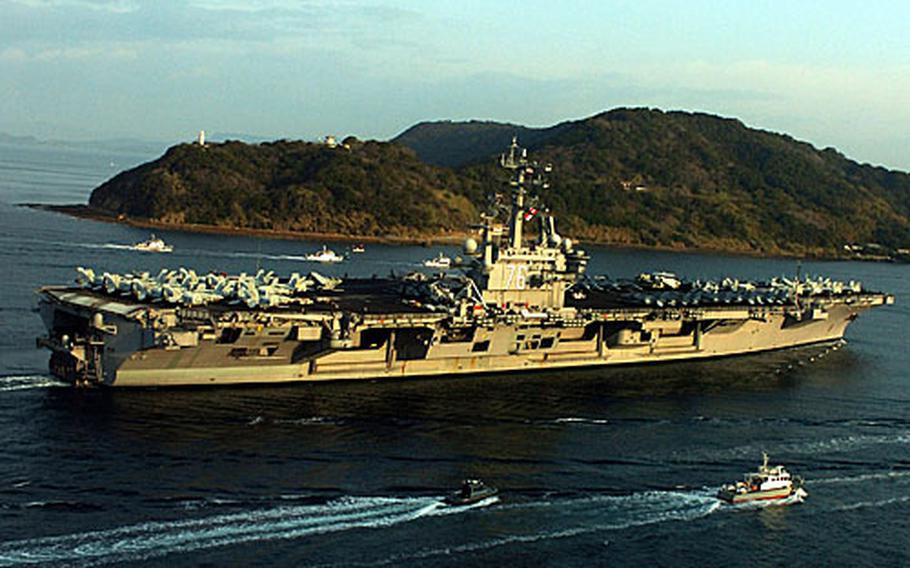 USS Reagan arrived in Sasebo, Japan on Saturday for a scheduled port visit. While in port, the ships&#39; crew will have the chance to participate in friendship-building activities, as well as cultural exchanges. (Courtesy of the U.S. Navy)

ABOARD THE USS RONALD REAGAN &#8212; The Navy&#8217;s newest nuclear-powered carrier pulled into Sasebo this weekend to train with Japanese forces, volunteer with community groups and provide its 5,000 servicemembers their first shore leave in about a month, according to Navy officials.

The USS Ronald Reagan anchored at Japan&#8217;s southwest tip rather than at the country&#8217;s larger and more central military port in Yokosuka, where the diesel-powered USS Kitty Hawk moors.

When asked whether the southern visit was a reaction to criticism from the Yokosuka community about nuclear-powered vessels, officials said the visit was a part of long-term planning while the Ronald Reagan works within the Navy&#8217;s 7th Fleet.

The Ronald Reagan is operating in Pacific waters while the Kitty Hawk undergoes routine maintenance, which is scheduled to end in the spring.

Next year, the Navy will move the nuclear-powered USS George Washington to Yokosuka, which prompted more than 37,000 local residents to sign a petition in favor of holding a public vote on the move. That referendum was denied by local politicians earlier this month.

The George Washington&#8217;s arrival will mark the first time a nuclear-powered carrier has been permanently deployed in a nation that suffered two nuclear bomb attacks during World War II.

During the news conference aboard the Ronald Reagan, Martoglio called the move a &#8220;good thing for Japan and the United States.&#8221; He and the Ronald Reagan&#8217;s commander, Capt. Terry B. Kraft, also answered questions from Japanese media about details of the carrier&#8217;s power system.

The Ronald Reagan has two nuclear reactors, though only one is needed to operate the ship, Kraft said. The reactor heats water, which is contained and then used to create steam to propel the engine, he said. No water, including that which has low levels of radiation, is dumped while the carrier is moored in foreign countries, Kraft said.

The Ronald Reagan and its strike group have about 5,000 servicemembers, including 3,000 sailors and 2,000 airmen. The short port visit to Sasebo was its first since leaving its home of San Diego about a month ago.

Kraft said more than 2,000 servicemembers had signed up for tours of Sasebo and surrounding cities, twice as many as usual when a carrier visits the area. Sasebo is on Kyushu, the same island as Nagasaki, the second city to be hit with a nuclear bomb in World War II. About 150 servicemembers also signed up to help with community projects in Sasebo, Kraft said.