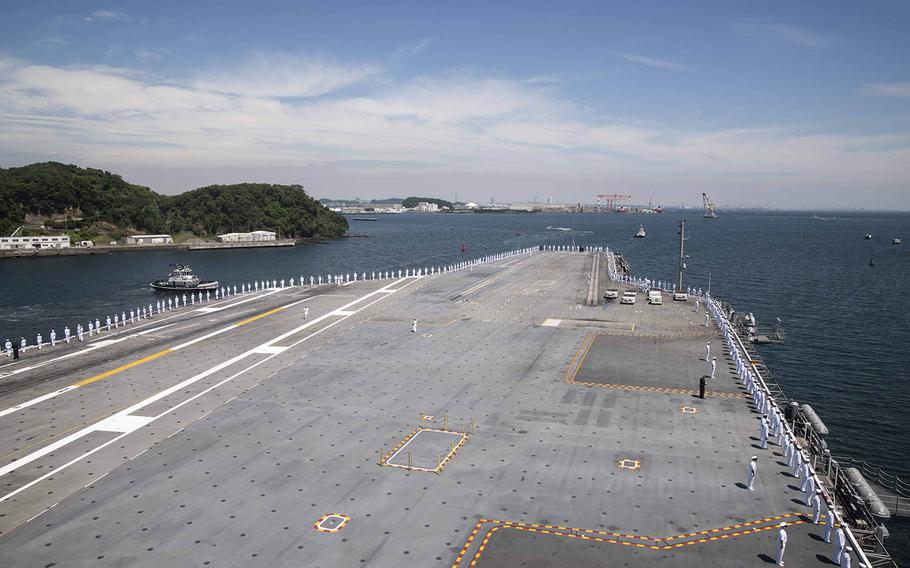 Sailors man the rails on the flight deck of the USS Ronald Reagan as the aircraft carrier departs Yokosuka Naval Base, Japan, Wednesday, May 22, 2019. (Nick Tarleton/U.S. Navy)

Sailors man the rails on the flight deck of the USS Ronald Reagan as the aircraft carrier departs Yokosuka Naval Base, Japan, Wednesday, May 22, 2019. (Nick Tarleton/U.S. Navy) 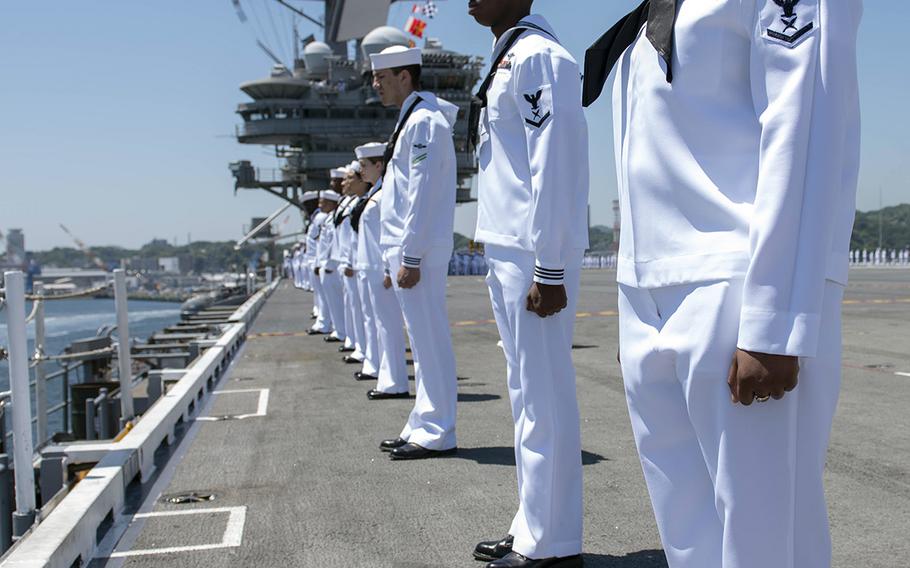 Sailors man the rails on the flight deck of the USS Ronald Reagan as the aircraft carrier departs Yokosuka Naval Base, Japan, Wednesday, May 22, 2019. (Tyra Campbell /U.S. Navy) 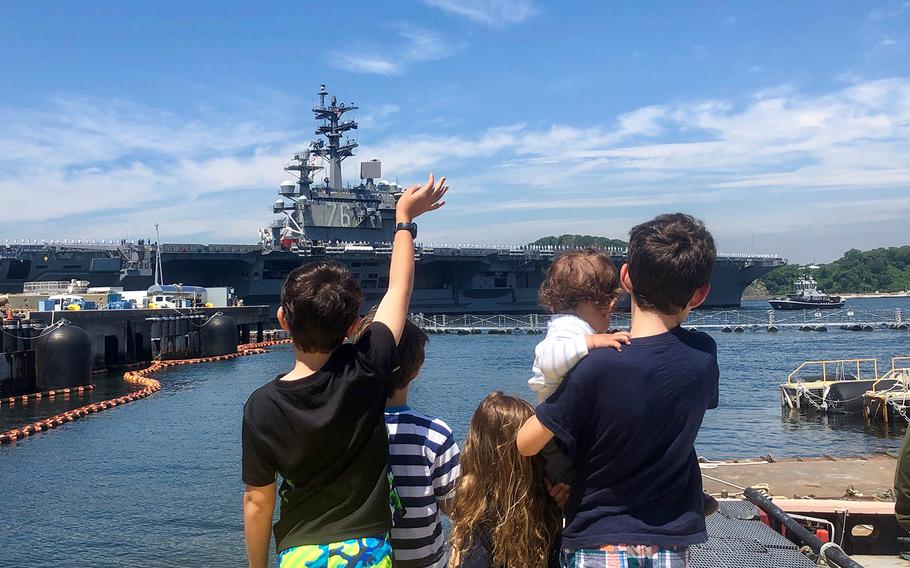 YOKOSUKA NAVAL BASE, Japan — Sailors’ families gathered on the pier Wednesday morning as the USS Ronald Reagan left its homeport to patrol the Indo-Pacific region, its first deployment of 2019.

Sailors in their dress whites lined the flight deck of the aircraft carrier as it sailed from Yokosuka. Loved ones looked on and waved, some with tears in their eyes.

The Ronald Reagan is the nation’s only carrier permanently deployed outside the United States, allowing the Navy to respond in the Indo-Pacific in a matter of days with a ship that would takes weeks to arrive from the U.S., according to a statement Wednesday from the Navy.

The carrier’s air wing — based at Marine Corps Air Station Iwakuni in southwestern Japan — is expected to join the Ronald Reagan at sea. Typically, the ship deploys with a strike group of destroyers, cruisers and an unannounced submarine presence.

The Ronald Reagan starts its latest patrol as other ships of the 7th Fleet have stepped up the frequency of freedom-of-navigation operations and exercises with allies like the Philippines and Japan in contested areas of the East and South China seas and in the Taiwan Strait.

In the past 1 ½ weeks, for example, a U.S. Coast Guard cutter and a U.S. guided-missile destroyer on separate missions both sailed near Scarborough Shoal, a relatively small feature west of the Philippines controlled by China but claimed by both countries and Taiwan.

The Navy does not typically respond to queries about the length of a carrier deployment or its destination, including port calls. Navy officials did not respond to requests for information Wednesday.

“Forward presence truly matters. For more than seventy years, our forces have been present and ready to respond immediately on behalf of our friends and allies,” Task Force 70 commander Rear Adm. Karl Thomas said in the statement. Thomas, who took his post July 18 aboard the Ronald Reagan, has tactical control of carrier strike groups, cruisers and destroyers in the 7th Fleet area of operations, according to the Navy.

Throughout the year, the task force, which includes the Ronald Reagan typically takes part in deployments and training exercises with other naval units, including those of U.S. partners, according to the Navy.

“The continued presence of Ronald Reagan and all our forward-deployed forces in the Indo-Pacific region, at sea where it matters most, promotes security and stability which in turn drives peace and prosperity to benefit all regional countries,” Thomas said in the statement.

In a press call last week, Chief of Naval Operations Adm. John Richardson declined to say whether an aircraft carrier would visit Vietnam this year. Reuters in April quoted Randall Schriver, the assistant secretary of defense for the Indo-Pacific region, as saying the U.S. hoped to arrange such a visit.

In March 2018, the USS Carl Vinson made history when it pulled into Danang, the first U.S. carrier to visit the country since the end of the Vietnam War in 1975.

Last summer, the Ronald Reagan spent five days in Manila during a break from training with Philippine forces.

Since December, when it returned from its second patrol of 2018, the carrier had been undergoing maintenance and upgrades at Yokosuka. It spent a combined six months at sea last year.

“Reagan Sailors worked hard to complete the most successful maintenance period the ship has ever seen,” Capt. Pat Hannifin, the ship’s commander, said in the statement. Hannifin took command at sea on Sept. 10.

“Reagan returns to the sea more lethal than ever, visibly renewing U.S. commitment to international norms in a free and open Indo-Pacific,” he said. “We value our allies and partners in the region and are excited to support them again with our air wing and strike group from the sea.”