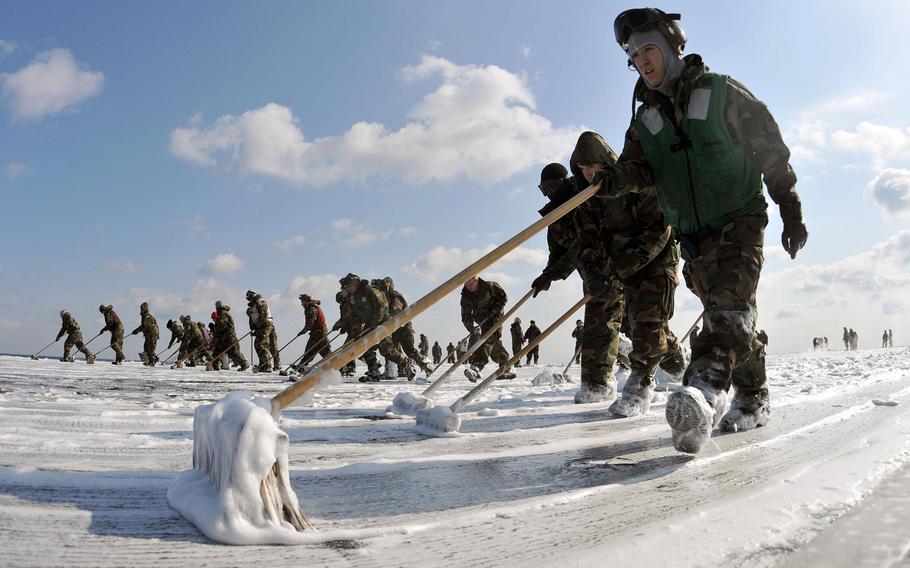 U.S. servicemembers aboard the USS Reagan scrub the external surfaces on the flight deck and island superstructure of the aircraft carrier to remove potential radiation contamination on March 23, 2011, while at sea off the coast of Japan where the ship was operating to provide humanitarian assistance in support of Operation Tomodachi. (Nicholas A. Groesch/U.S. Navy)

U.S. servicemembers aboard the USS Reagan scrub the external surfaces on the flight deck and island superstructure of the aircraft carrier to remove potential radiation contamination on March 23, 2011, while at sea off the coast of Japan where the ship was operating to provide humanitarian assistance in support of Operation Tomodachi. (Nicholas A. Groesch/U.S. Navy) 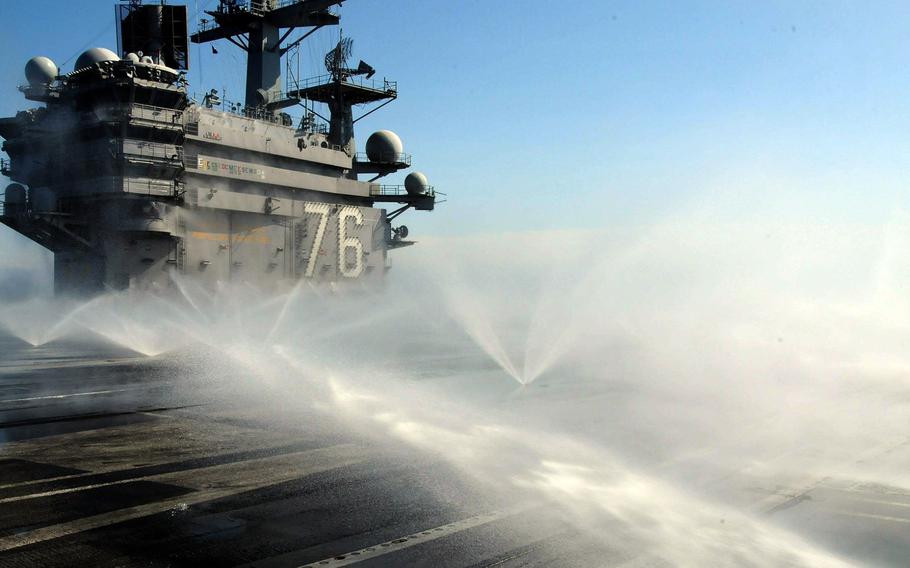 The USS Ronald Reagan conducts a countermeasure wash down to decontaminate the flight deck on March 23, 2011, while at sea off the coast of Japan where the aircraft carrier was operating to providing humanitarian assistance in support of Operation Tomodachi. (Kyle Carlstrom/U.S. Navy)

CAMP FOSTER, Okinawa — A high-ranking Defense Department official backs the contention that USS Ronald Reagan sailors were not exposed to dangerous levels of radiation in the aftermath of Japan’s nuclear disaster three years ago.

In a report recently issued to Congress in response to a January directive from defense committees, Assistant Secretary of Defense for Health Affairs Dr. Jonathan Woodson defended the military’s response and said that safeguards, put in place to protect servicemembers, worked. He said any illnesses that sailors have developed are not a result of the Operation Tomodachi relief campaign.

Woodson’s findings were generally in line with previous Navy and Defense Department statements regarding radiation exposure, yet divulged more detail than previously released, including information on potential potable water contamination and ailments.

“There is no objective evidence that the sailors … experienced radiation exposures that would result in an increase in the expected number of radiogenic diseases over time,” Woodson wrote. “The estimated radiation doses for all individuals in the Operation Tomodachi registry, including sailors on the USS Ronald Reagan, were very small and well below levels associated with adverse medical conditions.”

The report was issued as 111 sailors, Marines and airmen prepare for oral arguments in federal court Aug. 19 in their lawsuit against Japanese utility TEPCO. Lawyers for the plaintiffs said a California judge will likely make a ruling on TEPCO’s motions to dismiss the case and change the venue.

That suit was initiated in 2012 by a small group of Reagan sailors, who alleged that TEPCO’s misinformation coaxed U.S. forces closer to the affected areas and made them sick. More ailing servicemembers came forward citing exposure-related ailments such as unexplained cancers, excessive bleeding and thyroid issues and an amended suit was filed in February.

The Reagan was dispatched to help out after a massive earthquake on March 11, 2011, spawned a tsunami that heavily damaged the Fukushima nuclear power plant on Japan’s east coast.

In the report, Woodson said there are several broad categories of diseases, complications and symptoms with “slightly” elevated incidence among the Reagan sailors, compared with a control population deployed during the two preceding years. None were caused by radiation, he said.

Woodson said the rate of cancer in Reagan sailors was actually nearly 50 percent lower than in the control population. There were three cases he identified that could potentially be caused by radiation: two cases of thyroid cancer and one of nonchronic lymphocytic leukemia.

“These numbers of cases are not unusual or unexpected among a population of nearly 5,000 individuals,” he wrote, adding that the symptoms developed too soon to be caused by exposure.

“The dates of diagnosis for these three cases strongly suggest that these disease processes were initiated well before OT (Operation Tomodachi) and therefore, are not causally related to low-level radiation exposures during OT.”

Lawyers for the plaintiffs said the numbers don’t match up with the number of sick sailors involved in the suit. They claim that the report relied on incomplete and inaccurate information and that their clients were never consulted for the Tomodachi Registry, which served as the basis for many of its conclusions. They also disputed the findings regarding the ship’s positioning, radiation levels, contamination of potable water and the distribution of potassium iodide tablets.

“It is sincerely hoped that those who received this report will look beyond the scant information and ask some serious questions that haven’t been answered,” said attorney for the plaintiffs Paul Garner.

Referring to photographs shown to Stars and Stripes, lawyers claimed they could prove the ship was closer to the plant than the 100-mile exclusion zone that has been reported. They also said they had testimony of sailors charged with decontaminating the ship after the mission.

An academic report has claimed that the Reagan was met by radiation levels that far exceeded what Navy leadership had been told to expect by the Japanese government when they arrived off the coast on March 13.

Navy and Defense officials did not respond to requests seeking comment.