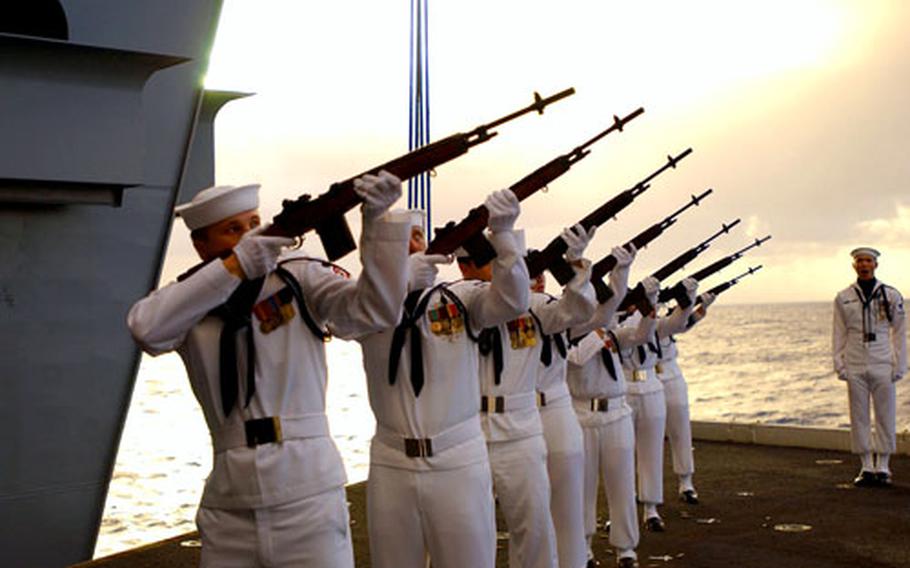 Members of the honor guard’s rifle team fire off a salute to 12 veterans during a burial at sea ceremony held aboard the USS Ronald Reagan. (Christine Singh / U.S. Navy)

Members of the honor guard’s rifle team fire off a salute to 12 veterans during a burial at sea ceremony held aboard the USS Ronald Reagan. (Christine Singh / U.S. Navy) 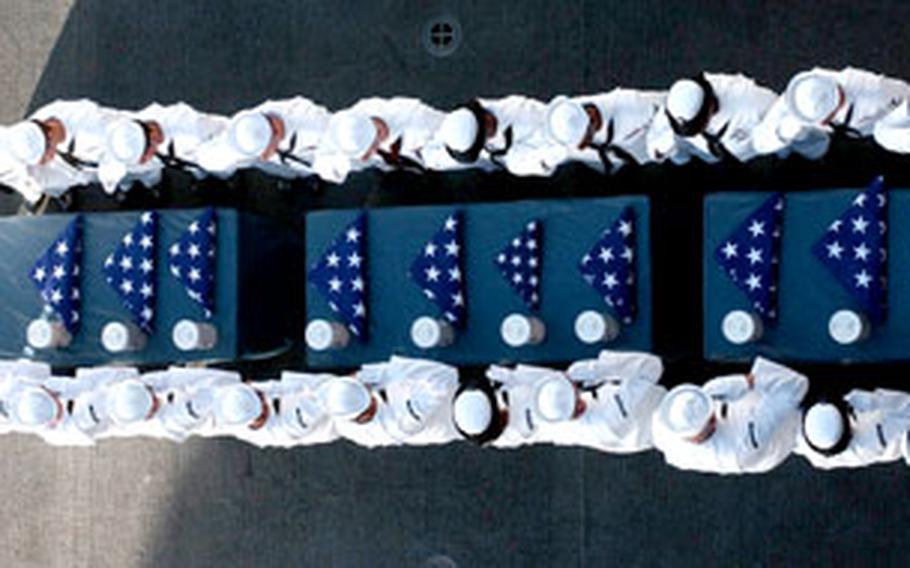 Members of USS Ronald Reagan’s honor guard salute the ashes of 12 veterans during a burial at sea. The ceremony, which also commemorated the Battle of the Coral Sea, took place near where the USS Lexington was sunk during the battle. (Lawrence J. Davis / U.S Navy)

Sailors from the Navy&#8217;s newest aircraft carrier, the USS Ronald Reagan, paused during their Pacific deployment last week to commemorate the 1942 Battle of the Coral Sea near the Solomon Islands, during which Japanese forces sunk the carrier USS Lexington, according to a Pacific Fleet statement.

As part of the ceremony, sailors from the ship held a burial at sea for 12 deceased servicemembers, including the grandfather of one of the Reagan&#8217;s sailors.

&#8220;It was a fitting tribute,&#8221; Petty Officer 1st Class Valerie McNairy was quoted as saying in a Navy statement. Her grandfather survived the attack on Pearl Harbor aboard the USS West Virginia.

The ship, on its maiden voyage from its homeport in San Diego, currently is in the Seventh Fleet area of operations, which includes the Pacific Ocean. After leaving Australia, the ship passed the location of the first of six major carrier battles between the United States and Japan in World War II, according to the Naval Historical Center.

The Battle of the Coral Sea, in May 1942, was the first battle in which the participating carriers never saw each other. The battle cost the U.S. forces the Lexington as well as an oiler and a destroyer, according to the Navy. The Japanese forces lost one carrier and lost operational capacity on another carrier as well as a destroyer.

Reagan sailors remembered the event and the deceased servicemembers with a 21-gun salute and the playing of taps, the statement said.

The sailors also laid a wreath for the Japanese aircraft carrier Shoho that was sunk during the battle.

&#8220;It&#8217;s celebrating the death of the men who were fighting for what they believed in, on both sides,&#8221; Chief Petty Officer Jason Zaun, a religious programs specialist who helped coordinate the event, was quoted as saying. &#8220;We believed a certain way and our men died for our cause, and the Japanese believed their way and they died for what they believed in. It&#8217;s good that we&#8217;re celebrating both sides.&#8221;