The USS Ronald Reagan anchors in the bay during a port call to Sasebo Monday. (Travis J. Tritten / S&S)

The USS Ronald Reagan anchors in the bay during a port call to Sasebo Monday. (Travis J. Tritten / S&S) 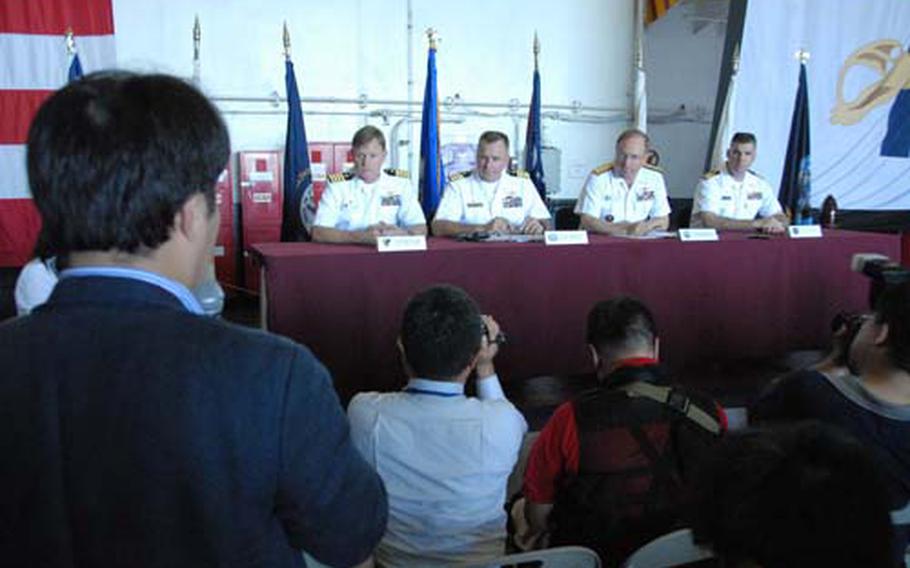 It is the first visit by an aircraft carrier since February, when the USS Nimitz anchored in the harbor.

Base personnel spent the weekend readying for the thousands of additional servicemembers expected to take liberty leave this week while the two ships are in port.

The nuclear-powered carrier was greeted with some protests &#8212; a typical occurrence for a nuclear carrier &#8212; in Nagasaki Prefecture, where the base is located, according to media reports.

Rear Adm. Phil Wisecup, the carrier strike group commander, said his sailors will be on their best behavior during the visit, which is expected to last several days.

"We have worked very hard since our last port call to make sure our sailors understand how important this visit is," Wisecup said.

About 150 Reagan sailors were signed up for Sasebo community service projects on Monday, he said.

"The baseball games are huge," Lebling said. "We just bought every [ticket] we could get."

The influx of sailors will pump about $1 million a day into the local economy, said Charles Howard, base spokesman.