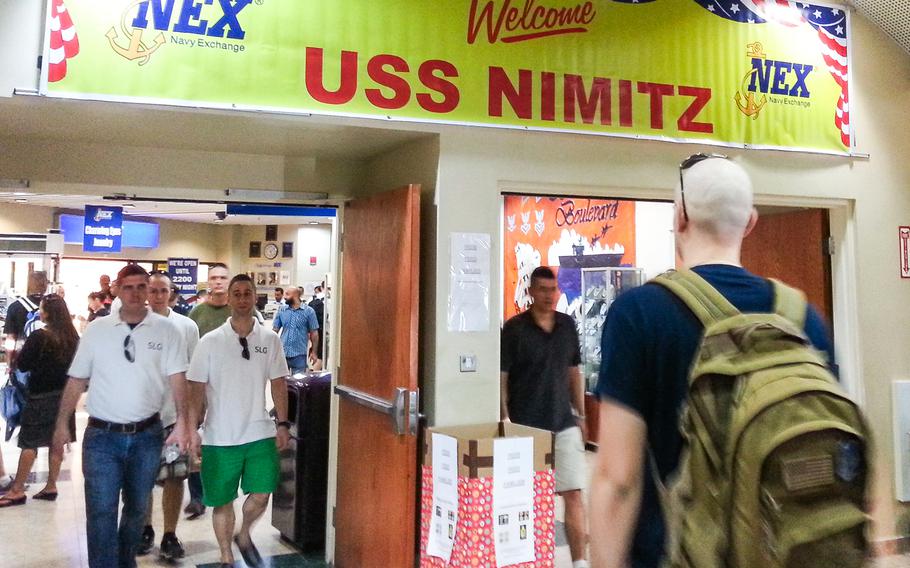 Buy Photo
USS Nimitz sailors crowd the halls around the Navy Exchange at Naval Support Activity Bahrain upon disembarking from the ship Friday for a port visit. The Nimitz has been deployed since March, and arrived in the 5th Fleet area of responsibility in June to support maritime security operations. (Hendrick Simoes/Stars and Stripes)

MANAMA, Bahrain — The USS Nimitz aircraft carrier arrived in Bahrain for a port visit Friday before an easing of security restrictions that closed embassies across the Middle East and northern Africa.

On Sunday, 18 of 19 American embassies and consulates, which had been closed for a week due to security concerns, reopened, including the embassy in Bahrain. The embassy in Yemen remained closed “because of ongoing concerns about a threat stream indicating the potential for terrorist attacks emanating from Al Qaeda in the Arabian Peninsula,” a State Department statement said. The U.S. consulate in Lahore, Pakistan, closed Thursday due to “a separate credible threat,” also remained shuttered.

U.S. embassies were closed last Sunday amid concerns that al-Qaida or affiliated groups in the Arabian peninsula could be planning a “major” attack this month.

“We will also continue to evaluate information about these and all of our posts and to take appropriate steps to best protect the safety of our personnel, American citizens traveling overseas, and visitors to our facilities,” State Department spokesperson Jen Psaki said in the statement, issued Friday.

A worldwide travel alert for U.S. citizens remains in effect — specifically stressing travel in North Africa and the Middle East.

At the U.S. Navy base in Bahrain, where the U.S. 5th Fleet headquarters is located, officials described operations as “normal and regular.”

Navy officials say they “maintain an array of force protection options” in Bahrain and around the region. Sailors and families living in the country were recently told to expect more Bahraini police presence around the base, for example.

The Nimitz has been deployed since March, and arrived in the 5th Fleet area of responsibility in June to support maritime security operations — including flying combat missions over Afghanistan.

It arrived in Bahrain on a routine scheduled five-day port visit to allow its crew of approximately 5,000 sailors some rest and relaxation.

“We hope the Sailors and Marines from USS Nimitz enjoy themselves as well as enjoy all that the Kingdom of Bahrain has to offer,” said Lt. Marissa Myatt, U.S. Navy 5th fleet spokesperson.

However, increased political unrest in Bahrain recently also has U.S. officials on edge. On Saturday base officials declared the Manama Souq — a highly popular shopping area — off-limits until further notice to U.S. personnel because of demonstrations in the area.

Some opposition groups have declared Wednesday a day of rebellion. The Bahraini government has banned any protests associated with that call.

The predominantly Shiite Muslim opposition movement in Bahrain is demanding political and economic reforms from the ruling Sunni establishment. Shiites make up more than two-thirds of Bahrain’s citizens.

At the naval base, however, officials have not indicated any change to regular operations.