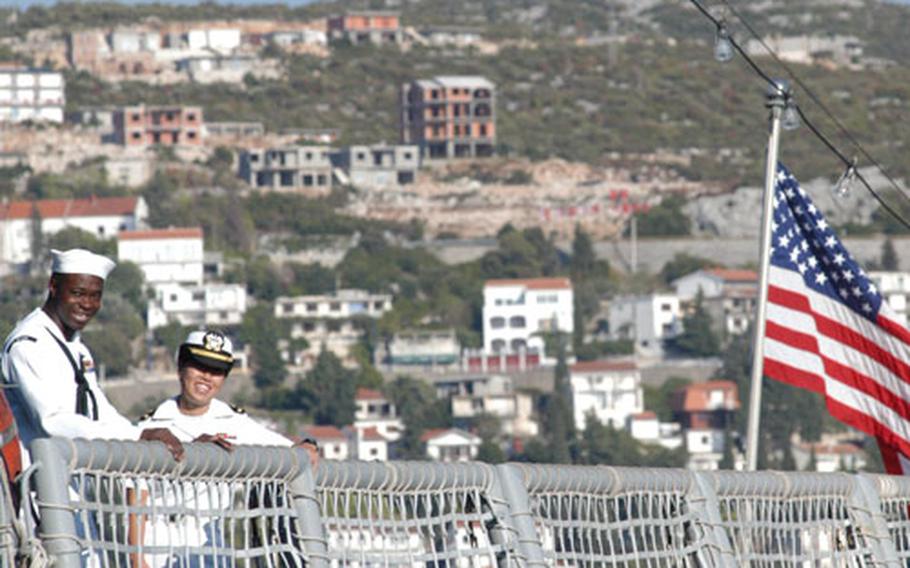 A couple of sailors aboard the USS Nicholas flight deck chat on Friday. In their background is the Bosnian coastal town of Neum. Nicholas is the first foreign ship to anchor in the Bosnian waters of the Adriatic Sea since a 1914 visit by an Austro-Hungarian vessel. (Ivana Avramovic / S&S)

NEUM, Bosnia and Herzegovina &#8212; The USS Nicholas made history Friday as the first foreign ship to visit this Bosnian coastal town since 1914.

Media cameras and curious passersby gathered to record the arrival of the U.S. guided-missile frigate, which anchored 150 meters from the beaches of Neum.

The last foreign ship to pull into port was an Austro-Hungarian ship nearly nine decades ago, according to local historians.

Ships off the Adriatic coast are a common site, but it&#8217;s unusual to see it in Neum, said Boris Gasevic, a 15-year-old Bosnian, who was among a crew of divers hired to inspect the sea bottom.

The symbolic visit started with a Bosnian brass band playing the national anthems of the two countries and U.S. Navy officers and local government officials exchanging gifts of bottles of wine.

One of the first Bosnian officials to greet the crew was Deputy Minister of Foreign Affairs Ibrahim Dikic.

&#8220;This represents one of the first steps of Bosnia and Herzegovina symbolically becoming a member of European and Atlantic integrations,&#8221; he said.

The Croatian peninsula of Peljesac runs parallel to the 14 miles of Bosnia&#8217;s coast to create a narrow baylike water passage. A reef in between requires extra attention when sailing into Neum, a beach-vacation destination dominated by four large hotels.

While the small frigate carrying some 240 sailors has a shallower draft than many, other U.S. ships could have made it through, said Navy Lt. Tracy Brines, the Nicholas&#8217; operations officer.

It&#8217;s been a busy trip for the Norfolk, Va.-based frigate. The Nicholas has made recent port visits to Suda Bay in Crete, St. Petersburg in Russia, Rhodes in Greece, Rota in Spain, Copenhagen in Denmark and visited Italy before coming to Bosnia.

During a recent deployment to the Persian Gulf, the crew rescued a downed U.S. Air Force F-16 pilot from the waters off the coast of Kuwait, and located and rescued 16 Albanian citizens from a capsized lifeboat.

&#8220;We actually had to get a hold of the British Admiralty and get some of their charts simply because we did not have it (Neum) in any of our records,&#8221; said Petty Officer 3rd Class Ellic Mottram. &#8220;That made it a little interesting but we jumped through a few hoops and managed to get the information.&#8221;

The sailors had a chance to tour the town of Mostar, a city an hour north of Neum and Medjugorje, a pilgrimage town made famous for its claims of Virgin Mary apparitions.

Some sailors took part in soccer matches and basketball games against local teams.