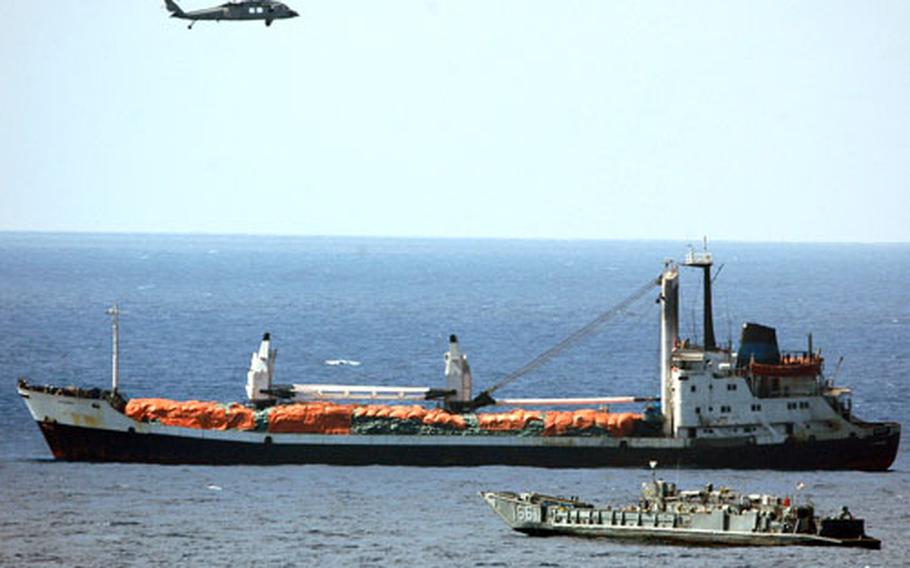 The Navy amphibious assault ship USS Nassau last week provided food, water and engineering assistance to the crew of a cargo ship drifting about 680 miles off the coast of Kenya.

The sailors also provided medical aid for four sick members of the 21-man crew aboard the cargo ship al-Manara, according to a Navy press release

Sailors from the ship and embarked units also delivered fresh food and thousands of gallons of water to the ship, despite rough seas during the Tuesday operation.

&#8220;We were at the limit when it came to operating our small craft in these waters, and it wouldn&#8217;t have been a success if those involved hadn&#8217;t done their jobs just like they were trained to do,&#8221; said Lt. Cmdr. David Tarwater, of the embarked Beach Master Unit Two.

&#8220;Any time you can help out a fellow sailor on your ship or on another ship always makes you feel like a better person,&#8221; Tarwater added. &#8220;When we left, they were all in better spirits, smiling, laughing and thanking us for what we gave them.&#8221;

The 40,000-ton Nassau, which carries helicopters, Harrier jets, and hundreds of Marines, is taking part in maritime security operations in the region. These operations, according to the Navy 5th Fleet release, are designed to prevent terrorists from attempting to use the sea for attacks against shipping or for transporting personnel, weapons or other material.

The seas of Somalia, northeast of Kenya, are also some of the most dangerous waters for piracy. The Navy destroyer USS Winston Churchill captured a suspected pirate ship off Somalia on Jan. 21.

The Nassau is based in Norfolk, Va.