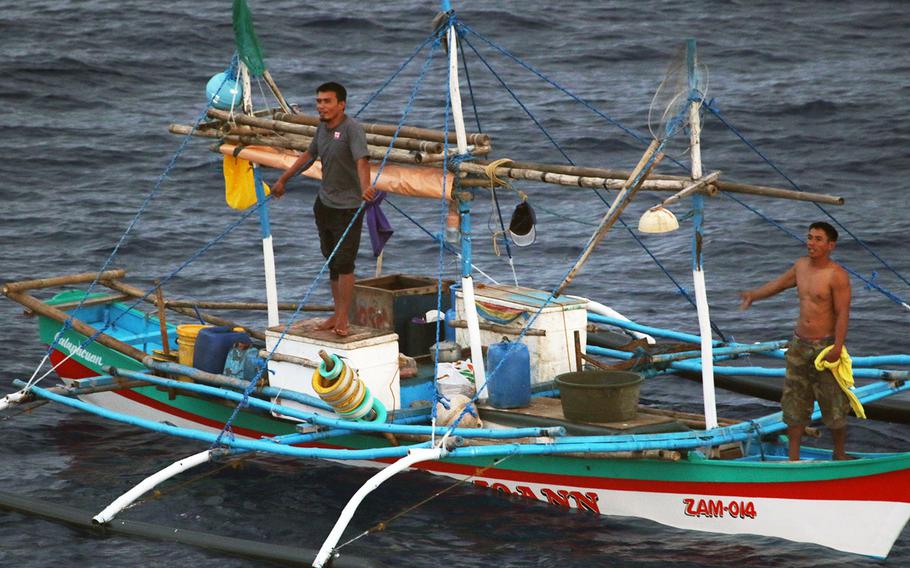 A pair of stranded Filipino fishermen were towed to safety by members of the crew of the USS Mustin on June 26, 2018. (U.S. Navy)

A pair of stranded Filipino fishermen were towed to safety by members of the crew of the USS Mustin on June 26, 2018. (U.S. Navy) Sailors from USS Mustin transfered food and supplies to two Filipino fishermen after their fishing boat's engine broke down in the South China Sea. (U.S. Navy)

The Japan-based guided missile destroyer USS Mustin helped a pair of stranded Filipino fishermen whose boat broke down in the South China Sea rejoin a group of fishing vessels.

During the Mustin’s routine patrol on Tuesday, two fishermen waved frantically to get the attention of the crew and explained that their small boat’s engine had malfunctioned, according to a U.S. Navy statement.

Tagalog-speaking watch standers on board were able to translate for the fishermen, who said they had no food aboard and no radio to communicate with the local coast guard. The Mustin’s crew contacted another nearby fishing vessel and towed the stranded fishermen’s vessel to join others using a rigid hull inflatable boat. They also provided three days worth of food to the fishermen.

Cmdr. Warren Smith, the Mustin’s commanding officer, said in a statement that he was proud of the sailors’ work.

“That pride extends from my bridge watch officers who spotted the Filipino mariners in the distance indicating distress by waving their shirts over their heads, to our Tagalog speakers who could break through the language barrier to determine the extent of the distress, and finally to my small boat team for their ability to tow the fishing boat to safety during heavy rain, lightning and thunderstorms," he said.

Hospital Corpsman 2nd Class Nicasio Bone, a Filipino-American sailor, said he was glad to have been able to translate.

"As luck would have it, I was already on the bridge and was able to help with the language barrier using the ship's announcing system,” he said. “It is the right thing to do to help people in distress and if anyone was put in the same position as me, they would bring the same help. I was really impressed by how the ship came together at the end of a long day to help these two fishermen; it seemed natural to do."