USS Mount Whitney will take over as flagship of 6th Fleet, officer says 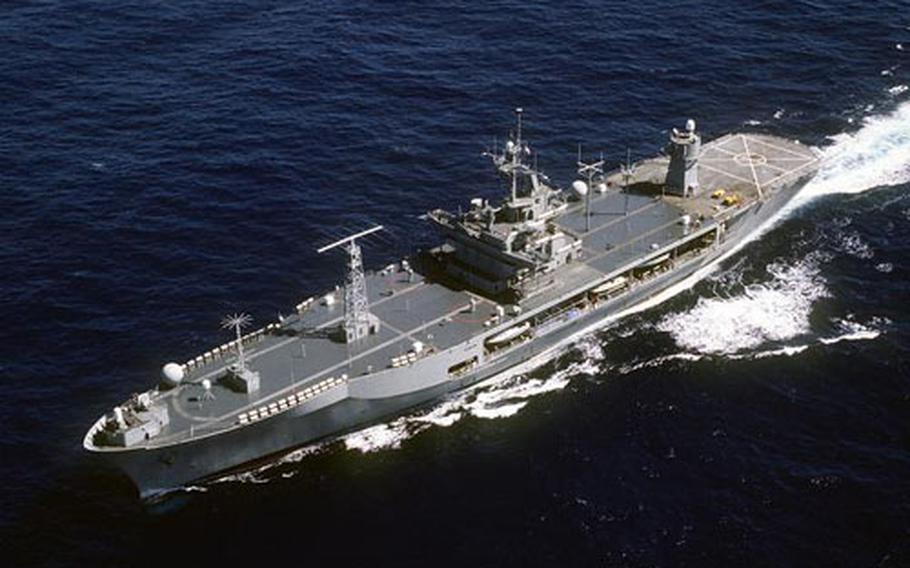 The possible move of the U.S. Navy&#8217;s 6th Fleet from Gaeta, Italy, to Naples also could include a change of the flagship.

The Norfolk, Va.-based USS Mount Whitney will replace the aging USS La Salle next year, according to a Navy officer on the ship who spoke on the condition of anonymity.

The Mount Whitney is expected to arrive in Gaeta &#8212; halfway between Rome and Naples &#8212; early next year and take over duties from La Salle. La Salle then is expected to return to the East Coast and be decommissioned.

Gaeta commanding officer Cmdr. Nannette Roberts was quoted earlier this year in the weekly base newsletter as saying &#8220;The Mount Whitney is coming &#8230; and will be converted to a [Military Sealift Command] USNS when she [sic] comes &#8230; .&#8221;

Roberts later told Stars and Stripes that the statement was just the latest &#8220;rumor&#8221; for any pending changes.

Naval Forces Europe spokesman Capt. Gordon Hume wouldn&#8217;t comment on the plans. The transfer of Mount Whitney to the Military Sealift Command would not be unique for a flagship. Last November, the 3rd Fleet flagship, USS Coronado, was decommissioned and transferred to the command.

An article written by sealift commander Vice Adm. David Brewer in December 2003 states that &#8220;&#8230; MSC has proffered proposals to the Chief of Naval Operations and the fleet to transfer ship operations of command ships, salvage ships, and submarine tenders to MSC.

&#8220;As a proof of concept for MSC ship operations of command ships, the CNO and Commander of Pacific Fleet agreed to transfer the [3rd] Fleet command ship, USS Coronado, to MSC in Nov. 2003,&#8221; wrote Brewer in the on-line version of MSC&#8217;s Sealift magazine.

&#8220;MSC can also operate submarine tenders, essentially providing combat logistics, maintenance and repair services for submarines as we do already for the surface fleets,&#8221; wrote Brewer in his December 2003 article.