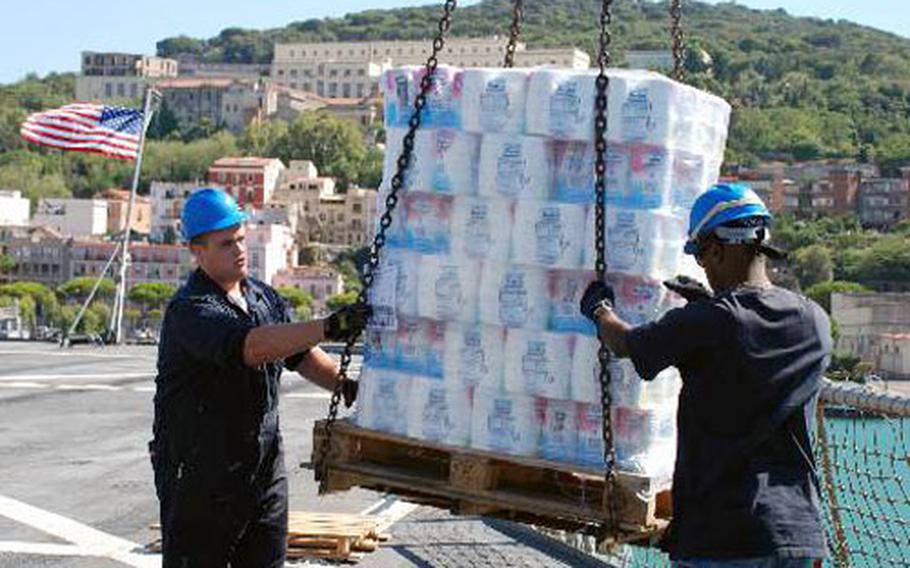 The ship left its homeport of Gaeta, Italy, on Aug. 26, but "conducted routine operations in the area" before making a brief port visit to Souda Bay, Crete, and then sailing toward the Black Sea, said Cmdr. Scott Miller, a spokesman for Naval Forces Europe/6th Fleet.

"Without going into specifics with dates, the government of Turkey monitors the passage and approves passage through the Turkish straits, so that translates when our ships will head that way," Miller said.

The Mount Whitney is the third and final planned ship the Navy intends to use to deliver humanitarian assistance to Georgia. Aid already was delivered by the guided-missile destroyer USS McFaul, followed by the U.S. Coast Guard cutter Dallas.

The McFaul has left the area, sailing out of the straits on Monday, "continuing on with routine operations," Miller said.

The Dallas pulled into the Ukrainian port of Sevastopol on Monday "to participate in previously scheduled theater security cooperation activities with the Ukrainian Navy," reads a portion of a Navy news release.

The visit has been scheduled since the spring, the release states.

The Dallas avoided pulling into the Georgian port of Poti last week, where Russian forces were posted on the outskirts. U.S. officials reportedly feared the heavily-damaged port might have been mined.

Russian officials have expressed anger over the presence of NATO warships in the Black Sea, and have accused the U.S. Navy of including weapons and military systems with the humanitarian aid.

Citing security reasons, the Navy won&#8217;t disclose whether the Mount Whitney will use the port of Batumi, well south of the zone of fighting.

"At this point, we are considering all options as we head to Georgia.

"What port is ultimately chosen, that determination will be made by the Navy, the government of Georgia and the international team there supporting this humanitarian aid mission," Miller said.