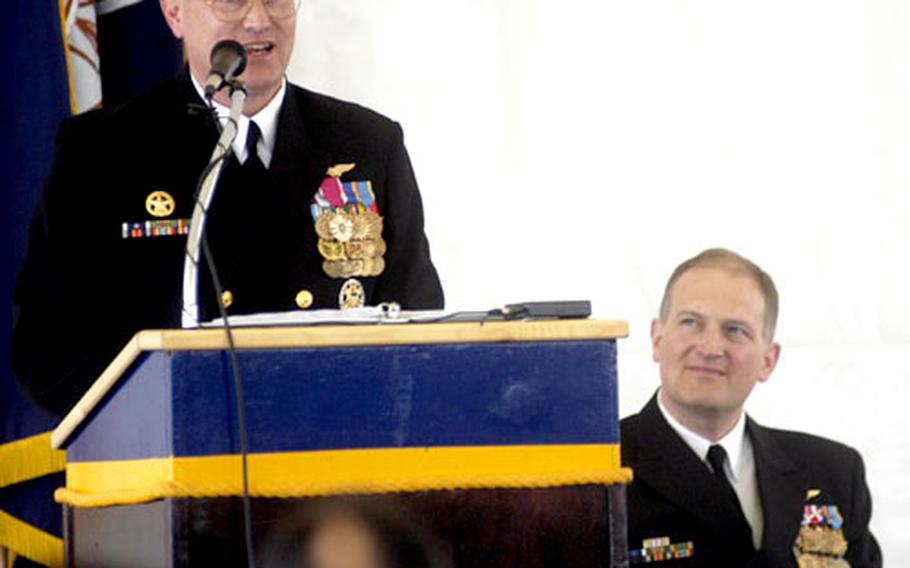 GAETA, Italy &#8212; When Capt. C. Ladd Wheeler took over the helm of USS Mount Whitney last year, his change of command ceremony almost paled in comparison to the other changes the ship was undergoing.

The Mount Whitney had just become the 6th Fleet flagship, was transitioning from a 650-member all-Navy crew to one of about 330 sailors and civilian mariners of the Military Sealift Command, and had shifted homeports from Norfolk, Va., to Gaeta.

But when Wheeler turned over command to Capt. Joseph Kuzmick on Wednesday, all eyes and efforts were focused on the two naval aviators.

Wheeler will be leaving Italy to become chief of staff for Naval Air Force Atlantic in Norfolk, Va.

Kuzmick takes command under a less tumultuous time, although its not necessarily any less busy.

During his remarks, Stufflebeem said that the Mount Whitney will be leading the NATO Response Force in Exercise Steadfast Jaguar off the Cape Verde islands, leaving Gaeta for the West African nation in June.

Kuzmick kept his remarks short, greeting the assembled visitors and thanking Wheeler and other U.S. and NATO leaders at the ceremony.