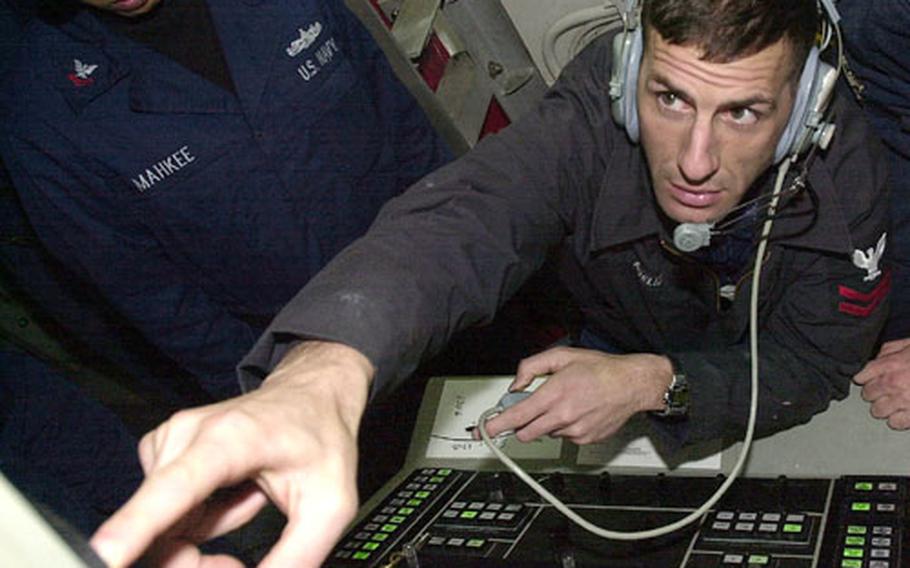 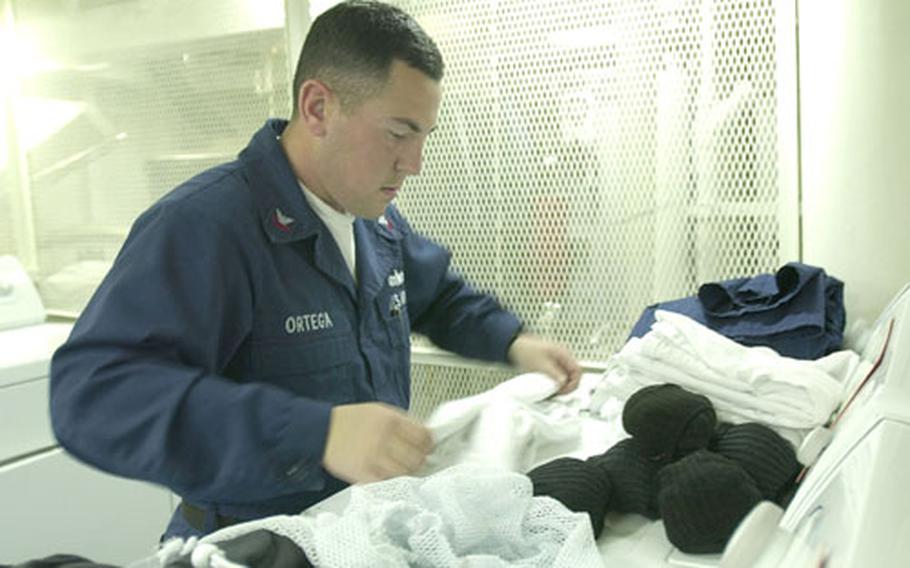 Navy Petty Officer 2nd Class Kevin Ortega performs a task rarely seen on a U.S. Navy ship at sea: He&#39;s folding his own laundry. Under USS Milius&#39; manning experiment, laundry details were eliminated and sailors are responsible for washing their own clothes, just one of the many changes to streamline operations on the ship. (Mark Oliva / S&S)

There aren&#8217;t enough sailors to man the mess lines. Sailors are forced to do their own laundry. Things are so tight, there is only one signalman on board to wave flags at allied ships in the region.

In all, the Milius has nearly 60 fewer sailors than other Navy guided-missile cruisers. Life has never been better.

Two years ago, the Milius began a program to cut its crew by 20 percent. Now, 270 sailors are doing the work once handled by 330.

To gauge the experiment&#8217;s success, crews&#8217; man-hours are being logged and compared with those of USS Higgins, another guided-missile destroyer deployed to the Persian Gulf.

Hetland said the Navy has not been manning its ships smartly.

Costs to keep a single seaman recruit at sea adds up to roughly $50,000 a year. The Navy could save millions of dollars if each ship left just a few crewmembers on the docks, proponents of the program say.

Technological advances help ease the burden of some of the cuts, and nearly every department aboard has fewer sailors.

Hetland said sailors use laser range finders instead of sounding ropes to gauge distances between ships during underway replenishments. The handheld range finder costs $300 and takes the place of several sailors who otherwise would tend to ropes.

In the engineering department, two sailors were cut from the manning document, and the underway watch schedule was reshuffled dropping two sections from seven a day to five, using seven sailors instead of nine.

The cuts may mean extra work, but it also means extra room.

Space previously used for storage is now an extra gym; an Internet caf&#233; was added to allow sailors 24-hour access to personal e-mails.

&#8220;We have an open laundry room for the sailors to go do their laundry whenever they need to,&#8221; Hetland said.

So far, the program is finding favor with the sailors.

Lewis said he could see other small ships across the Navy carrying fewer crewmembers.

Instead of putting an end to the experiment, senior leaders are calling it a success: Larger ships are trying it as well. The USS Tarawa and USS Bonhomme Richard &#8212; both amphibious assault ships with crews nearing a thousand &#8212; are already running with smaller crews.

The USS Milius is about as sophisticated a warship as they come. The guided-missile destroyer is equipped with state-of-the-art radar, navigation and electronic warfare equipment. It carries Tomahawk cruise missiles guided by satellites and global positioning systems for land attack and Harpoon anti-ship missiles.

But the hulking gun mount on the ship&#8217;s bow shows how some things in the Navy never change.

More importantly, the gun fills the gap. Rounds launched from Milius&#8217; main gun can hit targets Tomahawks and Harpoons can&#8217;t. Additionally, the ship has few missiles on board when compared with the number of rounds it carries.

Rapid-fire is important to the ship for self-defense and shore bombardment.

Naval guns might be a holdover from the Navy&#8217;s early days, but they&#8217;re anything but low-tech. The rounds are aimed by the ship&#8217;s radar system, the same system that aids in guiding missiles.

&#8220;We have extended-range munitions, multiuse fuses and can drop sub munitions on the battlefield,&#8221; Pinchinat said.

The gun itself is robotically controlled. A drum holds 20 rounds, ready to fire all the time and can be triggered by remote control from the ship&#8217;s combat systems center.

&#8220;The electronics are constantly being upgraded on the gun. The days of analog technology are gone,&#8221; Broglia said.

Normally, crews of five or six work below the gun mount. During a fire mission, a couple of sailors work several decks below in the ship&#8217;s magazine, loading the rounds and charges into the drums. Others work just below the gun, monitoring firing sequences and gun function to identify any problems. But even there, technology steps in. The gun self-identifies both electronic and manual malfunctions. The gunner&#8217;s mates can fire the gun from their station below the gun, but normal firing comes from the ship&#8217;s combat center, where fire-controlmen can directly coordinate with radar technicians.