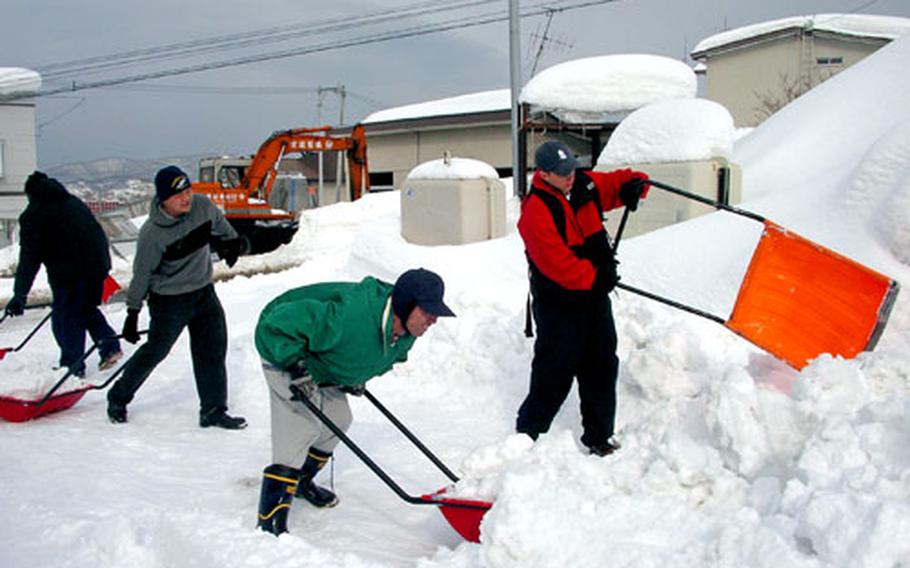 Sailors from the Yokosuka, Japan-based USS John S. McCain help dig out a school for the mentally challenged Tuesday in the city of Otaru on Japan&#39;s northern island of Hokkaido. The McCain completed a scheduled port visit to the city this week. (Courtesy of the American Consulate General in Sapporo)

Sailors from the USS John S. McCain paid a visit last week to Japan&#8217;s northern island of Hokkaido, where they played a game of hoops with high school students and helped dig out a school for the mentally challenged from more than 6 feet of snow.

The stop in Otaru, Japan, a coastal city about 1&#189; hours north of Sapporo, was part of a scheduled port visit, according to 7th Fleet spokesman Chief Petty Officer Rick Chernitzer.

&#8220;The crew always enjoys opportunities to visit cities such as Otaru, and to experience the different regions of Japan, which is one of America&#8217;s closest allies,&#8221; Chernitzer said in a written statement.

The McCain, with 300 crewmembers on board, arrived Feb. 5 to begin four days of goodwill meetings, receptions and community-service activities, said a spokeswoman with the American Consulate General in Sapporo, which coordinated the ship&#8217;s community outreach events in Otaru.

Their activities included a visit to Hokkaido International School, where the ship&#8217;s basketball team, known as the &#8220;McCain Men,&#8221; held a clinic for 12 members of the high-school boys&#8217; basketball team. The sailors and students also formed mixed teams and played a round robin half-court tournament and full-court championship game, according to the consulate spokeswoman, who said the students had anxiously awaited the ship team&#8217;s visit because it offered them a rare opportunity to hone their skills.

A group of 25 enlisted sailors and officers from the McCain also helped remove snow from the roof and grounds of Wako Gakuen, a school for the mentally challenged. In some places, snow had accumulated to more than 6 feet and was partially blocking windows.