Buy Photo
The USS John S. McCain floats for the first time in 11 months as its dry dock at Yokosuka Naval Base, Japan, is filled with water, Tuesday, Nov. 27, 2018. (Caitlin Doornbos/Stars and Stripes)

Buy Photo
The USS John S. McCain floats for the first time in 11 months as its dry dock at Yokosuka Naval Base, Japan, is filled with water, Tuesday, Nov. 27, 2018. (Caitlin Doornbos/Stars and Stripes) 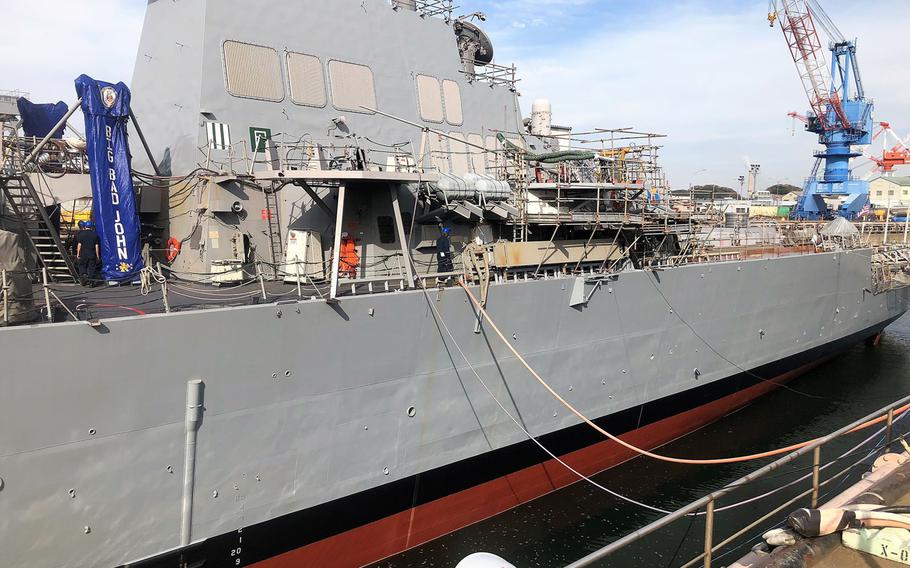 Buy Photo
The USS John S. McCain sits in several feet of water at Yokosuka Naval Base, Japan, Monday, Nov. 26, 2018. This area of the port side is where a merchant vessel impaled the ship during the deadly collision in August 2017. (Caitlin Doornbos/Stars and Stripes) 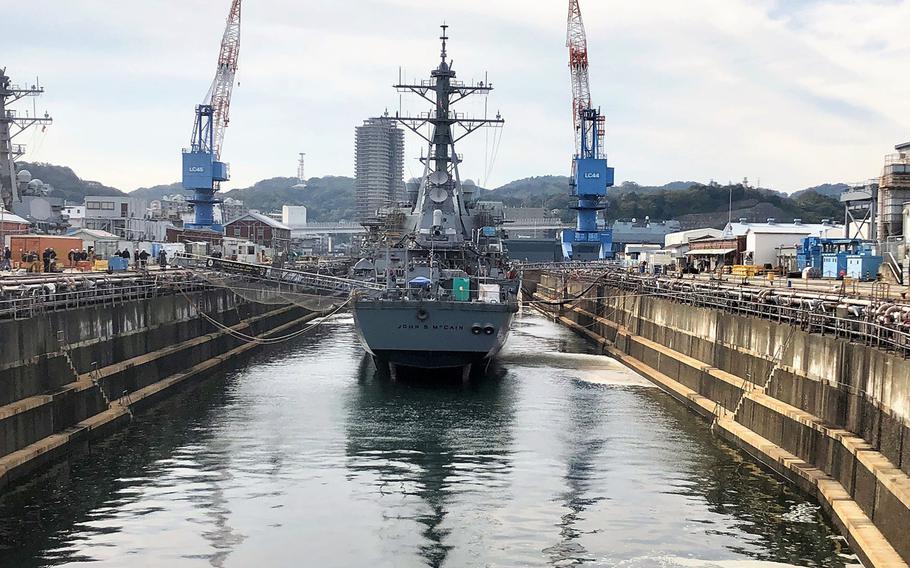 Buy Photo
The USS John S. McCain has been undergoing repairs at Yokosuka Naval Base, Japan, since its deadly collision with a merchant ship in August 2017. (Caitlin Doornbos/Stars and Stripes)

YOKOSUKA NAVAL BASE, Japan — The USS John S. McCain floated again into the waters of its homeport on Tuesday, 15 months after a collision with a civilian oil tanker left 10 sailors dead and the destroyer severely damaged.

The 6,700-ton ship sat atop several feet of water Monday in its dry dock. By Tuesday, waters filled the dock and lifted the ship, which is named for the late senator from Arizona and his father and grandfather, both Navy admirals.

Onlookers from around base flocked to the U.S. Naval Ship Repair Facility as they heard the news.

Sailors and civilians who’d worked on the repairs stood aboard the ship in hard hats as the McCain slowly crept out of the dock. It took a systematic process involving tug boats and rope to pull the destroyer from its home of 11 months.

The McCain eventually reached its new berth, nestled between other destroyers and cruisers along the base pier.

On Aug. 21, 2017, the McCain collided near Singapore with a civilian oil tanker, which impaled itself into the ship’s port side. Confusion among watch-standers had led to a loss of steering control, and the destroyer crossed into the tanker’s path. The impact crumpled a berthing area and caused heavy flooding. Ten sailors died.

The McCain collision was the second major fatal accident involving a destroyer last year. The USS Fitzgerald — also homeported at Yokosuka — collided with a Philippine-flagged container ship on June 17, 2017, just south of Japan, killing seven sailors. The Fitzgerald is undergoing repairs at the Ingalls Shipbuilding yard in Pascagoula, Miss.

The damaged McCain was sent to Yokosuka, its homeport. However, its hull cracked on the starboard side while it was being transported by a heavy-lift vessel, so it detoured to the Philippines in October 2017. The ship finally arrived in Japan in January and had been tucked away since then in a dry dock at the Yokosuka repair facility.

The collision left a gaping hole in the McCain. Repairs were made from the ship’s hull to its mast, with scaffolding covering much of the ship for months. Seventh Fleet officials declined a request for comment Tuesday and further details of the ship’s improvements were not available.

Hoses, ropes, scaffolding and other construction equipment covered the ship at a ceremony held this summer on the destroyer to rededicate the ship and include Sen. John McCain on the list of the ship namesakes. Prior to July, the ship was named in honor of the McCain admirals.

At the July ceremony, Secretary of the Navy Richard Spencer told reporters that he expected the McCain to return to sea early next year.

“I think we’re looking at spring of 2019 to get her underway with trials and make sure she’s good to go, and then head out to the fleet,” he said.