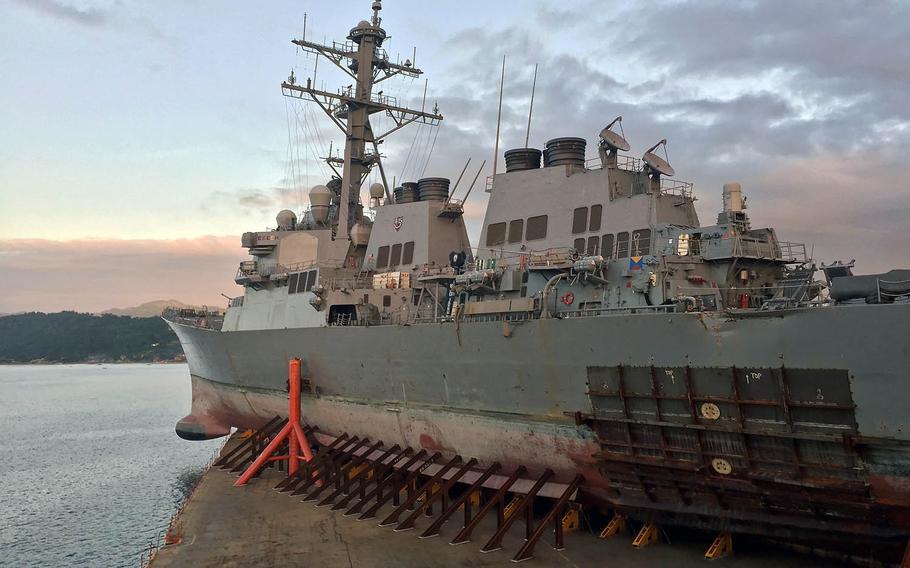 YOKOSUKA NAVAL BASE, Japan — The collision-damaged USS John S. McCain is finally on its way to Japan after repair and weather issues forced a diversion to the Philippines last month.

The guided-missile destroyer — which collided with a commercial oil tanker near Singapore over the summer, killing 10 sailors — was en route to Yokosuka aboard the heavy lift vessel MV Treasure on Oct. 22 when it changed course to Subic Bay, Philippines. The decision was based on new cracks discovered in the ship’s hull and severe weather caused by Typhoon Lan, the Navy said.

In Subic Bay, technicians determined that the McCain needed additional blocks to support it aboard the Treasure, said a Navy statement issued Tuesday. Once the warship arrives in Yokosuka — its homeport — it will undergo a lengthy repair process to bring it back into service.

“[Ship Repair Facility-Japan Regional Maintenance Center] is making preparations to begin remediation and repair efforts immediately once the ship is dockside,” Lt. Cmdr. Sandra Wyman, of SRF-JRMC, said in the statement. “The project will be one of the largest SRF has undertaken.”

The McCain departed Singapore earlier this month after being patched up from the deadly Aug. 21 collison. The ship’s commanding officer, Cmdr. Alfredo Sanchez, and executive officer, Cmdr. Jessie Sanchez, were relieved in October for what the Navy called a “preventable” collision. Alfredo Sanchez displayed “poor judgement” while Jessie Sanchez “exercised poor leadership of the ship’s training program,” a statement said.

The McCain’s sister ship, the USS Fitzgerald, is being sent to Ingalls Shipbuilding in Pascagoula, Miss., for repairs after seven sailors were killed in a June 17 collision with a merchant vessel off Japan.

The crippled USS Fitzgerald departed Yokosuka on Nov. 23 but was forced to return Monday after suffering a pair of punctures while being loaded onto a heavy lift vessel for its trip stateside.