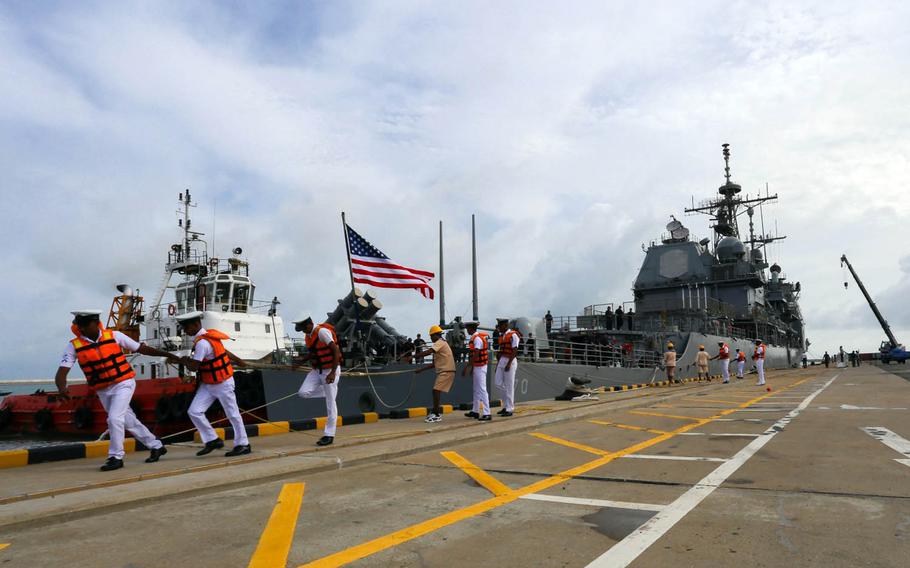 The guided-missile cruiser USS Lake Erie arrives in Colombo, Sri Lanka, to support humanitarian assistance operations in the wake of severe flooding and landslides that devastated many regions of the country, Sunday, June 11, 2017. (Joshua Fulton/U.S. Navy)

The Sri Lankan government estimates more than 200 have died and tens of thousands have been forced out of their homes by the floods and mudslides after heavy monsoon rain hit the island nation located just south of India.

The Lake Erie arrived in the nation’s capital of Colombo on Sunday, a Navy statement said.

The deployment of the Ticonderoga-class guided-missile cruiser and its complement of helicopters will add to the $2.3 million in U.S. aid that the State Department announced June 4 in response to the disaster.

“We will work closely with our interagency partners from the U.S. Department of State, U.S. Agency for International Development, and others to ensure continued, timely and swift responses to requests from the Government of Sri Lanka,” he added.

U.S. military personnel were on the island as recently as March. The visit was part of Pacific Partnership, a series of disaster-response drills that have been ongoing throughout the Pacific since the 2004 Indonesian tsunami that killed hundreds of thousands of people.

The Lake Erie left its homeport of San Diego in May on an independent deployment to the Western Pacific with a detachment from Helicopter Maritime Strike Squadron 49, the Navy statement said.