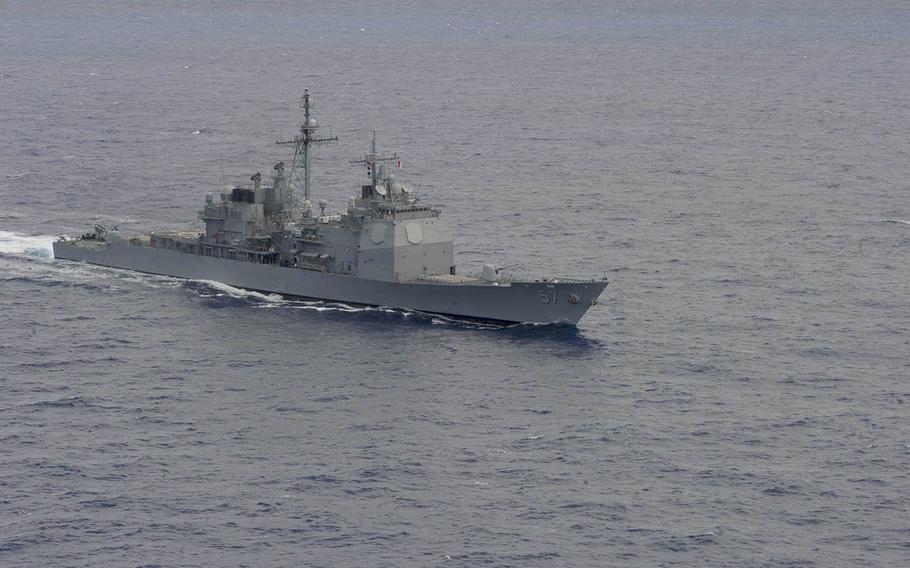 YOKOSUKA NAVAL BASE, Japan — The commander of a U.S. warship that collided with a South Korean fishing vessel last spring was disciplined along with several members of his crew, the Navy revealed Tuesday.

There were no injuries when the guided-missile cruiser USS Lake Champlain collided with the 60- to 70-foot-long fishing boat east of the Korean Peninsula on May 9. The warship was able to finish its five-and-a-half-month deployment and Capt. Chris Cegielski, in charge of the warship during the collision, kept his job until last month, when he handed command to Capt. Jen Ellinger.

However, “administrative and disciplinary actions” were taken against Cegielski, his executive officer and several members of the Lake Champlain’s watch team after the crash, U.S. Pacific Fleet spokeswoman Lt. Cmdr. Nicole Schwegman said in an email.

Results of an accident investigation, which concluded in June, won’t be released to the public pending litigation, she said.

The mishap was part of a slew of accidents involving U.S. warships in the Pacific this year.

The captains of the Antietam, Fitzgerald and McCain were relieved. The commanders of the 7th Fleet, Task Force 70 and Destroyer Squadron 15 were also relieved, and Pacific Fleet Commander Adm. Scott Swift announced last month he would retire after learning he would not be tapped to lead Pacific Command.

In response to the collisions, the Navy announced the creation of the Naval Surface Group Western Pacific to help assess whether ships in the Pacific are ready to deploy. The unit is led by Capt. Richard Dromerhauser, a former Fitzgerald commander who previously served as the head of 6th Fleet’s Destroyer Squadron 60, based out of Rota, Spain.