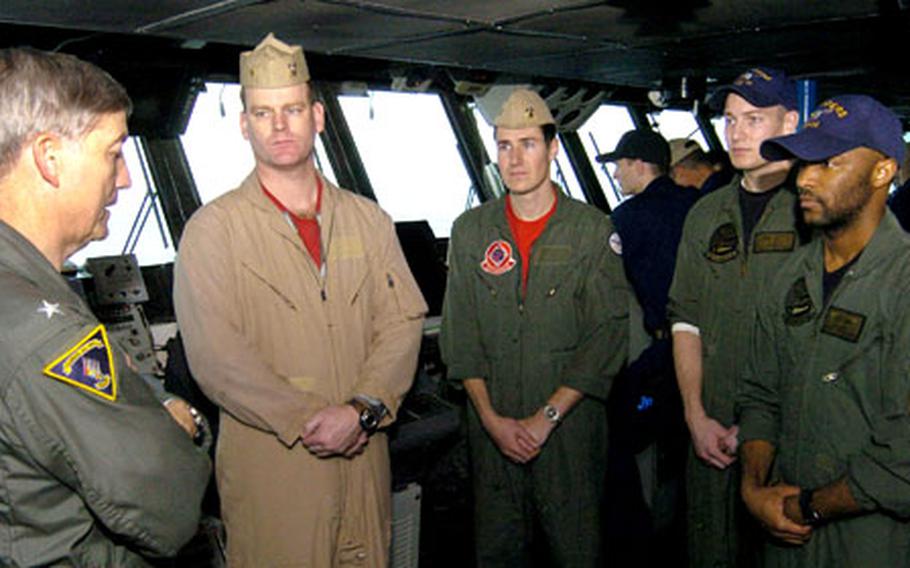 The crew of a fighter jet lost at sea when they tried to land on the USS Kitty Hawk &#8212; and troops who saved some of those crewmembers &#8212; recall last Saturday night as one they won&#8217;t soon forget.

The F/A-18F Super Hornet from Strike Fighter Squadron 102 was attempting a night recovery, or landing, about 6:30 p.m., according to a Kitty Hawk spokeswoman. When the Atsugi Naval Air Facility aircraft couldn&#8217;t stop, both pilots ejected.

The Super Hornet subsequently fell off the aircraft carrier and into the Pacific Ocean about 100 miles southeast of Yokosuka Naval Base, the Kitty Hawk&#8217;s permanent base of operation.

&#8220;An SH-60F Seahawk of Helicopter Antisubmarine Warfare Squadron 14, which was on the flight deck at the time of the accident, sustained substantial damage to its tail section&#8221; when the plane hit it, Dias added. &#8220;No damage impacting the operational capability of USS Kitty Hawk occurred.&#8221;

Six servicemembers were injured in the accident, with three still hospitalized as of Monday afternoon, the spokeswoman said. The Navy on Monday released the names, ranks and medical conditions of those injured and stated that the incident remains under investigation.

Two swimmers &#8212; Petty Officers 2nd Class Jerard Cook and Bennie Romiti &#8212; were lowered from separate rescue helicopters. &#8220;At first, I didn&#8217;t believe that it was for real when I heard the call coming in over the radio,&#8221; said Cook, an aviation warfare systems operator with Helicopter Anti-Submarine Squadron 14.

In the ship news report, Romiti, also an aviation warfare systems operator with HS-14, described the rescue as almost surreal. &#8220;As soon as I hit the water, my adrenaline shot through the roof,&#8221; he stated in the report. &#8220;I did everything I was trained to do when it comes to rescuing people in the water.&#8221;