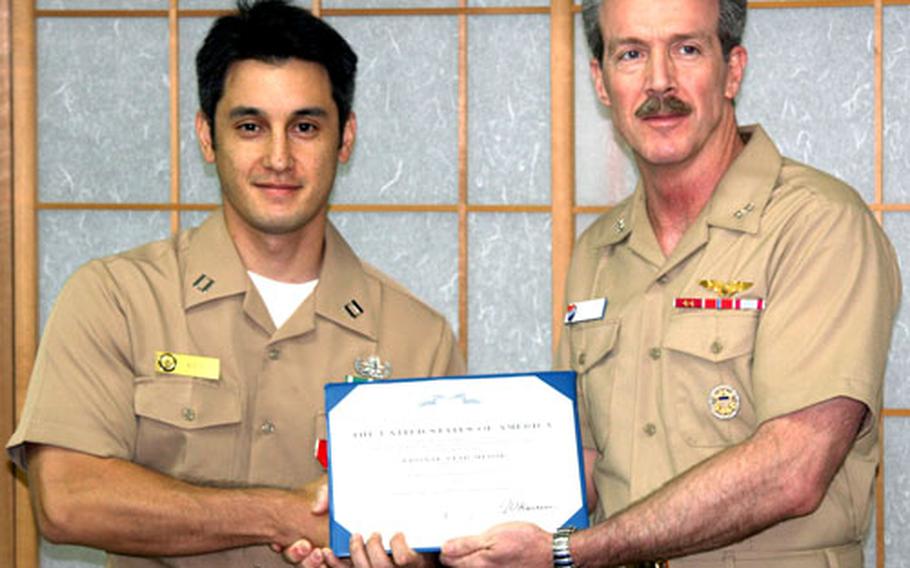 In 2007, Lt. Sean Kido was in a convoy in Iraq that was hit by two roadside bombs, resulting in the deaths of two coalition personnel.

Kido, then the explosive ordnance disposal officer in charge of Special Operations Task Force&#8212;West, "calmly took charge of the situation."

Kido and his team swept the area for other dangers and coordinated air support and evacuations for the injured.

"His (Kido&#8217;s) quick thinking and bravery ensured the rest of the force returned safely," stated the award citation when Kido was honored for valor this month aboard the USS Kitty Hawk. Kido received the Bronze Star medal with a Combat "V" aboard the ship July 2, the day after the carrier reached his home state of Hawaii for the Rim of the Pacific exercise.

Kido is now the officer in charge of the aircraft carrier&#8217;s EOD team.

Kido&#8217;s citation credits him with leading his 12-man team in more than 150 missions during his six-month deployment in Iraq from April to October 2007, according to a Navy news release. Their efforts contributed to the capture of 315 known or suspected insurgents, and the seizure and destruction of 198,000 rounds of small-arms ammunition and 2,600 pounds of ordnance, the release said.

Kido, who declined an interview with Stripes, called receiving the award "a bittersweet honor," the release said.

"Looking back to my time in Iraq and knowing that we did a lot of good stuff; we took the right guys off the street, cut off their resources in obtaining materials for [improvised explosive devices] and made the area safer for everyone," Kido stated in the release.

"We really helped turn the tide, especially in western Iraq," he said.