One hand on a cell phone, the other waving to his family, a sailor combines a ship built in the 1960s with today’s cellular technology to get back to the ones he loves as quickly as possible. (Chris Fowler / S&S) 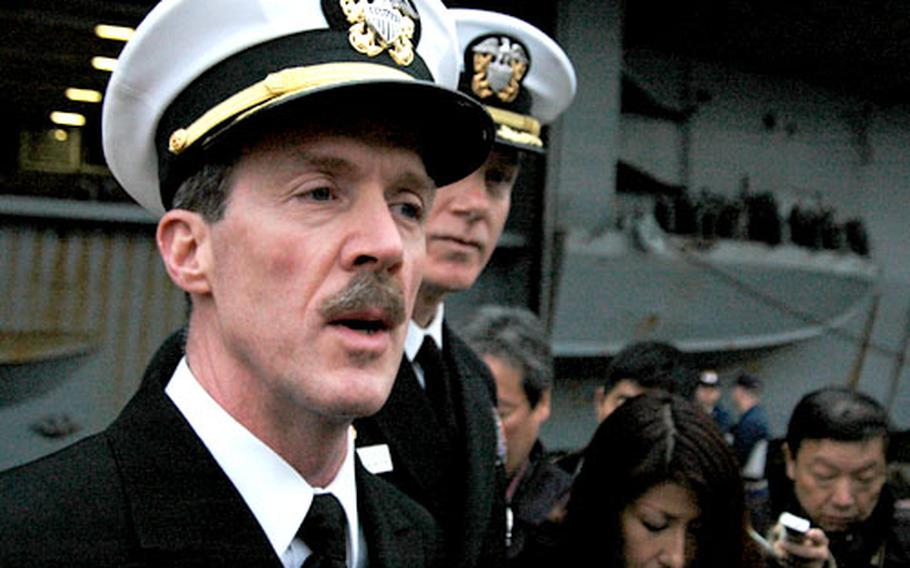 YOKOSUKA NAVAL BASE, Japan &#8212; The USS Kitty Hawk returned to Yokosuka on Tuesday under cloudy skies and a storm of controversy over China&#8217;s decision to deny the aircraft carrier and its escorts port entry to Hong Kong.

While China eventually reversed its decision, it was too late, Wren said, adding that inclement weather prevented any of the ships from pulling into port.

Adding to the disappointment was the fact that the ship&#8217;s Morale, Welfare and Recreation department had reserved blocks of discount-priced hotel rooms for its sailors.

When port of call was officially scrapped, the ship canceled the rooms, leaving many family members without a reservation and saddled with paying the full price for those rooms.

Diana Salansky, the wife of Kitty Hawk&#8217;s administration officer, said between airline tickets and her hotel room, she paid almost $2,500.

According to Kitty Hawk commanding officer Capt. Todd Zecchin, the ship&#8217;s MWR department is working to identify crewmembers whose families were left without reservations and had to pay full price.