USS George Washington will arrive at Yokosuka on Sept. 25 Sisters Desirae, left, and Destiny Arellano are ready to give the USS George Washington a warm welcome, they said. (Allison Batdorff / S&S) 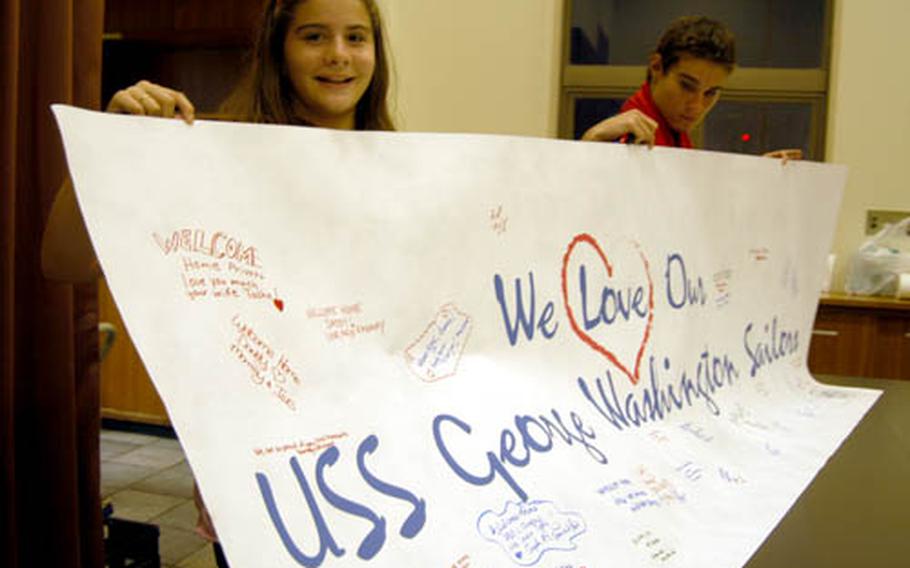 The George Washington is the first nuclear-propelled ship to be forward-deployed to the Japan-based U.S. 7th Fleet.

The George Washington&#8217;s arrival will provide the "most advance capabilities" to aid in Japan&#8217;s defense and to maintain "international peace and stability" in the region, a Navy release said Friday.

Japan&#8217;s Ministry of Foreign Affairs also announced its welcome of the George Washington, adding that it received assurances from the U.S. government that "it will strictly honor all of its previous commitments regarding the safety of U.S. nuclear vessels."

The George Washington is more than 1,000 feet long and can carry more than 5,600 people aboard, the Navy release said.

A few days after arrival, the carrier is expected to sail to South Korea to be portside in Busan Oct. 5-10 for the country&#8217;s International Fleet Review marking its navy&#8217;s 60th anniversary, South Korean officials said recently.

U.S. Navy officials from 7th Fleet and Commander Naval Forces Korea confirmed there would be U.S. participation in the event, but declined to comment on whether the USS George Washington would be on hand.