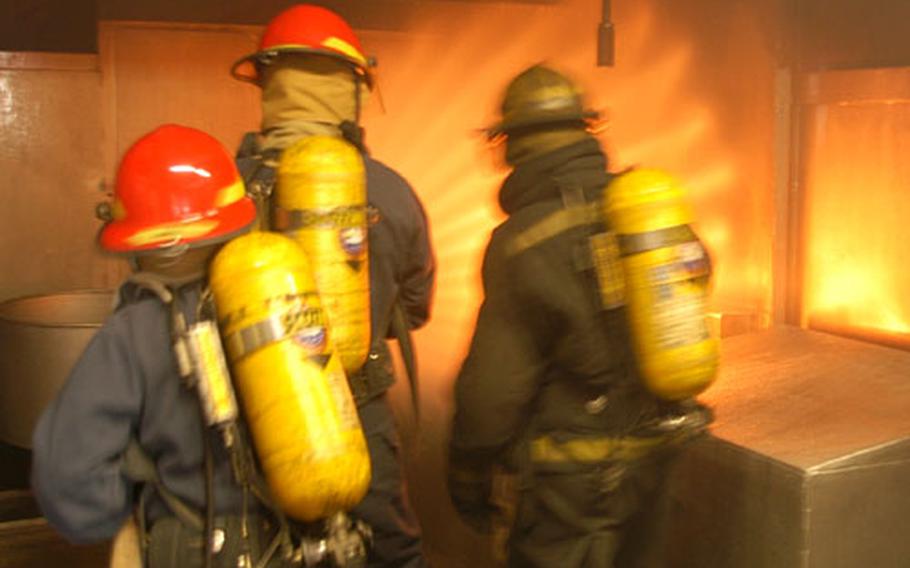 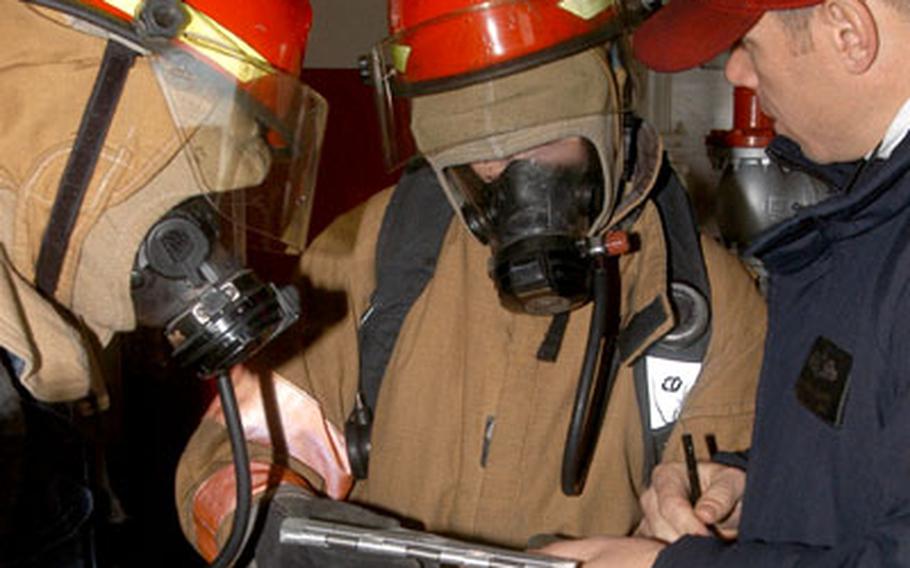 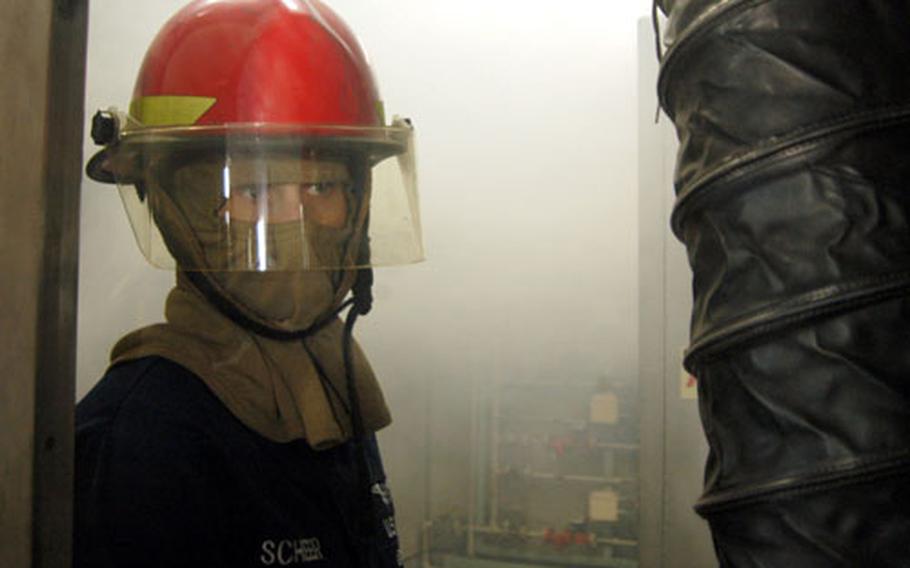 YOKOSUKA NAVAL BASE, Japan &#8212; On May 22, Petty Officer 3rd Class Travis Parent clocked out after a hard day&#8217;s work aboard the aircraft carrier USS George Washington.

As he made his way toward his bunk, he made an offhand remark to a few friends.

"I said to the guys if I go to sleep, something&#8217;s going to happen," said Parent, of Biddeford, Maine.

Shortly afterward, a fire broke out below decks. Parent was a primary responder.

Time became hazy for Parent, after rushing through the smoke-choked decks, putting out flames and pulling people to safety.

He remembers fighting the fire for 12 hours, maybe more. Patrolling for flare-ups afterward took a few more hours. The fire caused $70 million in damage and injured 37 crewmembers, the Navy said.

Last week, Parent and 27 others from the George Washington were back fighting fires in a much more controlled environment at the Center for Naval Engineering&#8217;s Advanced Shipboard Firefighting course.

Although every sailor learns firefighting skills during basic training, the advanced course challenges sailors on topics such as managing a team, choosing equipment and maneuvering around near-molten machinery.

"No matter how good you are, [this course] takes a toll on anybody," said Chief Petty Officer Joseph Garrido of Agat, Guam. "It&#8217;s a million things thrown at them at one time."

Sailors worked with far more than hoses during the course, which lasted from Monday through Thursday.

They learned to operate the P-100 pump, which at 83 pounds per square inch of pressure can remove 100 gallons of water per minute from a flooded area, firefighters said.

Another class featured the Portable Exothermic Cutting Unit, or PECU. With a spark to ignite, the cutting rod uses oxygen and power to cut through steel bulkheads.

The sailors used two types of fans &#8212; one electric and one manually powered &#8212; with the ability to clear thousands of cubic feet of smoke per minute from a room.

Torres was also a primary responder during the George Washington fire.

The skills being taught at the workshop were particularly important for the sailors with only basic training experience.

"We&#8217;re all firefighters before anything else," Torres said.

Only a few of the attendees had previously taken advanced courses.

Petty Officer 2nd Class Michael Ramirez of El Paso, Texas, had only worked with a hose in basic training before the May 22 fire. When the alarm first rang that day, he thought it was a drill.

Later on, Ramirez found himself searching for trapped sailors. The smoke became so heavy that he flipped on his thermal imaging unit.

Ramirez kept those memories in mind while taking the course, hoping to learn all he could.

"It definitely changed my point of view on training, seeing the mistakes and casualties [during the fire]," he said.

The sailors worked well with each other during the training, Garrido said. But in a real emergency, they might be working with sailors with less experience. That will make practicing their skills all the more important.

"If they keep training to it, it&#8217;s going to become natural," Garrido said.