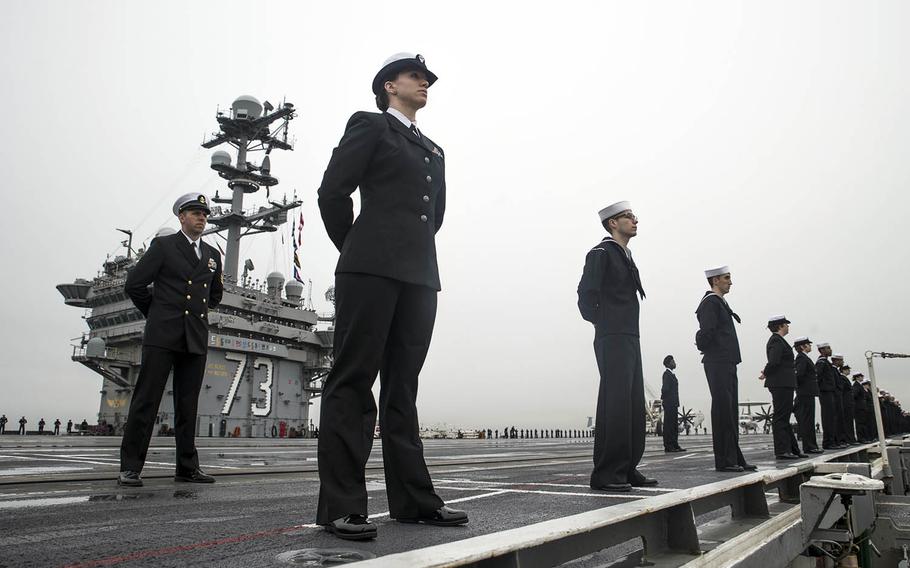 Sailors man the rails on the flight deck of the USS George Washington as the aircraft carrier arrives in its new homeport of Naval Station Norfolk, Va., Dec. 17, 2016. (Bryan Mai/U.S. Navy)

YOKOSUKA NAVAL BASE, Japan — The USS George Washington could be outfitted to host aerial drones and regain its position as the nation’s only forward-deployed aircraft carrier, according to the fiscal year 2019 National Defense Authorization bill.

The carrier — which was homeported at Yokosuka for seven years before being replaced by the USS Ronald Reagan in 2015 — is undergoing a four-year midlife refueling and overhaul in Virginia that began last fall.

The House Armed Services Committee chairman’s mark summary of the bill requires the Navy to incorporate MQ-25A Stingray combat drones on the George Washington “to ensure that our only forward deployed carrier is equipped with the first carrier-based [Unmanned Aerial Vehicles].”

The bill also requires “the Navy to fund the modification of [the USS George Washington] during its refueling and overhaul period in support of future MQ-25 unmanned carrier aircraft operations.”

A legislative aide confirmed the George Washington “will return to Japan following its [refueling and overhaul] and that the current forward-deployed carrier, USS Ronald Reagan, will return to the U.S.,” according to a U.S. Naval Institute report published last week.

A Navy spokeswoman told Stars and Stripes such a move has not been formally decided.

“U.S. Navy long-range planners constantly evaluate whether ships, aircraft, and equipment are being used effectively and efficiently,” said Lt. Marycate Walsh of the Navy Office of Information at the Pentagon. “The Navy monitors force readiness and capabilities to provide the most robust capable maritime force possible. Decisions for this and other carrier homeport assignments will be announced when appropriate.”

The Boeing-designed MQ-25 is designed to provide the Navy with refueling capabilities that would extend the combat range of deployed F/A-18 Super Hornet, EA-18G Growler and F-35C fighters.

The service’s 2019 proposed budget requests $719 million for MQ-25A Stingray tanker research and development. Officials have said the service expects to purchase its first four MQ-25As in 2023, and have them reach initial operational capacity in 2026, according to the USNI report.

For now, the Ronald Reagan will remain homeported at Yokosuka, where its sailors are preparing for their upcoming 2018 deployment.