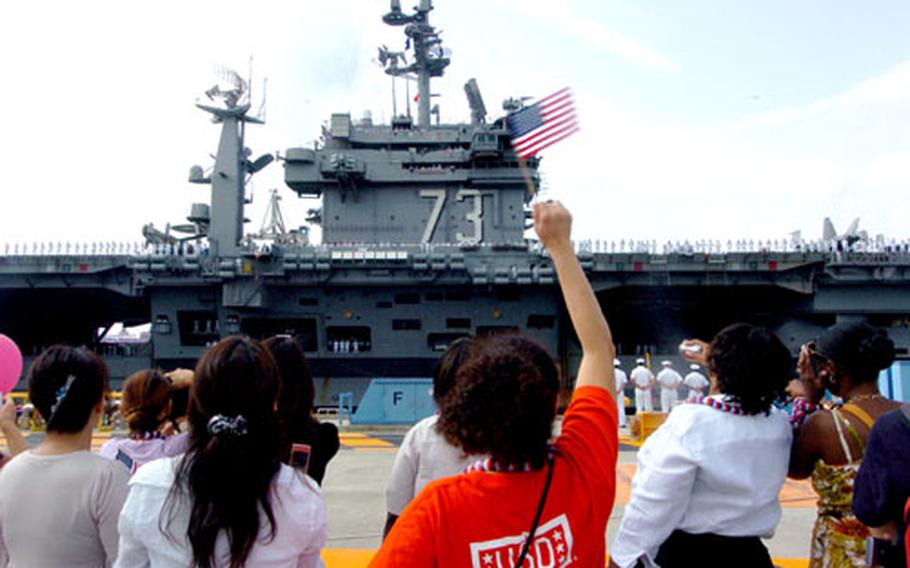 YOKOSUKA NAVAL BASE, Japan &#8212; Thousands of people crowded onto Yokosuka Naval Base&#8217;s Pier 12 on Thursday to welcome the aircraft carrier USS George Washington to its new home in Japan.

The historic significance of the event was repeatedly emphasized by U.S. Navy and Japanese military officials, as the George Washington is the only nuclear-powered ship to be forward deployed to Japan.

"I think this is beautiful," said Chief Petty Officer Cleo Bowie, who was among a smaller group of George Washington sailors who arrived ahead of the ceremony. "A lot of people maybe haven&#8217;t really taken it in yet, but once all the dust has cleared, then they&#8217;ll start to really see &#8212; it&#8217;s history."

"More than 60 years ago a long and bitter struggle came to a close," U.S. Ambassador to Japan J. Thomas Schieffer said about the two countries&#8217; warring past.

"Neither of us could have imagined the event that we witness today &#8212; the forward deployment of an American nuclear-powered aircraft carrier, not to subjugate Japan but to defend Japan," he said.

That sentiment didn&#8217;t assuage all concerns in Yokosuka, a former Imperial Navy base about 60 miles southwest of Tokyo.

Off base, the ship&#8217;s arrival spurred protests throughout the day, including a group who shouted "George Washington go home now" outside the base as the carrier cruised into the military-controlled port.

Pier-side, families waited happily for their reunions. Japanese drums thundered and onlookers cheered as the carrier pulled into view shortly after 9 a.m. Sailors from the carrier who had arrived earlier in the month handed out balloons and took pictures of themselves on the pier.

The carrier left Norfolk, Va., in April, and a May fire while at sea caused its arrival to be delayed by more than a month. More than 240 families moved to Yokosuka ahead of the sailors. Some hadn&#8217;t seen their sailors in months.

"I&#8217;m going to eat cake with my dad," said Cameron Stanley, who turned 9 on Wednesday and planned to celebrate with his father, Chief Petty Officer Jason Stanley, who works on the flight deck.

By 10 a.m., tugs nudged CVN-73 backward into its refurbished pier, part of the military&#8217;s $67 million investment in getting Yokosuka ready for the Nimitz-class carrier. As families and sailors eagerly waited, Rear Adm. James D. Kelly, commander of U.S. Naval Forces Japan, warmed up the crowd.

"In case you didn&#8217;t know, the George Washington is here," he cheered at 10:04 a.m. as the crew tossed the mooring lines ashore and prepared to open the brows.

The ship&#8217;s arrival "is a sign of the unshakable alliance between our two countries and marks a new milestone in the history of our cooperation," Akahoshi said through a translator.

Other Japanese officials were less enthusiastic with Thursday&#8217;s historic change.

"I don&#8217;t necessarily welcome the ship itself," said Yokosuka Mayor Ryoichi Kabaya, an early critic of the George Washington&#8217;s assignment to Japan. "But I would like to welcome the [ship&#8217;s] capability and the crew."

After the ceremony ended, sailors strode into their first ship-wide liberty in months. Most junior enlisted sailors with the George Washington were under rules to be back on base by 11:30 p.m.

"Keep the drinking under control," said Seaman Christopher Dingman, a machinist&#8217;s mate, offering some advice to his fellow sailors. Dingman, 22, from Sandpoint, Idaho, had been assigned on the Kitty Hawk. "Otherwise you&#8217;ll be restricted the next month and a half."

After the ceremony, Haley, the carrier&#8217;s commander, acknowledged that the arrival was more like a port call than a homecoming for the ship&#8217;s crews of 3,000 sailors and the 1,500 personnel from Carrier Air Wing 5 at the nearby Naval Air Facility Atsugi.

The ship is expected to leave next week and be portside in Busan in early October for South Korea&#8217;s International Fleet Review marking the navy&#8217;s 60th anniversary, according to South Korean officials.

In a couple of months, Haley said, there will be a real homecoming. "You can actually go get your driver&#8217;s license and sit down at dinner with your families," he said.

A long wait over: Families reunited

Making room for the George Washington

And now, a word from our sponsors

Pizza with corn and mayo? Getting used to life in Japan may take some time

Families eagerly waiting for their sailors

A reporter&#8217;s guide to being a happier gaijin

In Japan, one beer could equal three years in jail