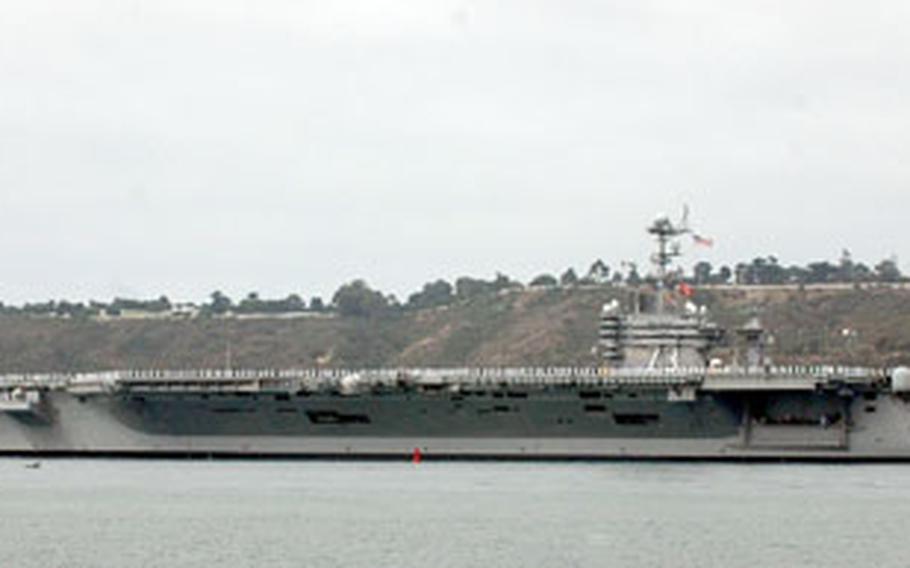 The USS George Washington left the San Diego’s North Island on Thursday on its way to Japan. (Don Bray/Courtesy of the U.S. Navy)

YOKOSUKA NAVAL BASE, Japan &#8212; The USS George Washington started its journey to Japan on Thursday after a several-month layover in San Diego for repairs.

The aircraft carrier is due to arrive here late next month to become the largest ship in the U.S. Navy&#8217;s forward-deployed naval forces. It also will be the first nuclear-powered ship ever forward-deployed to Japan.

It replaces the 48-year-old conventionally-powered USS Kitty Hawk that was stationed in Yokosuka for a decade.

The carriers&#8217; scheduled swap was delayed after a May 22 blaze aboard the George Washington left 37 sailors with minor injuries and caused $70 million worth of damage. Navy officials have since said that unauthorized smoking sparked the fire and officials subsequently relieved both the George Washington&#8217;s commanding officer and executive officer.

The ship left San Diego&#8217;s North Island on Thursday with Capt. John R. Haley at the helm, according to a Navy news release.

The George Washington is carrying a full crew of about 5,500, including personnel from the Japan-based Carrier Air Wing 5, Destroyer Squadron 15 and Command Task Force 70, the release said.

"It&#8217;s a historic event," Steiner said. "We look forward to having more capabilities for the Japanese-American alliance."

The Kitty Hawk is in San Diego and will soon make its way to Bremerton, Wash., for decommissioning sometime next year, the release said.