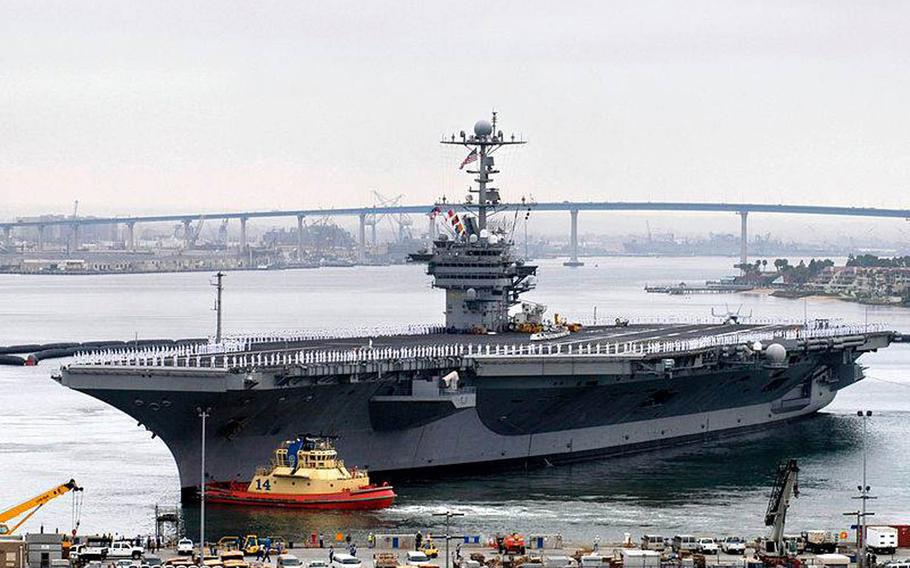 The aircraft carrier USS George Washington arrives at Naval Air Station in San Diego on Aug. 10, 2015. The crew will soon conduct a hull swap with the USS Ronald Reagan. (Courtesy of the U.S. Navy)

YOKOSUKA NAVAL BASE, Japan — The aircraft carrier USS George Washington arrived Monday in San Diego, where most of its crewmembers will disembark and assume their new roles aboard the USS Ronald Reagan.

Thousands of sailors aboard each carrier will swap ships over the next 10 days, Navy officials said.

Once transferred, Reagan’s new sailors will conduct a flight certification for its embarked air wing and make other adjustments before heading back toward the Asia-Pacific region, officials said.

“For training of new crews, each ship will go through a tailored syllabus following the crew swap,” George Washington commanding officer Capt. Timothy Kuehhas said in a statement.

Kuehhas and some other key personnel will remain with George Washington as it takes on a complement of Reagan sailors.

George Washington will then head around South America and eventually stop in Newport News, Va., where it will undergo a mid-life nuclear refueling and overhaul expected to take three to four years. The multibillion dollar project will refuel both of the ship’s reactors, repair the propulsion plant and upgrade several other systems.

Several Reagan sailors serving briefly aboard George Washington will join the informal “Three Presidents” club this year. After George Washington arrives in Virginia for its overhaul, they will leave and join the permanent crew of the USS Theodore Roosevelt.

Meanwhile, Reagan will replace George Washington as the Navy’s forward-deployed carrier in Japan when it arrives at Yokosuka Naval Base in the fall.

The transfer of Reagan, which is the second-youngest of the Navy’s Nimitz-class carriers, is part of a Pentagon effort to place more of its advanced hardware in Japan.

The recently overhauled destroyer USS Benfold is expected to reach its new Yokosuka homeport later this year, while the destroyer USS Milius is scheduled to make Yokosuka its new home in 2017. The upgraded USS Barry will replace USS Lassen sometime in the next year.

The Navy has also rotated its new P-8 surveillance planes to the region, while upgrading its deployed jet and helicopter squadrons in recent years.