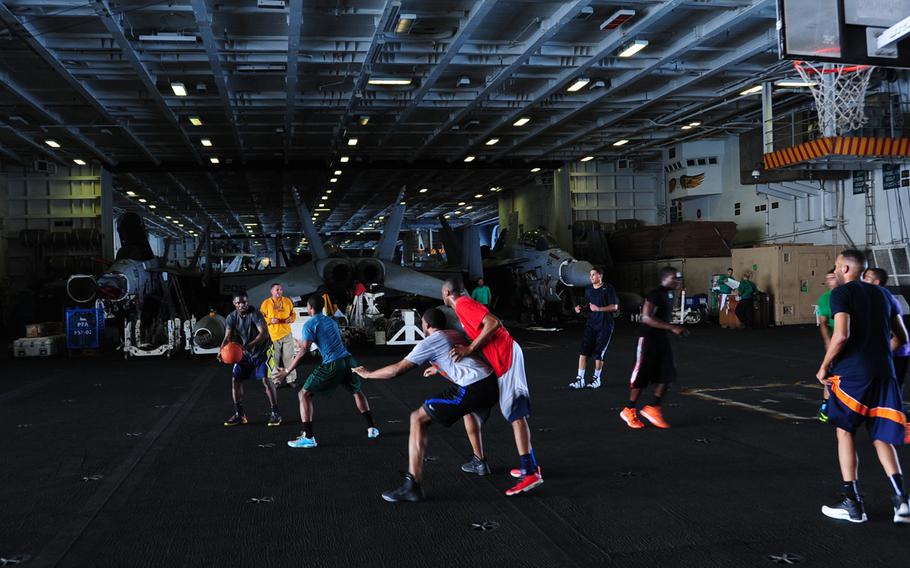 MANAMA, Bahrain — The aircraft carrier USS George H.W. Bush arrived here Sunday for a routine port visit for necessary maintenance and to give its crew time away from the ship, U.S. 5th Fleet officials said.

Bahrain is the second port visit for the more than 5,000 sailors and Marines aboard the Norfolk, Va.-based carrier since Aug. 8, when planes from the ship began conducting airstrikes on the positions of the Islamic State in Iraq and Syria. Last month the ship visited Dubai.

Other U.S. military air assets and coalition partners will fill the gap while the Bush is in Bahrain.

The Makin Island amphibious ready group, which relieved the Bataan group in September, is in the region supporting operations in Iraq and Syria. The group brings with it a variety of aircraft: MV-22B Ospreys, AV-8B Harriers, CH-53E Super Stallions, AH-1Z Super Cobras and UH-1Y Hueys.

The aircraft carrier USS Carl Vinson is heading to the Persian Gulf to relieve the Bush but has not yet entered the region, officials said.

Navy Morale, Welfare and Recreation officials said they have organized plenty of tours, entertainment and activities for the ship’s crewmembers so they can enjoy their visit to the Persian Gulf island nation. “We want to keep them energized,” said Raymond Santiago, MWR Bahrain’s recreational director.

The Bush left home Feb. 15 and is in the midst of a nine-month deployment to the 6th Fleet and 5th Fleet areas of responsibility.