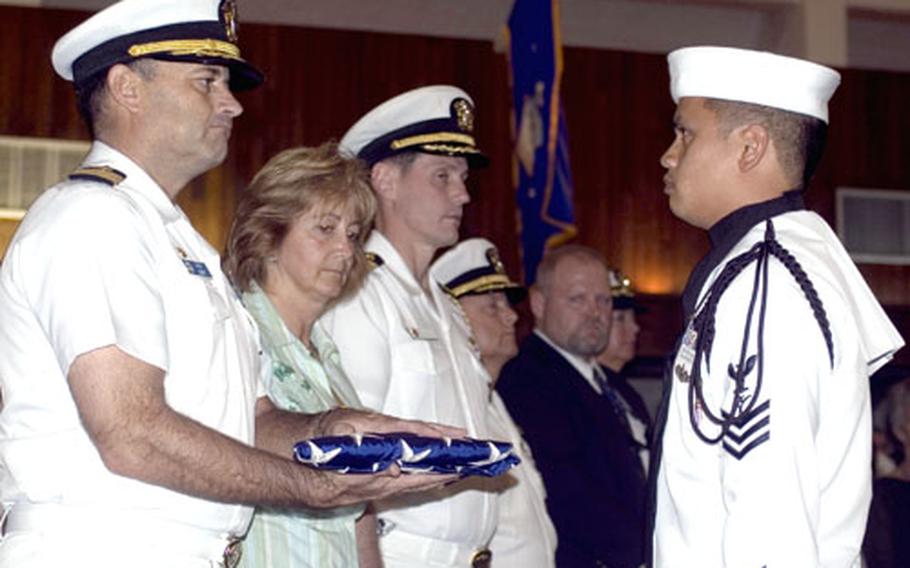 Guam sailors honored Seaman Jack B. Valentine of the USS Frank Cable at a memorial ceremony Sunday on Guam, according to a U.S. Naval Base Guam news release.

Valentine, 20, of Zion, Ill., died Thursday from injuries suffered from a ruptured steam pipe aboard the submarine tender Dec. 1. A machinery repairman, he was one of six sailors transported to Brooke Army Medical Center at Fort Sam Houston, Texas, after the accident.

At the base chapel ceremony, Capt. Leo Goff, Cable&#8217;s commanding officer, said that Valentine was on watch the night of the accident, according to the news release, &#8220;protecting his freedom, protecting his country, serving his family, serving people he didn&#8217;t know all over the nation.&#8221;

A Navy investigation into the accident is continuing and damage is being assessed while the Frank Cable remains in Guam.

As of Friday, four of the injured sailors remained in very serious condition. No new information about their condition was available Monday. The accident occurred after the ship had returned to Guam&#8217;s Apra Harbor after a daylong &#8220;Friends and Family Cruise.&#8221;