USS Fort Worth skipper relieved for role in engineering accident 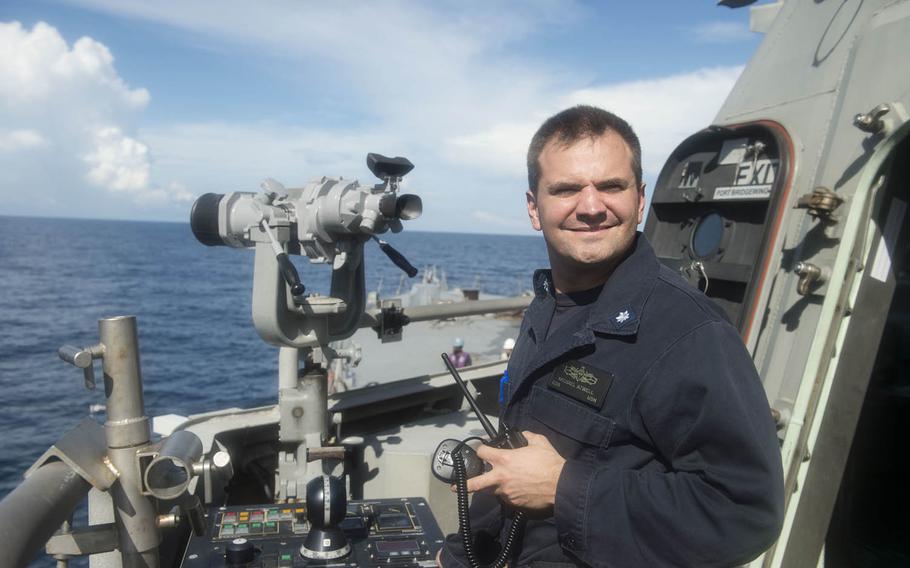 Cmdr. Michael Atwell, USS Fort Worth commanding officer, observes an underway replenishment in the South China Sea, Nov. 11. 2015. Atwell has been removed by Rear Adm. Charles Williams, head of the Singapore-based Task Force 73, because of a loss of confidence in Atwell's ability to command, according to a Navy statement issued Tuesday, March 29, 2016. (Antonio Turretto/U.S. Navy photo)

The commanding officer of the littoral combat ship USS Fort Worth’s Crew 101 has been relieved following an investigation into a January engineering accident.

Cmdr. Michael L. Atwell was removed by Rear Adm. Charles Williams, head of the Singapore-based Task Force 73, because of a “loss of confidence” in Atwell’s ability to command, according to a Navy statement issued Thursday in Hawaii.

The accident occurred Jan. 12 in Singapore, when the crew started the main propulsion diesel engine and damaged the ship’s combining gears because of a lack of oil.

“The insufficient flow of lube oil resulted in high temperature alarms on the port and starboard combining gears,” U.S. Pacific Fleet spokesman Lt. Clint Ramsden wrote Tuesday, in response to a Stars and Stripes query. “The casualty appears to have been caused by a failure to follow established procedures during maintenance.”

In November 2014, Fort Worth became the second littoral combat ship, or LCS, to begin a deployment to the Asia-Pacific.

The accident appears to have altered the length of its planned 16-month deployment; the San Diego-based ship is still in Singapore, Navy officials said Tuesday.

The Navy is still considering how and where it will repair the ship, Ramsden said.

Fort Worth rotates three crews of about 50 sailors during deployment; sailors specific to the ship’s mission add about 50 more personnel.

The LCS concept and its capabilities have been hotly debated within the Pentagon and Congress since development began in the 2000s with significant cost overruns.

The Navy originally called for 52 of the fast, shallow-draft ships to be built. Concerns about the ship’s survivability in combat led the Pentagon to split the program into 32 LCS models and 20 heavier, frigate versions of the ship.

In December 2015, Defense Secretary Ash Carter directed the Navy to cut the program to 40 ships.

The LCS was designed to swap out equipment designed for three missions: surface warfare, antisubmarine warfare and mine countermeasures.

A Defense Department report in January stated that the surface warfare package has “demonstrated a modest ability to aid the ship in defending itself against small swarms of small boats, and the ability to conduct maritime security operations.”

The Navy has “not yet demonstrated effective capability” for the ship’s other two roles, according to the report.