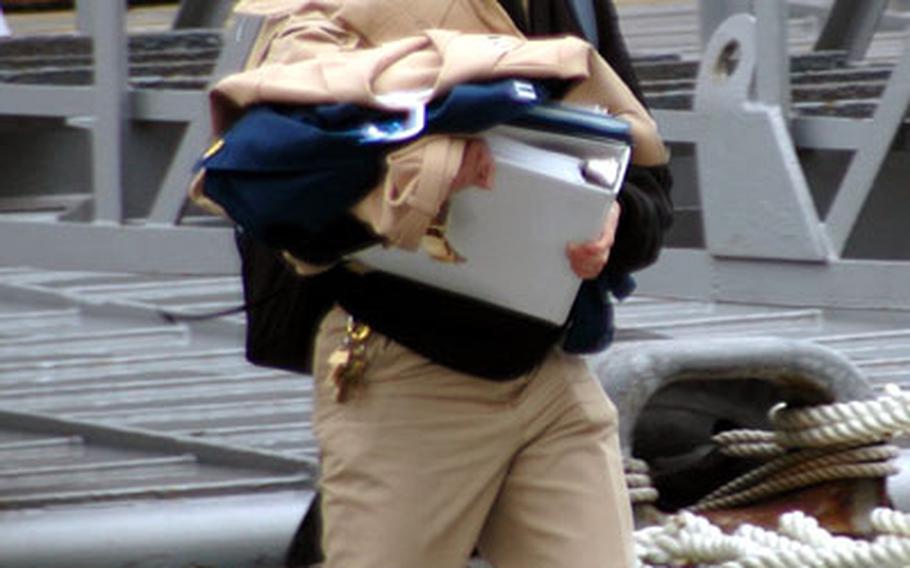 A sailor from the amphibious dock-landing ship USS Fort McHenry crosses a platform Wednesday afternoon en route to the well deck of the USS Tortuga while moving personal items to her new ship. (Greg Tyler / S&S)

SASEBO NAVAL BASE, Japan &#8212; On a floating platform linking the USS Fort McHenry and USS Tortuga, sailors strolled past each other Wednesday carrying personal gear and other materials to their new ships.

The Whidbey Island-class amphibious dock-landing ships are berthed stern-to-stern in India Basin for a hull exchange slated to be complete this month.

Commissioned in 1990, Tortuga arrived in Sasebo last week after steaming 11,000 miles from Naval Amphibious Base Little Creek, Va. After the swap, the Fort McHenry, commissioned in 1987 and operating from Sasebo since 1995, will steam with the current Tortuga crew to its new permanent base at Little Creek.

&#8220;The Tortuga arrived with a more robust communication system than the Fort McHenry,&#8221; said Lt. Edward Sisk, Command Task Force 76 spokesman. &#8220;So initial familiarization training and operational tests will be conducted to ensure the Fort McHenry sailors are up to speed.&#8221;

He said both ships have the same weapons systems, can carry and operate helicopters and various landing crafts and serve as an amphibious-forces sea base for extended periods.

Tortuga&#8217;s engines recently were overhauled, Sisk said, and so will require little technical adjustment. &#8220;It will just be a matter of familiarization training for the crew in the engineering spaces.&#8221;

Near the end of the swap, the Fort McHenry and Tortuga will conduct shipboard drills and exercises involving engineering, communications, firefighting and general quarters, he said, &#8220;to make sure the crews are able to safely operate the ships.&#8221;