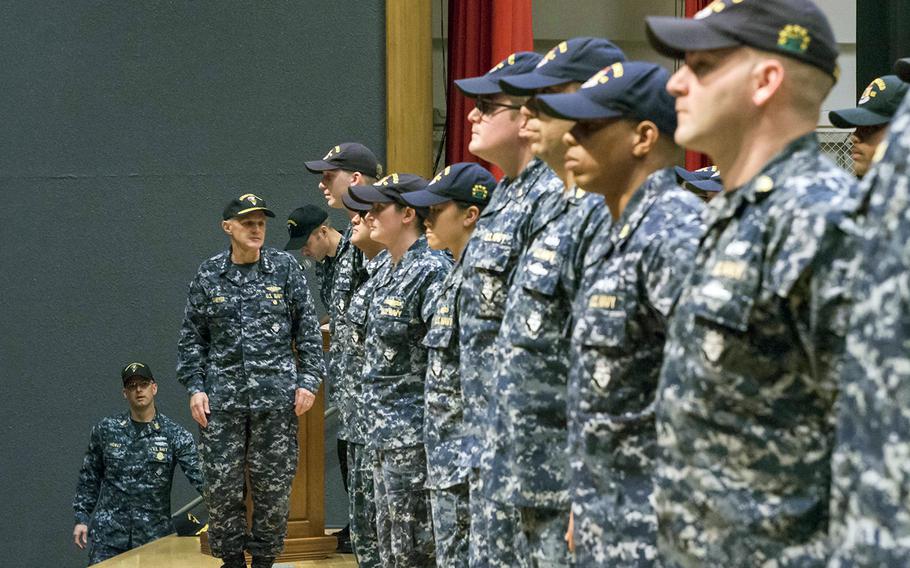 YOKOSUKA NAVAL BASE, Japan — The Navy lauded a number of USS Fitzgerald sailors Friday for their emergency response efforts after a deadly collision on June 17.

The crew members “fought back against progressive flooding across 19 spaces for more than 16 consecutive hours” while working under hazardous conditions due to flooding and noxious fumes, as well as the risk of electrocution, the statement said.

An initial report into the collision released by the Navy in August detailed the terror sailors experienced in the moments after the accident, along with the heroic efforts sailors took to save lives.

The collision happened about 1:30 a.m. when the destroyer was struck by the ACX Crystal, a Philippine-flagged merchant ship. The Fitzgerald was struck on its starboard side, tearing an approximately 13-by-17-foot hole that flooded a berthing area housing 35 sailors. Twenty-eight escaped and seven perished.

Investigating Officer Rear Adm. C.F. Williams said in the report that the flooding of Berthing 2 was unavoidable, but that sailors’ prevented an even worse tragedy.

“The sailors assigned to Berthing 2 should be commended for their response to the dangerous and deadly threat they faced,” Williams wrote. “They fought hard in the dark of night to save their ship. Through their swift and in many cases, heroic actions, members of the Fitzgerald crew saved lives.”

The Navy relieved the Fitzgerald’s commanding officer, Cmdr. Bryce Benson, in August for what it called an “avoidable” collision.

The ship’s executive officer and senior enlisted sailor were also relieved, and a slew of officer and enlisted watch standers were held accountable, with the Navy citing “flawed watch stander teamwork and inadequate leadership” as well as “poor seamanship” from both the Fitzgerald and the ACX Crystal as contributing factors to the collision.

The Fitzgerald will be taken to an Ingalls Shipbuilding facility in Pascagoula, Miss., via heavy-lift ship this fall for repairs.

The Navy decided to transport the Fitzgerald back to the U.S. to free up space along Yokosuka’s waterfront for other 7th Fleet ships needing maintenance, 7th Fleet Spokesman Cmdr. Clay Doss said in a previous statement.

The Fitzgerald’s sister ship, the USS John S. McCain, will be repaired at Yokosuka, because Navy officials said the destroyer suffered less damage. An Aug. 21 collision between the McCain and an oil tanker killed 10 crew members.