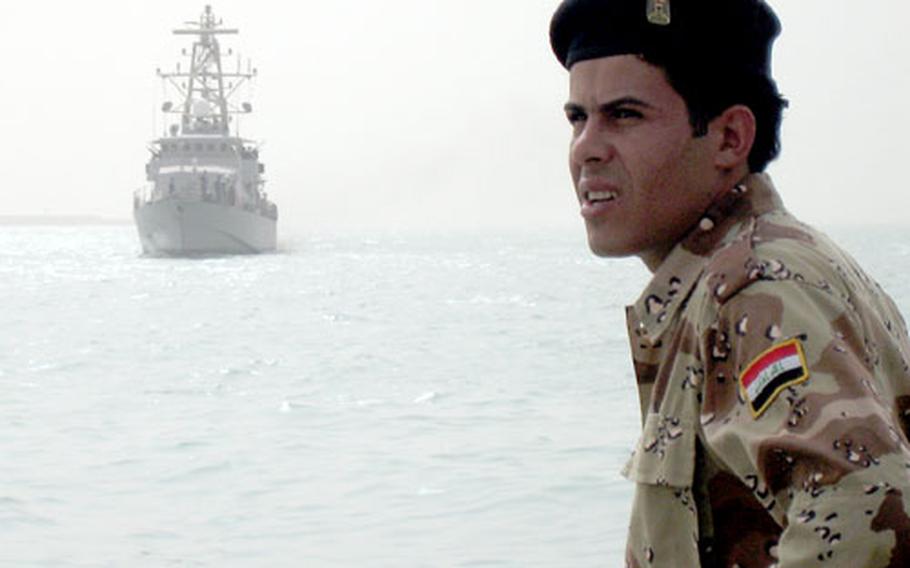 An Iraqi sailor looks on from the pier as the USS Firebolt transits the Khawr Abd Allah River towards the port of Umm Qasr, Iraq. Firebolt&#39;s visit was the first by a U.S. ship to Iraq in more than 15 months. (Nathan Christensen / U.S. Navy)

The USS Firebolt pulled into the Iraqi port of Umm Qasr on Wednesday, marking the first visit by a U.S. ship to Iraq in more than 15 months, according to U.S. Navy officials.

Security improvements made by the Iraqi navy allowed for the U.S. cyclone-class patrol coastal boat to pull into port, Navy leaders said in a 5th Fleet press release.

"There has been significant progress in Iraq during the past year and a half that allowed Firebolt to make this port visit to Umm Qasr," Rear Adm. Thomas Cropper, deputy commander of U.S. Naval Forces Central Command, said in the statement.

"Our port visit to Umm Qasr demonstrates the great confidence we have in our Iraqi partners, and reflects the marked improvements in security that they have achieved within the past several months," added Lt. Cmdr. Trent Thompson, the ship&#8217;s commanding officer.

While conducting an inspection of the Khawr Al Amaya Oil Terminal, senior Iraqi naval officers and members of the Naval Transition Team discussed ways Iraqi and coalition forces would work to protect Iraq&#8217;s key maritime infrastructure in the Persian Gulf.

The KAAOT and Al Basra Oil Terminal, or ABOT, are two strategic Iraqi oil terminals in the Persian Gulf that supply about 80 percent of Iraqi&#8217;s gross domestic product, and are key to the region&#8217;s economic growth, stability and prosperity, according to the Navy release.