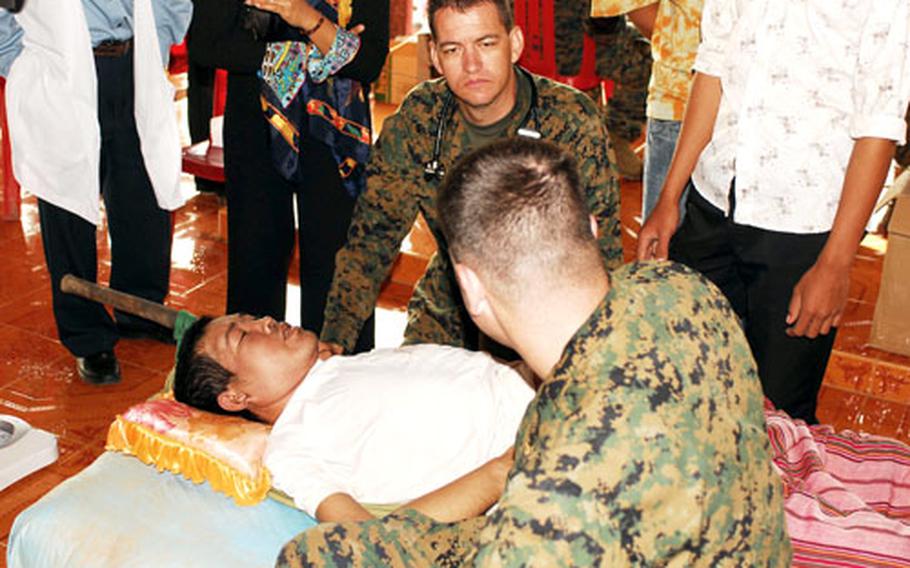 A crowd of Cambodian villagers crouched in the grass watching and waiting intently for treatment.

Inside the temporary clinic in Kampong Cham, a U.S. Navy dentist peered into a local woman&#8217;s mouth as he probed and swabbed away the blood with cotton balls.

It wasn&#8217;t the type of bloodshed that makes news headlines around the world, but the U.S. military hopes some tooth extractions will make an impression on Cambodian residents.

During a peace mission that wrapped up Sunday, the Sasebo, Japan-based USS Essex &#8212; along with a unit of Okinawa Marines &#8212; spent three days providing medical and dental care to residents of the Kampong Cham region in the Southeast Asian country, according to information released by the U.S. Navy.

The Navy said it hopes the visit will bolster long-standing ties between the two countries and help secure the Pacific region.

In its poverty-stricken countryside, Cambodia has a near total lack of infrastructure and medical services, and the average Cambodian&#8217;s life expectancy is about 60 years, according to CIA statistics.

Primary health care is not available to most of the villagers treated by the Navy and 31st Marine Expeditionary Unit team, which partnered with the Royal Cambodian Armed Forces and non-government organizations, according to Cmdr. Jeff Winebrenner, staff internist.

&#8220;This is the first opportunity I have had out in the field doing this type of mission, and I think we really made a positive impact on these people,&#8221; the doctor said in a Navy press release.

Relations between the two countries strengthened this year because of Cambodia&#8217;s burgeoning garment trade with the U.S., direct U.S. military aid to the county and cooperation on counter-terrorism measures, Prime Minister Hun Sen said during a Phnom Penh press briefing in October, according to a state news service.

The United States curtailed direct aid to the Hun Sen government after it seized power in a 1997 coup d&#8217;etat but relations eased earlier this year.

The USS Essex and the 31st Marine Expeditionary Unit arrived in Sihanoukville, Cambodia, on Nov. 26 &#8212; the second visit by a U.S. Navy ship to the country in 30 years, the Navy said.

While in port, the ship&#8217;s approximately 2,500 sailors and Marines participated in community relations projects, the medical and dental assistance projects and professional military exchanges.

U.S. Navy doctors, dentists and corpsmen from Essex and the 31st MEU medical and dental departments conducted two three-day health clinics for the people of Kampong Cham and the remote village of Kulen, according to the Navy.

&#8220;They have enriched the lives of young children by visiting local schools and interacting with the students,&#8221; said Capt. Brian Donegan, Essex commanding officer, in a prepared statement. &#8220;The medical and dental services sailors and Marines provided improved the health and well being of thousands.&#8221;